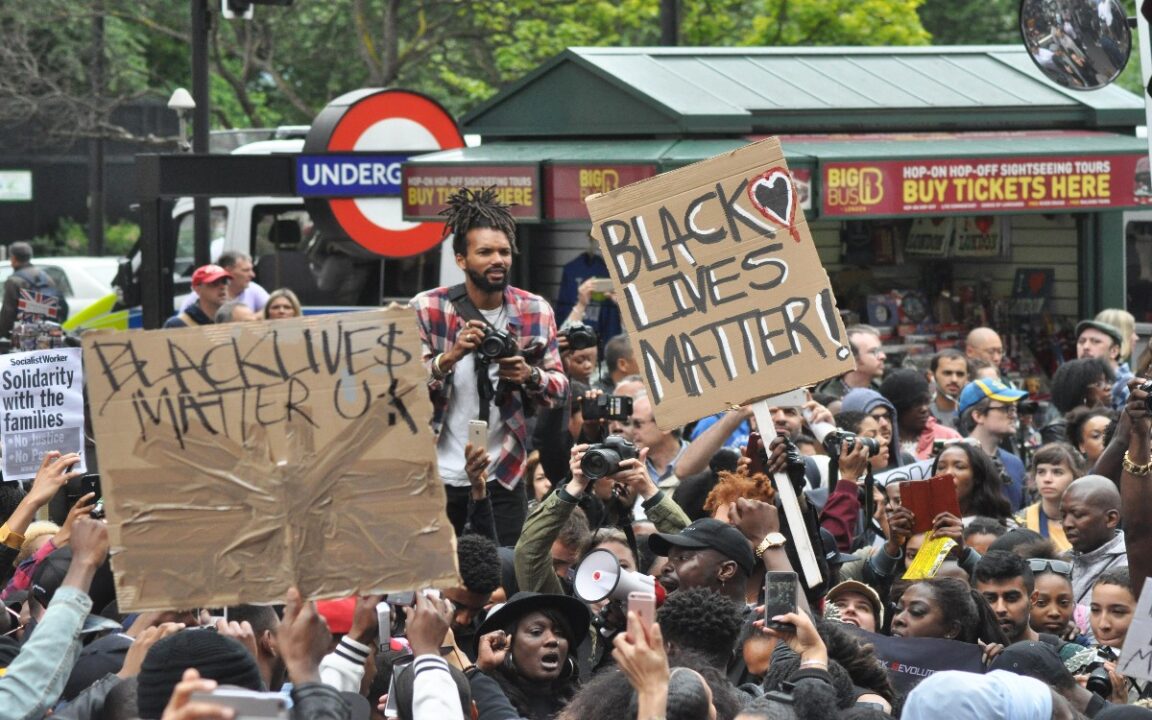 Recently in these pages, we have addressed matters of structural and institutional racism in the context of the ongoing Black Lives Matter protests, and more specifically we have attempted to assess the impact of these demonstrations on our sport (see Jack Gray ‘The Africans. Covert Racism in Endurance Running, June 17th and Matt Long, ‘A Race Which Must Be Run, June 18th).

A hero and credit to our sport

You will recall how track and field was thrown into the spotlight several weeks ago following the actions of Patrick Hutchinson. This occurred when several hundred demonstrators attended a protest at Parliament Square on Saturday 13th, thought to be organised by far right groups, including Britain First.

When violence erupted within the proximity of the Royal Festival Hall, the image of the Hercules Wimbledon sprints coach ‘rescuing’ a white male, thought to be a far right protestor, went viral around the world. The instantaneous nature of social media was wonderfully described by eminent sociologists Jeff Ferrell, Keith Hayward Jock Young (2015) as offering “the panoptic gaze of digital citizenry”.

It was indeed what the pioneering photographer, Henri Cartier-Bresson would have referred to as ‘the decisive image’. The image of Hutchinson carrying a clearly concussed man over his shoulder and thus ‘saving’ him from an impending beating, righty saw him receive considerable plaudits for his actions.

His own club took to social media to announce, “What a hero he is and everything that Hercules Wimbledon AC stands for”.

Moreover, when Athletics Weekly reported this, on their social media channels our sports fans endorsed these sentiments. One posted that Hutchinson was the embodiment of ‘Hope’ in these divisive times with another even suggesting that his heroics should be recognised in some way at the Sports Personality of the Year Awards. High praise indeed.

The actions of Patrick Hutchinson were undoubtedly benevolent and it’s beyond question that his association with our sport is a credit. This being said, a more sociologically informed account would encourage us to look not so much at his actions, but rather the presentation of his actions, their packaging and consumption by the mass media.

The aforementioned Ferrell, Hayward and Young (2015) would have us “interrogate the image” rather than to merely accept its appearance at face value. In recent years, visual ethnography has been a growing methodology across the social sciences.

By combining a critical interrogation of the visual we can begin to see some subliminal messages within the ‘story’ of the image. What social scientists refer to as ‘narrative analysis’ offers a series of analytic frameworks whereby researchers interpret ‘stories’ which are told within cultural formations, including news outlets.

Our own coach Patrick Hutchinson! Saved a counter-protester’s life on Saturday with the help of his security team Ark Protection. What a hero he is, and everything that Hercules Wimbledon AC stands for ♥️♥️ #UpTheHerc #WeAreAllOne ✊🏿✊🏻✊🏼✊🏾 pic.twitter.com/fY1rtdeov9

So, let’s apply a narrative analysis to the presentation of both the imagery and discourse/ language around Patrick Hutchinson’s intervention as reported in ‘The Sun’ tabloid newspaper (See Gysin, 2020). By doing so we can uncover a number of what the sociologist Dick Hebdige (1979) referred to as “hidden messages”, which are not immediately apparent but which may permeate our subconscious minds. There are at least four hidden narratives at play:

Narrative 1. The euphemism of ‘rivalry’.

Significantly, Gysin (2020) presents the injured white protestor ‘saved’ by Hutchinson not as a racist thug but more euphemistically as a “far right rival” Whether intentional or unwitting, this presentation frames the injured white man as a ‘deserving’ victim of circumstance.

The Black Lives Matter protestors along with the Far Right protestors can conveniently be presented as participants in a ‘game’ of protest where the match is stopped when such a player gets injured.

No one ‘side’ holds the moral high ground through the lens of this presentation because ‘rivalry’ can get out of hand by ‘unruly fans on both sides’ when the ‘rules of the game’ are forgotten. Hutchinson’s status as the guardian of ‘fair play’ is therefore unquestionable.

Narrative 2. Restraint despite the physicality of the hero

Gyson (2020) is at pains to make the reader aware that Hutchinson is both a Martial arts ‘expert’ as well as a personal trainer. His physicality as a strong, well-muscled black man is emphasised along with the fact that he has managed to restrain his obvious physicality in the face of probable provocation.

He is undoubtedly ‘the better man’ who doesn’t need to resort to violence. A subliminal message could be that other members of minority groups would do well to follow his example of restraint in the face of prejudice and discrimination.

Narrative 3. The assumed benevolence of the police as a state agency

Gyson’s (2020) article tells that, “Patrick took him (the injured man) to the safety of police lines”. Indeed, Chris Otokito who assisted Patrick, reportedly said, “Patrick picked him up and tried to do what we could to hand him back to the safest place he could go”. The fact that it was reported that the Metropolitan police confirmed that no less than 23 officers had been injured and a staggering 113 arrests made, is overlooked in this narrative because the police are the proverbial ‘good guys’.

When interviewed in the days after his intervention, Patrick Hutchinson himself would say, “If the other three police officers that were standing around while George Floyd was murdered had thought about intervening and stopping their colleague from doing what he was doing, George would be alive today”. At the common sense and pragmatic level, Hutchinson was of course right to point this out. This being said, his comments are representative of classic ‘bad apple’ theory.

Structural and institutional racism is ignored – the police are not a rotten barrel- there are merely a few ‘bad apples’ who need rooting out and common sense will win the day. Racism is reduced to a matter of mere interpersonal sensitivity and ‘respect’ between the police as agents of the state and citizens.

Underlying the undoubtedly praiseworthy actions of Hutchinson’s ‘rescue’ is the subliminal message that through their heroics, BAME people can sometimes transcend their ‘blackness’ and gain acceptance as fully fledged and ‘worthy’ citizens. A great example of this cultural process would be that of Mamoudou Gassama, the so-called Malian ‘Spiderman’.

In May 2018, Gassama unbelievably scaled four storeys of an exterior block of flats in Paris in a matter of seconds in order to save a 4 year old child who was hanging precariously from a balcony. Several months later, Gassama had ‘earned’ his right to citizenship following the intervention of President Macron.

At this point, it’s worth reflecting on the difference between social practice and the post hoc articulation of such practice. In simple terms, Patrick Hutchinson ‘walked the walk’ by his actions. The ‘problem’ comes when such people are then asked to ‘talk the talk’.

When thrust into the uncomfortable spotlight of the mass media, Hutchinson scrambled for the right sentiments, one of which was the seemingly contradictory sentiment that, “It’s not black versus white, it’s everyone versus the racists.” Once again this was the ‘right’ thing to say in terms of its reconciliatory tone, but it arguably exonerates the injured man’s alleged allegiance to the activism of the far right.

The real contribution of the undoubtedly heroic Patrick Hutchinson is not in terms of what Kendi (2016) would term an ‘interracial educator’, but rather as a pragmatist. In his own matter of fact words, he recalled that,

“His (the injured man) life was under threat so I just scooped him up on to my shoulders and started marching towards the police with him”.

In this sense, the 49 year old’s real contribution to matters of diversity is as an empathetic ‘doer’ rather than an ideologue. Kendi (2016) traces the tradition of this important contribution both within track and field and in other sports, by making reference to the great Jesse Owens along with the former Heavyweight Champion of the World, Joe Louis, the latter of whom let his fists ‘do the talking’ when he battered Nazi Germany’s Max Smeling to defeat in 1938.

In a similar vein, by winning four Olympic gold medals at the 1936 Berlin Olympics in front of a visibly infuriated Adolph Hitler, Owens cemented his place in history by proverbially urinating on the burning fire of Nazi hatred.

It’s all too often overlooked that 32 years later, he was perhaps reluctantly sent to Mexico by the United States Olympic Committee in order to strongly discourage athletes like Tommie Smith and John Carlos from continuing with their ‘Black Power’ protests. Owens’ best contribution was therefore as a ‘doer’ in 1936 rather than as a ‘sayer’ in 1968. Owens’ was no Martin Luther King Jr or Malcolm X or nor did he ever pretend to be.

The late French philosopher Pierre Bourdieu did much to advance our understanding of the differences between what he referred to as ‘the dispositional’ compared to the ‘attitudinal’. Basically people do things instinctively without being able to articulate in a stylised way why they did it or to fully comprehend the political ramifications of their actions.

The moral of the story is that we should be willing to interrogate the image of Hutchinson’s ‘rescue’. The issue is not what he did or even what he said about what he did afterwards, but the way in which the mass media can wittingly or unwittingly repackage and commodify the image in order to reinforce some very damaging stereotypes about race, racism and citizenship in the year 2020.

For many including myself, Patrick Hutchinson remains a hero, albeit an accidental one and the man himself is deserving of the last word- “It was scary. But you don’t think about it at the time, you do what you’ve got to do”.

Dr Matt Long has authored more than 250 coach education articles and works as a social scientist at Nottingham Trent University. The above are his views alone.