Storming Smith has a little help from his friends 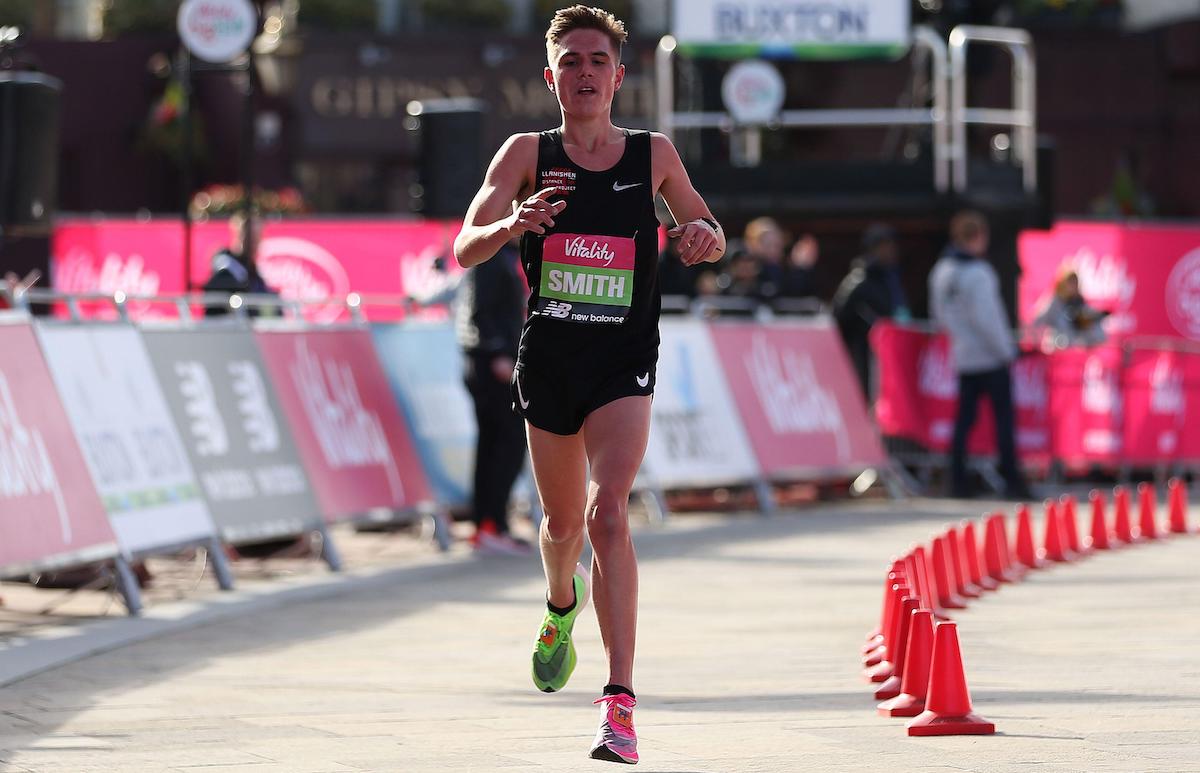 This week, the world of time trialling was taken by storm as Jake Smith ran a stunning 28-minute 10k.

Smith was helped along by the pacing and support of his fellow Cardiff club mates. You can relive his fabulous run on his Instagram feed.

I spoke to Smith about how his training had changed in the build-up to the time trial as a result of lockdown. He told us,

“As we were only allowed out once, I introduced some cross training into my training. I bought a cross trainer (elliptical) and an indoor turbo bike. On normal double days instead, I would do a single run and either a turbo or elliptical in the evening.

I enjoyed this type of training so much as it was different plus it puts less stress on the body. I also introduced shorter reps to try and increase my leg turnover so for longer races the pace should hopefully feel slightly easier.”

Building up to the time trial Smith remarked

“I had done some good sessions but didn’t think I would ever get close to 28 minutes. From my training all I wanted to do was break 28:20 as I feel that is a massive achievement and barrier.

Fortunately, the pacers (Ciaran Lewis, James Heneghan and John Howorth) were amazing and hit every split exactly right. When I went through 5k in 13:59 I knew I was running quicker than I ever had done and just tried to hold that pace for as long as possible.”

Due to the absence of official racing, Smith prepared for the time trial as if it was his own personal race. He didn’t put too much pressure on the situation and relaxed into enjoying the event;

“I prepared for the 10km time trial exactly like a race. It was a lot more chilled compared to a race as I had my best mates pacing and supporting me. I only ran 4 miles the day before then on the day of the time trial went for a small jog in the morning before just relaxing for the majority of the day.

When I got to the track, I just stayed relaxed and started when the track was less busy. After initially being disappointed with his finishing time, it then sunk in what he had actually achieved!”

Am so happy with my 10k TT last night running 28:00.5 on the track. Couldn’t have asked for better pacers @ciaranlewis97 @jamesheneghan and @john_howorth 🎉. Wouldn’t have been able to run that time without them. Now for a few days of rest before starting the next block of training!!!

I asked Smith how he felt throughout the ‘race’ itself;

“For the first 7km I felt amazing. Ciaran Lewis was running anywhere from 400m-800m, trying to jump in when he thought was best to do and the other two, James Heneghan and John Howorth, were swapping at every 800m.

Up until the 7km mark I felt quite relaxed, although with about 7 laps to go I really started to struggle and was asking the pacers to slow down at times. Unfortunately, my 9th km was the slowest which wouldn’t have helped at all. When I crossed the finish line at first, I was gutted as I just missed out on breaking 28 minutes. Then about 30 minutes after the time trial I was so happy and could not believe what I had just achieved.”

The time trial itself has left Jake hungry for more, with goals previously seen as unrealistic now within his reach. It would have placed Jake 9th on the all-time U23 list for 10,000m, and only 14 seconds off placing at the top of the list. As it stands, the Olympic qualifying time is 27:28, therefore Smith needs to knock 1.28 seconds per lap of the track to hit the mark.

Whilst it is still considered a big chunk to knock off at that level, Smith’s progress appears to be rapidly improving, and in a race environment, who knows what he could be capable of. Smith qualified for the World Half Marathon Championships in Poland at the Big Half earlier this year, clocking 62:00 and breaking the British U23 half marathon record.

3rd place at Big Half, 2nd Brit in a new pb time of 62:00. Never thought I’d be standing on a podium with these two 📸 @hamudphotos @jrhodesathletics @officialbighalf

Due to the pandemic, the World Half was postponed to October, therefore Smith has plenty of time to get himself in PB shape for his senior GB debut. I asked him about his future goals and whether he is aiming for Olympic qualification after the World Half;

“In terms of goals moving forwards, I have the World Half Marathon Champs in October and I really do want to run a quick time there.I really want to run a quick 5km and after this half marathon I am thinking of coming down distances and giving myself a shot at anywhere from 3000m-10,000m.

Seeing that qualification standard (Olympic) has really motivated me and after the half marathon I am thinking of focusing more on the 10k. I will sit down with my coach James Thie and discuss the best possible training needed to run that time.

I don’t think I would be where I am today without his guidance. He made a joke after the time trial saying all you need to do is run 1.28 seconds quicker each lap, so I guess I have to try that.”

There are some exciting times ahead of Jake, but to make us all feel better, he did say he struggled to walk the next day!