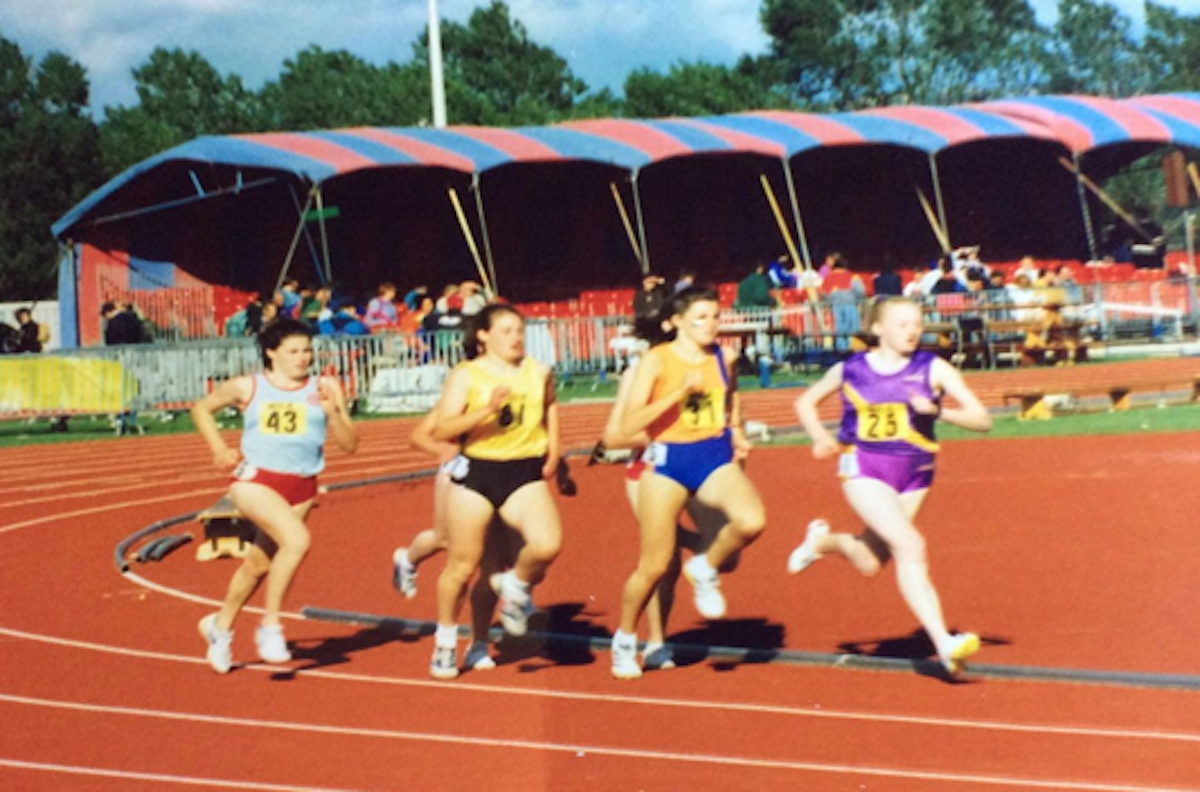 “It never entered my head that I’d make it as a senior”: 2002 Commonwealth Games Bronze Medallist Helen Clitheroe tells Lewis Moses & Matt Long about how she made the transition from event group middle distance athlete to event specialist 1500m runner

In first of our three part series, the 2011 European indoor 3000m champion recalled her career as a world class performance athlete, who appeared in two Olympic Games. In this piece Helen regresses down the long- term athlete development pyramid to recall the transition from middle distance athlete, to knowing that her event specialism would become the metric mile.

It’s the summer of 1997- The nation has just been told that ‘Things Can Only Get Better’ under new Prime Minister Tony Blair; Blur and Oasis are riding high in the charts and Steven Spielberg’s The Lost World: Jurassic Park is on at your local cinema. Meanwhile on 7th August in Swindon, a 23 year old disconsolate young woman sporting a Preston Harriers vest trudges off a track having yet again failed in her target to break 4m20s for 1500m for the umpteenth time that track season.

“It’s fair to say I wasn’t amazing as a youngster”, Helen says with candour. “I tended to run 800s in my early to mid teens and whilst I qualified for a couple of English Schools championships, I never made a final”. ‘So why not an early attraction to the 1500m’ we ask? With major championships gold and bronze sat on her mantelpiece its easy for her to laugh about some “real bad experiences” in that aforementioned summer of ’97 as she recalls how the proverbial Chimp on her shoulder nagged at her, “You can’t do them, they are too long!”

A year is a long time in athletics and when a tearful Helen trudged off that Swindon track having failed to go sub 4m20s yet again, never in her wildest dreams could she have imagined that thirteen months later she would place 9th at the Kuala Lumpur Commonwealth Games, clocking 4m12.61s in the process. If that Team England selection and major championship final would be enough to shake off the creature made famous in the Steve Peter’s bestselling book, it’s the psychological side of her development as well as the physiological which is equally worthy of assessment.

Helens’ acknowledgement that. “It never entered my head that I’d make it as a senior,” is more than just a nod to her tendency to self-deprecation. Rather it is a sign that she was immersed in healthy home and athletic environments where ‘significant others’ like parents and coaches did not put performative pressure on her.

Unlike, for example, the famous example of Peter Coe who would tell his teenage son Sebastian in the early 1970s that he better get used to the idea of being on a plane for the 1980 Moscow Olympics, Helen distinctively recalls, “Nobody ever said to me, ‘If you train hard you will be good enough to run in the Olympics in Sydney’ in 2000”.

Thanks to the intervention of a couple of affectionately recalled schoolteachers, one of whom was Frank Green, in her small village, Helen was able to enjoy lunchtime cross country excursions and, “took part in loads of funs runs”. Once again early success was limited to 4th place in a town sports cross country race and she joined Preston Harriers aged 11, thanks to the intervention of Jeremy Harries as her first coach who she credits.

Helen continues further about her progress as a late developer, acknowledging that, “I certainly wasn’t living the angelic life that some fellow teenage athletes were!”. Whilst her diet was good due to the cooking of her beloved mother, she hit the town to party in her late teens but now in her late 40s, she has a different perspective on this. “I never felt like I’d missed out on anything. When I decided I really wanted to commit I just wasn’t bothered about going out partying anymore. I’d already done that and got it out of my system”.

These sentiments are compatible with the philosophy espoused by Terry Orlick and Carl Botterill in their timeless classic, Every Kid Can Win (1975), when they poignantly concluded that, “To win the game and lose the child is an unworthy sacrifice”.

It’s fair to say that Helen’s relaxed approach towards the sport would change over time, as former training partner Lewis Moses recalls. “She was the model professional. I first met Helen in Portugal on a training camp in 2006 and I was immediately inspired to better myself. I knew at that point that I was not doing enough to be the best that I could be. That being said, I felt like my relaxed and non-specialised approach to the sport in my teenage years was very similar to that of Helen’s and therefore I could learn a lot from her”.

Retention in our sport

Even during her proverbial ‘terrible teens’ the key is that Helen willingly retained herself in our sport. She asserts that, “I never stepped away from running during my teens. I was probably rubbish but I still enjoyed turning up for training”. So, what is worthy of consideration is the distinction made by the psychologist Dr Michael Apter and consultant child psychiatrist Dr Kenneth Smith between ‘telic’ and ‘paratelic’ states of mind.

In their 1975 development of what became established in academia as ‘Reversal theory’, a ‘telic’ state of mind became associated with goal based motivation whereas a ‘paratelic’ disposition was indicative of simply engaging in a social practice simply because one enjoyed the process. Unlike trait based cognitive theories which tend to assume that personality and motivation are relatively fixed, as a state based philosophy, Reversal theory implicitly suggests human beings can be shifted between different states of mind.

Of course for Helen to medal in international competition as a senior would have required incredible goal based motivation and focus but conversely as a teenager this lack of telic focus and her embracing of simply enjoying the paratelic process helped retain her in the sport. Helen articulates that, “I just liked running basically- going to my club and competing in Mid Lancs cross country races”.

1. What kind of environment are we creating for the young athlete to take part in athletics and to enjoy the process rather than focus on the short-term outcome?
2. How are we coaching or guiding the teenage person and not just the teenage athlete?
3. In what ways are we facilitating long term retention in our sport for a teenager who may ultimately go on to become a recreational runner and perhaps volunteer in our sport much later in life?

Helen’s interview formed part of a presentation at last December’s England Athletics International Youth Conference, organised by Scott Grace as National Technical Lead for Coaching Resources and Youth Development. Article 3 will explore how Helen developed her Foundational and Fundamental skills as an athlete.

Lewis Moses is a former World Championship athlete and British indoor 1500m champion and founder of New Levels Coaching. He has tutored and mentored a host of Team GB junior athletes. As a former winner of the British Milers’ Club Horwill Award for outstanding Coach Education Research, Matt Long has authored more than 270 coaching articles. Both welcome contact for coaching guidance at mattlongcoach@gmail.com and through newlevelscoaching.co.uk

The FR virtual race calendar
A little bit of everything