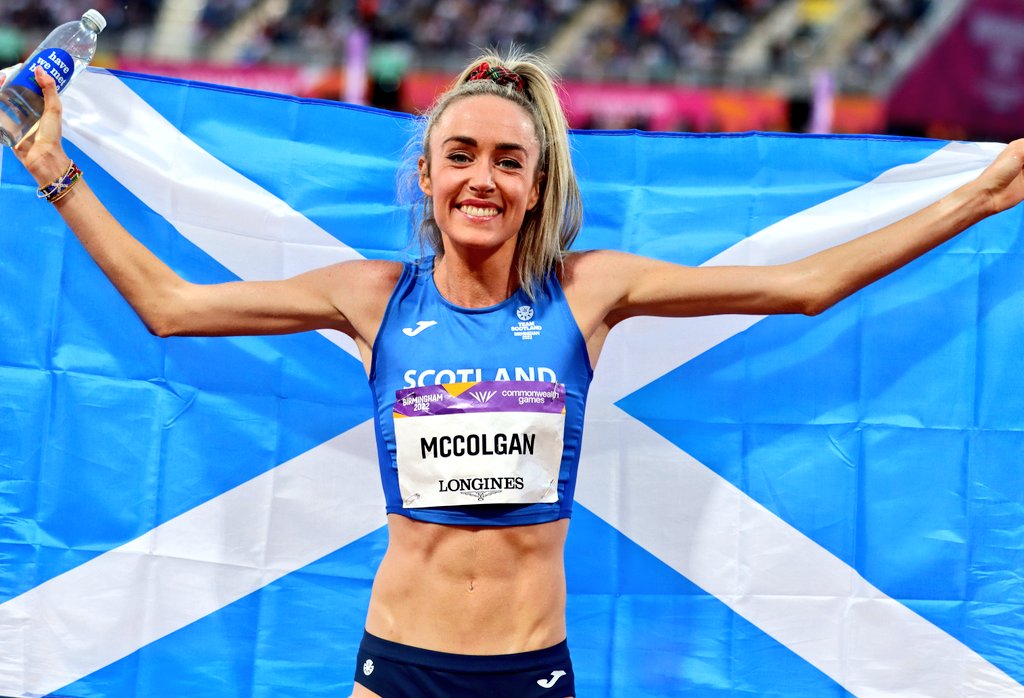 As the bell rings to signal the last of the 25 laps in the Commonwealth Games 10,000m final, the crowd rises to its collective feet in anticipation of the ensuing monumental battle which has become the proverbial ‘two horse race.’

With 300m to go the BBCs Steve Cram shouts that, “Its Kenya against Scotland. This is going to be a long run for home”.

200m to go and Cram cannot contain his excitement as he adds, “Eilish McColgan has the whole crowd on her side. Everybody wishing her, hoping she can do it”.

With the Scottish flag draped on back, McColgan races over to the crowd to embraces her mother. As she does so a fellow Scot, who is clearly a casual fan rather than an enthusiast sat next to me in the stands says in my ear, “I get her mixed up with Liz. How do you spell her name?”.

The comment makes me laugh as he’s already cracked open a beer in celebration and as I recount the story to my fellow coaches a day or two later I reflect that perhaps it is worth spelling out just what Eilish spells out. The following acronym is more than a name- it’s a set of six guiding principles which have informed the career of the 31 year old. In an interview with John Shepherd back in 2019, Eilish spoke about how she works off a training microcycle which deliberately exceeds the traditional 7 day week, pointing out that, “I now work off a longer weekly cycle and don’t stick to the typical Tuesday, Thursday, Saturday training days.

We have spaced things out a lot more and it seems to be working”. I liken this process to comparing the difference between eating off the kind of paper plate one is handed in the queue of a buffet to eating off a conventional piece of cutlery- the 7 day microcycle representing the paper plate where food is crammed on and piled up, whereas the conventional much larger plate allowing for one’s meat a vegetables of the training diet being spread out a little more thus reducing the danger of things falling off.

Interrelated to the extension of microcycle is the Dundee Hawkhill athlete’s desire to avoid the kind of injuries which threatened her career in previous years. Aqua jogging, spin biking and the cross trainer have all been used in replacement of double day running to help with mechanical loading (Shepherd, 2019).

Running is a late specialisation sport where those who excel in the junior ranks are often sadly lost to our sport because of a misguided focus on results rather than the process of enjoying the sport (see Long, 2022).

The 2018 European 5000m bronze medallist has said, “I’ll always remember my mum saying “focus on you” because some of these kids will be training too hard for their age and not make it into the senior ranks. Looking back now she was spot on. Everyone develops at different rates, so just because you’re not a successful junior doesn’t mean you can’t do it as a senior. I was 21 when I made my first ever GB team” (Shepherd, 2019).

Include all event groups

The woman who placed 10th in last month’s World Championships in Oregon clearly has invested in developing her fundamental and foundational athletic skills. The latter involve a commitment to running, jumping and throwing to continue to develop agility, balance and co-ordination. She has said, “I did everything at the club and actually started off in the high jump and javelin”, laughing that, “my first Scottish youth medal was in the javelin!” (Shepherd, 2019). Significantly she was still high jumping as an U17 athlete in the Scottish Young Athletes League.

It’s significant that the Commonwealth 10,000 champion did not race 25 laps of the track until she was almost 27 years of age, recording 32m10s at the Stanford Invitational meeting in March 2017.

Her working of the 800m and 1500m for years before moving up to the 5000m and 10,000m and using the 3000m as a ‘bridging’ distance along the way is indicative of an athlete who has developed ‘speed windows’ plus the requisite speed endurance along the way to equip her for a 63s last lap run in Birmingham.

Oregon based Peter Thompson (2009) has done great work on understanding the continuum of body types in athletic terms and significantly some may have mistaken McColgan’s ectomorphic frame as a sign of a lack of strength.

This is patently not true considering her early commitment to cross country running in order to develop strength endurance in her formative years. Without ever excelling, ‘Hare and Hounds’ style cross country was clearly used in processual terms with outings over the Great Edinburgh international, UK Challenge Series and Scottish Universities championships being evident.

So Eilish the name and E.I.L.I.S.H the acronym leaves us with the following questions for self-reflection:

1. What might be the benefits of extending my training microcycle?
2. How can I best effect injury avoidance?
3. Why might late specialisation benefit my athletic development?
4. Why is it important I include modes of jumping and throwing as well as running in my training?
5. Where am I making the lost of my windows of opportunity for the development of speed?
6. When can I utilise cross country to develop physical robustness and strength endurance?

Matt Long was an England Team Coach at the Birmingham 2022 Commonwealth Games Development Camp and welcomes contact for coaching support through mattlongcoach@gmail.com