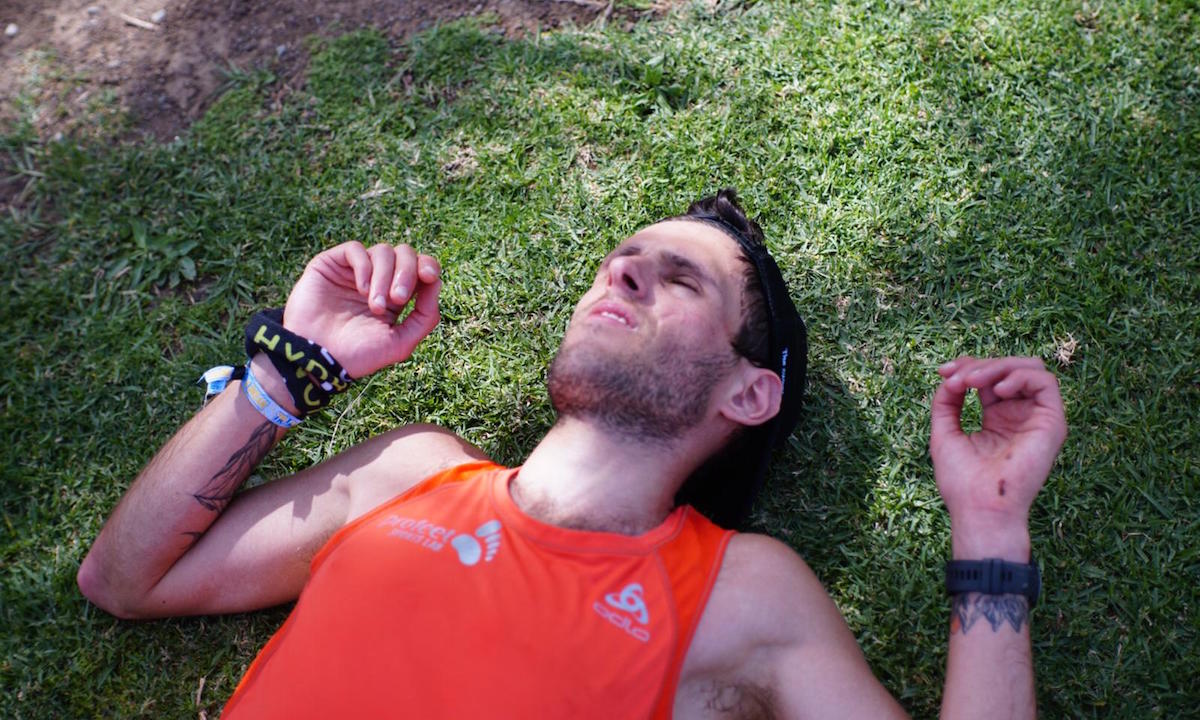 The toughest race in the world isn’t the Marathon des Sables, it’s probably much shorter than that and with a whole lot less sand.

After recently enjoying the suffering of the Armagh International 5k race a few people mentioned it must have been easy as you’re used to running much further. After all, it was only 15:27 of running,  compared to 24 hours, my “favourite” discipline of ultra running.

There’s an assumption, certainly in the running media, that ultra marathoning is only for the masochistic, that we’re super tough and ultra runners are just loads tougher than the shorter distance runners. This simply isn’t true.

Newsflash: running 5k hurts, really hurts. If it’s not a physically and mentally challenging experience then you’re not trying hard enough. You might even suggest that if an ultra feels harder than a 5k then you’re probably pacing both badly.

The first 80 miles are easy

This is one of the quotes a friend made into a business card for me many years ago, but it still rings true. If you’re running 100 miles then at least the first 80 miles should be done at an easy effort. Yes, it will start to feel harder, become uncomfortable and you might have some blisters, but you shouldn’t be working hard. It’s just not sustainable for the time frame you need it.

So how much should a 5k hurt? In preparing for Armagh I went and did Huddersfield parkrun on Christmas Day and I’m glad I did. There was an almighty shock for me as a present that day. It hurt. About three kilometres in, all of a sudden, I was reminded just how hard running a 5k is.

Until about three kilometres I was running fast, breathing hard, mentally struggling to keep up with the two chaps ahead. Then boom. It was hurting more than I had done in an ultra. I was still catching the two runners ahead, I would briefly take the lead (although no one truly leads a parkrun) on the last bend, but then have one runner come past again before the finish.

The same at Armagh. About 2.5-3km it goes from feeling “easy” to run the pace needed to becoming a lot harder. Whether this is down to the level of competition and one’s perception of effort, just a build up of waste products in the body or both and another multitude of factors it felt harder than ultra running.

Stopping for a cup of tea

When the going gets tough in an ultra you can stop, have some food or splash your face with water and then continue at a world record pace. Having a pee or eating a sandwich are actually necessary to run your best, whereas a cup of tea at halfway would totally destroy your 5k PB attempt.

The margin for error is much smaller with any distance below 50km. The marathon in Valencia came down to about 30 seconds to achieve my goal. Each of the final six miles really did hurt, but none hurt like a 5k or shorter race. It was more a battle with the mind than the body.

That narrow margin for error seems to heighten every little aspect, but also increases the pressure we place on ourselves. That pressure can make everything feel harder too.

The frequency one can race shorter distances events might actually help reduce that pressure a wee bit too. The fact that the pain of a 5k might be lessened in our heads just because we know you can go all out again in a short while’s time.

That’s not to say an ultra cannot hurt. Oh my, they can be painful. But it’s more like a thousand pinpricks, with each step in the second half being another little additional cumulative pain, than the large twat around the head that each minute of a 5k can feel like. The marathon is somewhere in between.

The coping techniques we use can still be very similar and there is a benefit for having some variety in your racing.

We’re all familiar with self talk, telling ourselves we can keep going, drive through the pain. Willing the body to give one last big push and reminding ourselves that “you can do this”. It’s a technique that works well for all distances, but as I wrote about recently, the conversation can be a lot shorter and louder for the shorter distances, whilst in an ultra it is more of a prolonged debate.

Breaking the challenge down works too. An ultra runner might try to get to the next checkpoint 10 kilometres away, whilst a 5k runner is just aiming for the next lamppost 100 metres away, before renegotiating with a suffering pair of legs.

If you can convince your body to push through the pain of a shorter distance, then it becomes easier to make the legs play ball in a marathon or ultra too. It’s like lifting bigger weights for the mind.

I’m not sure it works brilliantly the other way round though. Telling yourself that it’s “only 5k to go in a marathon” still seems shit, although it might be a little less so if you’re used to suffering for hours on end in a 100 miler. The continuous pushing of shorter distances makes it a tougher ordeal, there is just no respite in the motivational battle.

Putting it in practice

Even this weekend past, running a trail marathon in the heat in Gran Canaria there were moments where it was only 10km to go, but knowing I could run 100 miles didn’t really make me feel any better. Crewing my friend in the bigger race when he “only had a marathon left” didn’t make him feel like it was a final push.

It’s easier to make yourself run ultra marathon pace when it hurts than it is to run 5k pace. That’s a given. Yet in the last few kilometres I was reduced to a walk for no reason other than lacking the mental drive to keep going. I thought about Armagh and how hard I had pushed then.

At Armagh it was eight or nine minutes of pushing, albeit at a much harder level, but at TransGranCanaria it felt harder to bring myself to run a sub 10 minute mile, rather than the sub five minute miles a week before.

The pain was a whole lot less, but the motivation was certainly harder. The trail marathon was hot, rocky and I had taken a nice roly-poly down one of the hills too, but it wasn’t the pain stopping me going faster. Running too hot, empty on energy, but most importantly, empty on motivation brought me to an amble.

Will that help me in my next 5k? I wouldn’t think so. In the same way does running a 10k help an 800m runner push harder on their next double lap? It’s a totally different type of pain and I think it only really works one work and that is up.

Physiologically the combination of anaerobic and aerobic work required for a true maximum effort at 800m is the hardest thing any runner can do. My friend Andy Kett once told me his biggest dread came in the final 100m as the pain after finishing was the worst.

Until the aftermath of finishing fills you with fear, you’re not racing the hardest distance. Ultra running is easy, marathon is tough, 5k is painful but 800m running scares me away from the start line…. maybe in the summer.

RELATED: The highs and lows of a sub 2:30 marathon

Should you always be happy to run a PB?
Cut short: IAAF revamp leaves distance running fans in the cold