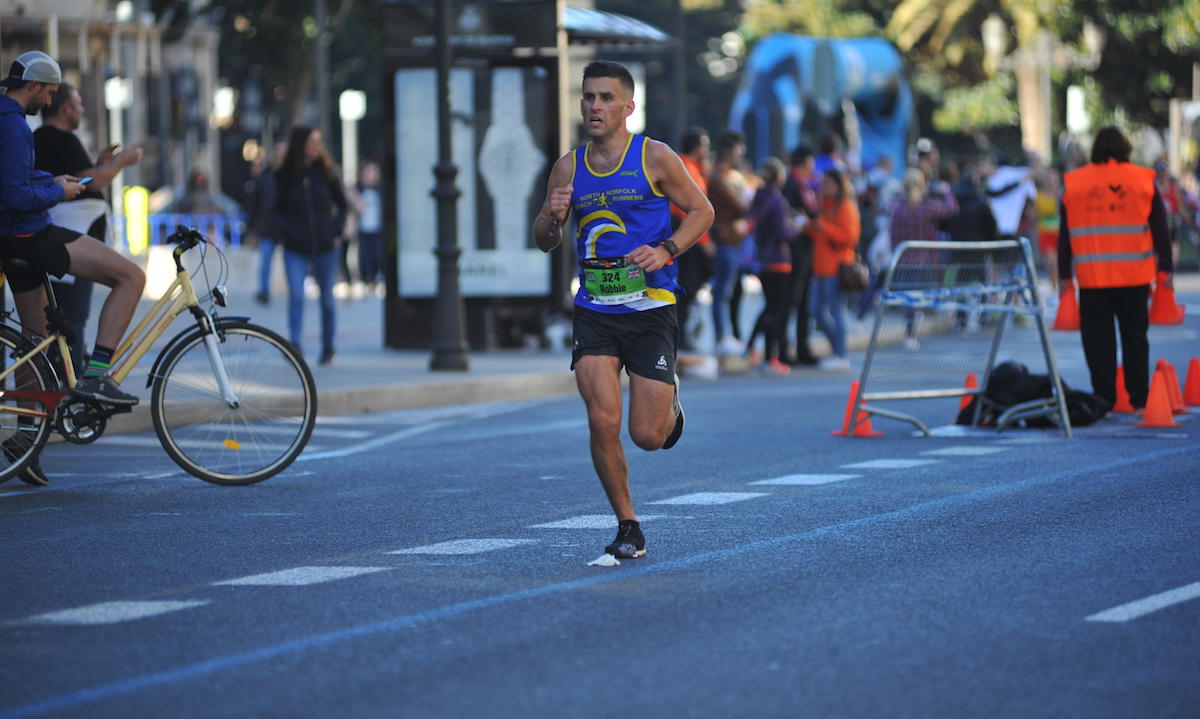 In the marathon you don’t get what you want, you get what you deserve. A few days on Robbie Britton reflects on chasing sub 2:30 at Valencia marathon and how he nearly blew it all in the first 5k.

One of the things most enjoyable about marathon training is how quantifiable it is. Run this pace then you can run this time. Hit this session and then you should be confident of getting XYZ. Travelling to Valencia last week I was confident, possibly a little too confident.

The biggest fear I had going to Spain for my marathon wasn’t not running under two and a half hours, it was not fulfilling my potential on the day. What if I had a 2:26 in me and I didn’t even try? If I paced the first half too slowly then I might finish with loads in the tank and then have to do another marathon!

The hard work of months past had made me feel like I deserved a good marathon time. This confidence is a valuable commodity in road running, but it can also be your undoing. I’m one of those people who dreams when they’re awake, but it’s easy to get carried away.

How to blow your chances in the first 5k of a race.

Having not run a proper big city marathon, unless you count Edinburgh in 2009, the pace and excitement at the start was always going to be an unknown. Coach Tom Craggs sounded nervous the night before that I would start too fast, but I felt good and confident I could show restraint.

Fast forward to the gun. Pop. It was a little underwhelming in terms of firepower, but we were off. Over the iconic bridge start of Valencia maratón and the first mile clicked through in 5:32. A little bit quick but we’d slow down for the second mile.

Don’t over-rely on the data

Here’s where over reliance on data can be an issue. My HR for the first mile was reading over 200 so I knew it was off, but by the time it had settled back to a correct reading, I was well in mile two and working a bit too hard. Not much, only four or five beats per minute too hard, but hard enough. Getting used to the pace you should start a marathon is certainly part of the race craft you start over time and it’s a lot easier to mess up than at an ultra. At an ultra you just start easy.

Mile two popped up as 5:20…. Sat in with a group I felt like I was floating along (tapered legs can trick you) and I just thought it was a mistake from the watch. Maybe it had cut the corner off or something as this did not feel like a 5:20 at all! How wrong I was.

Reflecting back, that first five kilometres in 17:09 was probably a LITTLE too quick. Definitely too quick. You get what you deserve in the marathon but that’s not just down to training, it’s down to how you pace the first half, ow well you eat and drink and how well you taper. My flying start meant I now deserved a painful second half.

How hard should it feel?

The problem with not racing many road marathons is you just don’t know how hard it is supposed to feel. I didn’t mind dropping back from the group around 10 miles in as I knew they were quicker than me. I was trying to keep the HR down, but it just kept creeping up.

Around 10-11 miles I went over 180 and could not get it back down. By 15 miles it was 185. That’s 95% of my max HR. By this point I knew that if I wanted to run a good race I needed to ignore the HR as whatever it said wouldn’t help. I knew I started too fast and a watch reminding me was of no use, but merely to dampen spirits. Not once more did I look at the HR for the entire race. I just went as fast as I could.

My fuelling plan involved grabbing a bottle from Nats at around halfway (I was clearly the ultra runner in the pack with a handheld bottle attached from the start) but I dropped the lid and with it all the Maurten energy drink I had planned on. There was no use in being worried about that, it was wasted energy, so I took on my back up gels and grabbed water and gels from the supporters. The organisation was fantastic with bands and music almost the whole way round too. The photos of the race around miles 18-24 show a real concern on my face. The question of whether I had blown it was heavy in my mind. Miles of 5:56 & 5:54 can quickly eat into your time if you’re aiming for a goal of 5:43 per mile. Losing over 10 seconds a mile means you drop a minute over that 10k. It was a time for damage limitation and people started to pass me.

Yet focusing on negatives like being passed can only damage your chances. There were others ahead hurting more so I focused on them and slowly chased them down. At 35km the time prediction from the Valencia app had me at bang on 2:30 (+- 7 seconds). For those watching it was apparently a little nerve wracking.

Even though everything was hurting I knew I still had something to give. Every distance marker became a maths problem. How much would I have to risk in those last two kilometres? I would have rather keeled over trying in those last few kilometres than miss my target after all that bloody blogging in the build up! The idea of writing a 2:30:01 blog actually did help me push harder.

It felt like it was either going to be sub 2:30 or bust. I was either going to make it or have to crawl those last few hundred yards so hitting 800m to go with three minutes lifted a little weight. When I got to 300m it was just one lap of the Chamonix track to go, it was possible!

2:29:31 was a whole lot closer than I had planned, but it was sub 2:30. I was overjoyed. The months of hard work and dedication had paid off, even if I’d done my best to sabotage it in the first half. Thanks to everyone for following and joining in the journey. It really did help during training and on the day. The help of my wife Nats has been invaluable and I love her for indulging my pipe dream of training for a sub 2:30 marathon in Chamonix. My coach Tom Craggs did a fine job too and I apologise for scaring you with the fast start!

Many have asked what the next challenge is? Well, next I’m crewing friends over 24hr races in Phoenix, Arizona and Barcelona and then it’s going to dump with snow at home (hopefully). Cross country skiing and ski mountaineering will be the norm to give the legs a rest.

There are several shorter distance running goals I still want. The sub 70 half, the sub 15 5k and even a sub nine minute 3000m I will try in time. Maybe even go for the sub 2:25 in future. Trying to dip under 15 minutes at Armagh 5k International in February and writing about the journey might be the next one though. For now it’s a week of rest and maybe some cycling.

As promised I gave it my all. What more can you do on the day?