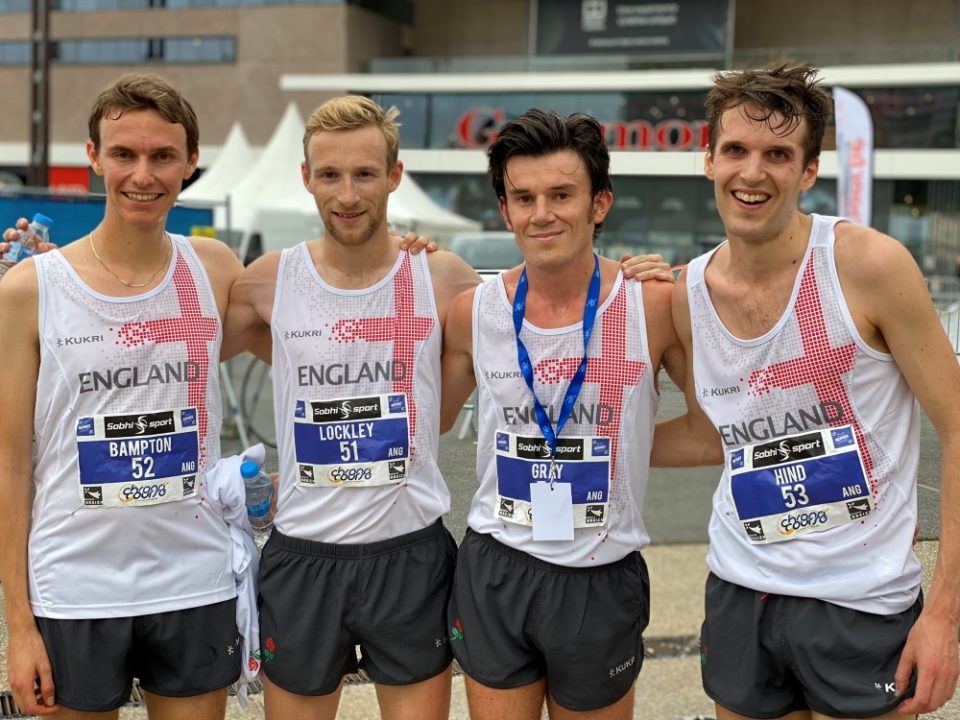 I have had the privilege of training with a number of successful clubs throughout my running career. Additionally, by the medium of Strava, I’ve also followed the training and progress of a much wider circle of athletes up and down the country.

In this time, I’ve made an observation surrounding the training of many good, club-level athletes and only recently have I begun to act on it to my advantage. The observation is this….good club-level endurance athletes (at least in the UK) train VERY similarly;

We are good at smashing sessions.
Most often Tuesdays (shorter reps) and Saturdays (longer reps) or sometimes Wednesdays and Saturdays. Many opt for an additional tempo-like session on Thursday or Monday for each arrangement respectively. In my experience, athletes are very good at burying themselves in these types of group sessions all year round.

We switch to speed work and drop to lower mileage around May time.
In preparation for dropping down to 3000 – 10,000m track racing.

We easy run at very similar paces.
Typically 7-7.30 minute miling although some athletes will regularly run quicker than this.

We reserve Fridays for resting or our easiest run of the week.
Actually the whole week structure is very similar between different athletes but Fridays seem particularly sacred for rest days / very easy running.

We long run similar distances on Sundays.
Typically 1h 30 – 1h 45 at easy pace although again there is some variation on this even amongst non-marathon runners, many opting for a ‘steadier’ pace closer to 6 min miling.

We begin to double at a similar threshold of mileage (on similar days).
Over about 60 miles per week athletes tend to start doubling. Typically these are done on midweek session days. Much above ~75 miles additional doubles are often introduced.

There are many good reasons for individuals to stick to the largely universal training formula I’m about to dissect. I would even go as far to say that this training formula is possibly one of the best-advised formula for clubs to advocate to amateur athletes at a group-level.

What I mean by that, is that if you have (hypothetically) 100 athletes and you have to suggest a universal training schedule for them ALL to follow – then maybe this status quo training regime may well succeed in benefitting the highest proportion of them versus alternative strategies. After all, many fast athletes from very strong clubs have enjoyed a lot of success in following subtle variations of this formula.

Therefore this is absolutely not a criticism of any clubs who adopt similar training strategies when catering for large number of athletes. On the contrary, I believe it is the athletes’ responsibility to start taking ownership of their training by modifying pre-existing club training set-ups according to their individual needs.

My argument is this – any universal training programme is not going to benefit everyone equally – regardless of how successful it is at the group-level. There is simply too much heterogeneity between different athletes’ physiology, psychology and work/social lives for this to be the case. A universal programme is very unlikely to be optimal for any particular individual athlete.

We therefore have a situation whereby many athletes may be benefitting from a training routine the majority of their club mates follow. However, at best many are still not training optimally or at worst aren’t benefitting at all; instead getting continually fatigued, injured or ill due to their club-plan being at odds with numerous aspects of their life. I fell into the latter category until January last year, achieving marginal, unpredictable gains despite maximum effort at the cost of frequent illnesses.

I argue that gains can be made, at least in a subset of athletes, by exploring different training strategies that are more personalised to their racing goals, work-socio-life balances and particular athlete needs (we don’t always respond equally to the same training stimuli).

I could provide a whole load of detail on each routinely incorporated item on my aforementioned list that I believe should be challenged or at least justified from time to time. However, for the sake of space and succinctness I’ll provide detail on only one component with just a few lines for the remainder. The art of hammering sessions.

Case study: Smashing sessions – the good, the (potential) bad and the personalised.

The good: Putting yourself in the pain cave is an important part of training. Just like ‘going to failure’ in weight-lifting regimes, smashing sessions by running to the limit provides the maximum amount of stress/stimulus to your body in order to gain the maximal amount of training adaptation.

Psychologically, it is also important to develop that pain-tolerance come race day when you really do need to empty the tank. As for the choice of days – its obviously important to lock down the same days of the week for sessions to facilitate big groups which push us to work harder. But do we need to be red-lining all year round?

The (potential) bad: Distance running isn’t like weight-lifting, to improve it’s not just as simple as being able to cope with increasing amount of weight each week with adequate recovery time in between.

It’s also about developing the aerobic engine with those mid-week sessions and long runs, it’s about putting in those threshold runs and, more holistically, it’s about putting it altogether into a sustainable weekly structure that can promote consistency over a period of months.

Red-lining in sessions week-in-week-out can potentially jeopardise both these factors. On one hand it may leave us too fatigued and sore to implement the other training ingredients (i.e. the long easy miles and the tempos) effectively. On the other, we increase our risk of niggles and infection because we are constantly throwing ourselves into full-scale recovery twice a week which can put paid to any consistency.

My personalised alternative: The majority of the year I train at 80-90% in sessions. I get a lot of the session’s intended benefit and subsequent adaptation with minimum fatigue allowing me to string together largely uninterrupted blocks of training prior to a racing period. I don’t judge my progress on comparing absolute rep times.

Compared to a previous session, running similar rep times at a lower perceived effort (or heart rate) or with additional reps, shorter recoveries or even off the back of a higher volume training week are all alternative metrics I use for confirming progress which doesn’t rely on increasing intensity alone.

Around 2-4 weeks out from a target race I wring the towel on my training and get back towards 100% effort. I’m able to do this far more easily, because I’ve gotten myself very fit with a good block of consistent training – it’s a self-reinforcing cycle.

During this more intense ‘crunch time’ training period I allow myself an extra day recovery opting to train on Fridays instead of Thursdays. For a marathon crunch block I’ll maximise my recovery time even further by training hard only on Sunday and Wednesday. Shifting my week around like this does make for some lonely sessions but I’m often stronger and tougher as a result.

A four second video to illustrate what it means to have just clocked 2.21 at Frankfurt marathon. Over the 🌑.

HM negative splits: 71:27 / 70:27 so couldn’t ask for much better than that! #sub22 #frankfurtmarathon #runtheskyline pic.twitter.com/KIgtcUxsrY

Challenge the rest of your training plan

There are many more things which we should try to be more flexible about from time to time. Here’s just a short-list of some of the other fairly universally incorporated training items I’ve challenged with a few accompanying lines for why each component may not be optimum for everyone and how I’ve personalised it to my own needs.

We switch to speed work and drop to lower weekly volume around May time.

I refer you to Will Mycroft’s elegantly written, statistically supported FastRunning article exploring why UK athletes race faster on the road than the track. Is there something special about Armagh and Ipswich 5k or are we just fitter in Spring before we dramatically drop our volume and switch to speed work?

It’s been known for a long time that Kenyans are content jogging 9+ minute miling on easy days. Dropping slower than 8 min/mi (occasionally 9+) on recovery days, whilst more boring and marginally more time consuming, really freshens up my legs on recovery days which is the point after all!

We reserve Fridays for resting or our easiest run of the week.

I think the reasoning for this one is as much psychological as it is traditional. It’s the end of a long tiring week and seems the best time to relax or at least run a bit less. Although again, not everyone is the same – for a start not everyone works Monday – Friday and, even for those that do may not actually be at their most physically fatigued on Fridays.

I’m a night owl. My sleep pattern is hit hardest on Monday after a weekend of sleeping a little longer, then there’s a few days of mild sleep deprivation before my circadian rhythm catches up with itself again and by Thursday/Friday I’m more or less synchronised. Hence, I actually prefer to backload my week with longer runs or sessions Thursday / Friday following my lightest day of the week (Wednesday) after a Tuesday night session (which itself disrupts sleep).

Many athletes who step up to the marathon report that they smash their half, 10k (and sometimes even 5k) PBs along the way; often regardless of how they actually perform in the marathon itself. One reason for this may be the additional aerobic gains made from stepping up those long runs. I decided to make 2 hours my staple long run most of the year round and feel it’s a strong component in keeping me strong in the latter stages of any endurance races.

We begin to double at a similar threshold of mileage (on similar days).

Doubles can allow us to increase our overall weeks’ mileage whilst maintaining a reduced risk of injury. Many athletes also like to warm up their legs earlier in the day on session days. However, once again this may not be the most optimal strategy for all athletes wanting to maximise their aerobic gains.

I pretty much abandoned doubling nearly 2 years ago. Firstly, I’m terrible first thing in the morning so much prefer to opt for a little more sleep before work. Secondly, I have found I have gotten very fit by running ~ 70-85 miles per week in singles without feeling excessively fatigued. Maybe I’ll double as my average weekly volume continues to creep upwards, but there’s no hard and fast threshold for when that should be.

Of course, I don’t advise altering all these components at once. These are just some ideas for how an athlete might start to think about personalising their training regimes a bit more to match both their personal circumstances and racing plans over the course of the season.

We tend to associate improvement with more intense training and/or increased mileage. In this article I hope I’ve formulated an argument for a third source of improvement – that of being more efficient with the amount of fast running we are already doing.

You can check out Alex’s blog for more of this thoughts on training and racing and keep an eye on FastRunning for more from the Highgate ace.