Just a run in the park 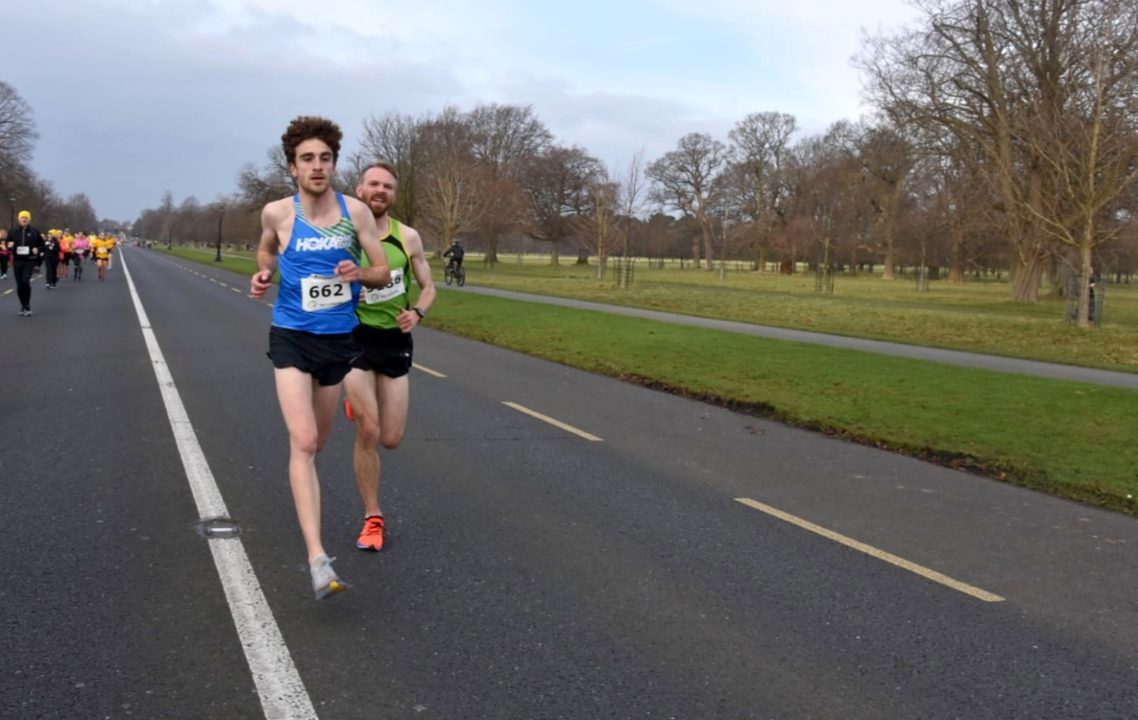 Pierre Murchan of the Dublin City Harriers last week ran his first ever marathon, on the well travelled one kilometre grass loop at the Polo Grounds in the Phoenix Park.

His longest run before this was a 20mile run in the hills of Glendalough, back in 2017. So Bláithín Sheil thought Fast Running should have a chat with the young Irish international.

“I saw there were people who had done a half-marathon on their balcony, and a 50km around their garden, and I wanted to do something like that. I felt like the Polo Grounds was the right place.” The Polo Grounds is a well-established training spot.

For the NUI Galway athlete, the motivation to complete this challenge came from within “it was more like a personal thing, I do loads of sessions by myself around a hockey or a football pitch anyway and I kind of enjoy those. It gives you a lot of confidence too, knowing that you can just stick to it, do it yourself.”

Does he draw confidence from that in races? “Yeah for sure, and in sessions, it means you know you can keep going. I didn’t really think I was actually going to do it, even halfway through I still didn’t think I would go the whole way.”

Murchan, who qualified for the World Juniors in 2016, saw his fuel planned scuppered early on in the attempt. “I had brought a packet of jaffa cakes with me and I left them in my open bag so I’d be able to get them easily. After the first lap a crow had spotted them, and by the end of the second lap he had stolen them out of my bag. By the end of the fourth lap, him and all his mates devoured all of my jaffa cakes and they were all gone. It was a terrible start.”

But with at least 38 laps to go, he wasn’t deterred “to be honest I just kept going. I had water and two bananas, and a carb drink still. I stopped looking at my watch after about 8 miles and I don’t think I looked at it again until about 22. I just kept telling myself it was easier this way.” This is probably how Murchon felt when the crow took his biscuits (it’s actually from World Juniors). Photo: Provided by athlete.

One of Murchan’s proudest achievements, apart from his numerous Irish caps including the European under 23 Championships in Gavle, 2019 where he competed in the 5000m, is his 14’36 5km time that he posted hungover on New Year’s Day. He clearly has an ability to grind through tough things.

Getting in the zone

“I wasn’t really thinking much, I had planned to use earphones but I didn’t use them in the end. I had also planned to change direction but I didn’t in the end either. I was going to have to run the same distance either way.”

Afterwards, he was eager to get home ASAP to eat seeing as his jaffa cakes were stolen. He arrived home to a nice surprise, his girlfriend had sent a Thai takeaway to be delivered to his house which arrived just after his shower, “that was pretty nice.” Luckily he didn’t suffer too much due to the robbery as he started the run with a full stomach.

Murchan is on the Hoka One One Racer Programme, which is for people who race often around their other life commitments. It is a brand ambassador role. He might do the marathon again while the Irish people are confined to a 2km radius of our homes, but he is also considering an attack on other strava segments.

“I’ll probably do the Great Ireland Run course in the [Phoenix] Park at some point, try to go for the Strava segment record, and to have a goal to aim for.”

Strava plans for the future

There is also a 5km segment up the Hill of Howth. The record is held by Sean Tobin of Clonmel AC and the Dublin Track Club, and Andrew Coscoran of the same training group recently said he might give it a stab.

They will all have to wait until the 2km radius limit is lifted, but it’s a good way to keep motivated when everything else is cancelled. Murchan notes that “it’s not a bad idea to be honest, but I might put it out to the public and let other people decide what I am going to do next to keep myself occupied.”

There is no doubt about it, people do mad things to keep sane during tough times. His college coach, Matt Lockett, just sent him a “load of fat laughing faces, and was like “you’re insane.”

Getting ready for the Irish 24hr team

After some pushing from FastRunning, which is edited by a 24 hour runner, he agreed to attempt a 24 hour run in the future “fine. I’ll go do 24 hours on the Polo Grounds, if people were there to help me.” That one might have to wait until social distancing is over.

Both the male and female Irish 24hr records have already been broken in 2020, with Aoife Mundow of Drogheda and District AC running 231.376km on a one kilometre loop in Athens and Ed McGroarty of Lifford Strabane AC running 249.626km around a sub 400m track indoors in Finland. So Murchan will have his work cut out.

In the meantime, he is calling out for other people to take on some challenges. “I was going to call people out in my strava caption, be like, who is next.”

“I have made a strava segment now for the Polo Grounds marathon, so there is one there if anyone wants to go take it. And then I’ll have to go do it a second time.”

The results of the inaugural BHAA Virtual 5k are now available in PDF. Well done to the 93 runners who took part over the week and hopefully we raised some vital funds for the Irish Cancer Society. You can still donate on their website.

Good to see so many of the regulars entering this virtual race and a particular mention for Kevin Cummins who romped home in first place in his age category. Long overdue prize * for him!

Manage the load
We need to trust the next generation