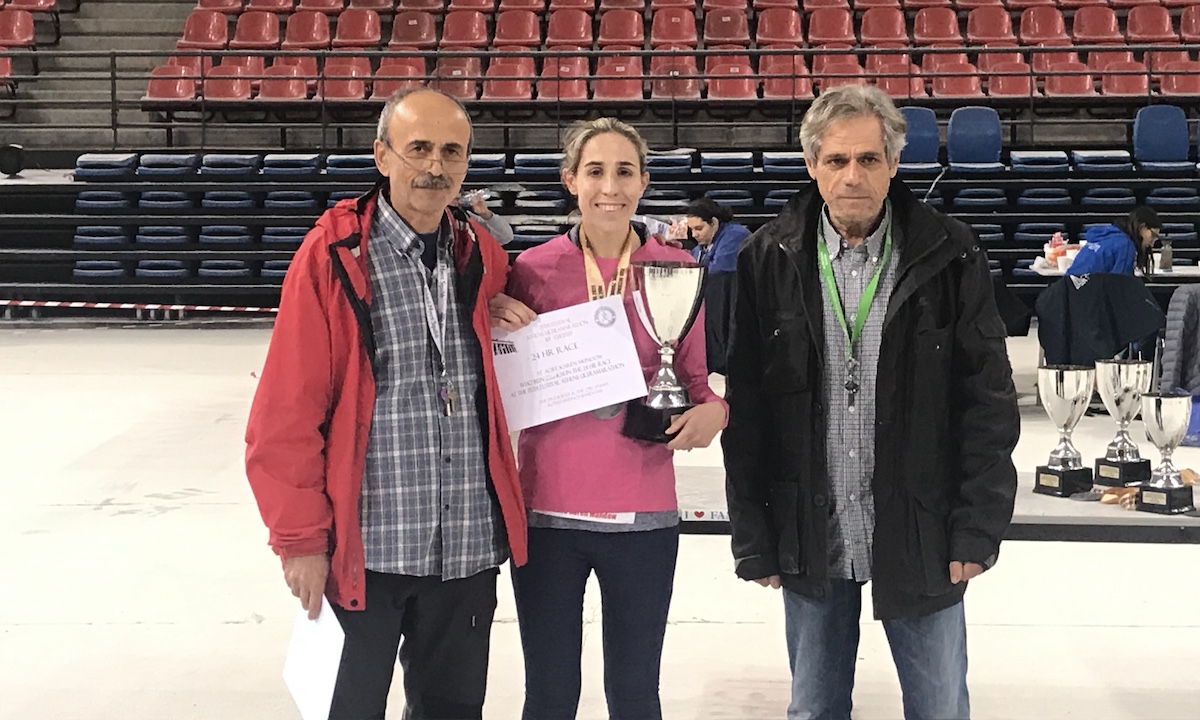 In a weekend focused on cross country for many, an excellent performance stands out from Athens, Greece an Irish international ultra-runner.

That distance improved on the distance of 229.347km run in 2012 by Ruthann Sheahan. Mundow finished fourth overall and first woman in the race and, along the way, also set new Irish 6-hour, 12-hour and 100 mile records. The Athens course is inside the old hockey stadium from the 2004 Olympics and includes a couple of tight 180 degree turns so it’s a strong performance to start a European Championships year.

Last summer, Mundow set a women’s record for the Wicklow Way of 16 hours 6 mins 30 secs, but maybe this year the focus will be the 2020 European Championships in Verona, Italy in September.

Dean Casey from Ennis Track Club in Co Clare, the Irish U18 champion, not only won the U20 men’s race at the Celtic International and Home International held in Stirling, Scotland on Saturday (January 11) but lead the Irish team to victory.

Ireland’s other winner was Claire Fagan who won the women’s U23 title, with the women’s team finishing runners-up behind host nation Scotland.

Patrick McNiff of Banbridge AC finished second in the U23 men’s race for Northern Ireland, with the Irish men, led by David McGlynn of Waterford AC in 5th place, finishing second. The Irish U20 women’s team finished third, with Northern Ireland fourth.

Flying home for the cross country

International mountain runner Eoin Flynn of Rathfarnham WSAF AC, who is based in the Canary Islands, was a surprise winner of the men’s master’s race at the Leinster Masters and Intermediate Cross-Country Championships in Gowran, Co Kilkenny on Sunday (January 12),

No easy going in January mud

First of the women masters was Karen Costello of Dunleer AC, with Karen Donnellan of Edenderry AC second and Michelle Cox of Newbridge AC third. Sli Cualann AC, led by Catherine O’Connor in fifth place, were first of the W35 teams, with Sportsworld AC second and Newbridge AC third. Mullingar Harriers were the winning W50 team, helped by Brigid McCabe who was first W65. Taking her first W50 category win was Emilia Dan of Dunboyne AC.

Padraig Moran of Mullingar Harriers was the winner of the men’s intermediate race ahead of his clubmate Andrew Nevin second and James Kelly of Castlecomer AC third. First team was Mullingar Harriers, followed by Raheny Shamrock and Tullamore Harriers.

Winning the women’s inter title was Irish international orienteer Niamh Corbett of Raheny Shamrock, who made the line with two seconds to spare over Emily Grennan of Tullamore Harriers. Sisters Kate and Breda McDonald of Ballyroan Abbeyleix and District finished third and fourth.

Turner for the win in Dublin

Conor Turner of the Gardai took a solid victory at the Bank of Ireland BHAA 6km cross-country held in gusting conditions at Tymon Park, Dublin on Saturday (January 11).

Sean Doran of Harrier Products was second and Kevin Donogher third. First woman was Niamh Allen who finished 14th overall. Niamh Devlin of the HSE was second and Laura Buckley third. In the team categories, Bank of Ireland made it a home win in grade A, beating HSE and KBC Bank. ESB won grade B, and Dublin City Council D with no C grade teams competing. Best of the women’s teams were the Teachers, followed by Revenue.

Eric Curran of Merck and Breeda Gaffney of Ellen’s Cakes led home over 400 finishers at the Dupont FMC BHAA 5km in Cork on a crisp Sunday morning(January 12).

Curran clocked a time of 15 mins 43 secs to finished ahead of Joe Cunningham of Eli Lilly who finished in 15.50 and was also first M45. Third was Ken Kelliher of Irish Distillers-Pernod Ricard in 16.19.

Kelleher was first woman in 18mins 15 with Jennifer Goggin Walsh of Novartis a close second in 18:20 and Carol Finn of Carol Finn Physical Therapy third in 18:29.

A closely run women’s 1500m proved the highlight of the National Indoor League in Abbotstown with Jodie McCann of Dublin City Harriers just getting the better of Rachel Gibson from North Down AC. McCann finished in 4:32.25 and Gibson in 4:32.37.

In the 800m, Cillian Kirwan of Raheny Shamrock ran a time of 1 min 55 secs to win the mens races, while first in the women’s race in 2:06.05 was Nadia Power of Dublin City Harriers.