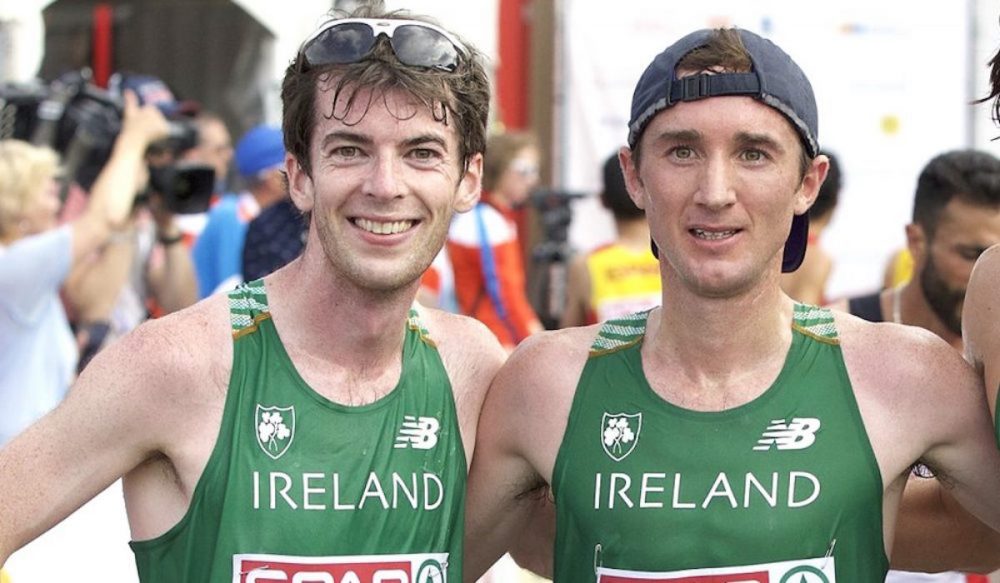 In a packed weekend of action we saw another Olympic marathon qualifying mark in Spain and an Irish 24hr record in Finland. Lindie Naughton reports.

Kevin Seaward of St Malachy’s AC moved into second place on the Irish all-time marathon list when he ran 2 hrs 10 mins 12 secs at the Seville Marathon on Sunday (February 23).

Although it was a personal best, Seaward’s time was only enough for 26th place in the race. Race winner Mekuant Gebre of Ethiopia ran a time of 2:04:46 with the top 14 finishing in under 2:08. Last year, before the use of shoes with carbon fibre inserts became almost universal, the tenth runner finished in 2:08.50.

Seaward’s time was more than three minutes faster than the 2:13:39 he ran in Berlin last September and comfortably inside the Tokyo Olympics qualifying mark of 2:11:30. Three Irish athlete now have qualifying times – the other two are Paul Pollock of Annadale Striders with 2:10.15 from the Valencia Marathon in December and Stephen Scullion of Clonliffe Harriers who finished fifth in 2:11.52 at the “gold label” Houston Marathon last month. All three athletes come from Northern Ireland.

In only his second ever marathon, Hugh Armstrong of Ballina AC missed out on the Olympic time by less than a minute when he finished in a personal best 2:12:26. Mick Clohisey of Raheny Shamrock, who has been struggling with an achilles injury, dropped out of the race.

In the age groups, Ray Hynes of Donore Harriers was sixth M40 in 2:24.15, while Mary Lynch of Raheny Shamrock was Ireland’s only winner of the day when finishing first W65 in 3:39.49.

In Australia, Michelle Finn of Leevale AC won the women’s 3000m steeplechase at the Sydney Track Classic on Saturday (February 22). Her time of 9 mins 38.04 secs was a personal best by over five seconds, and although outside the Tokyo Olympics standard of 9 mins 30 secs, it puts her in a good position to qualify. He finished second in the race, held indoors, behind local athlete Jari Soikkeli who completed a distance of 253.916km, also a Finnish record. There are three Irish 24-hour records records – road, track and indoors – with Eoin Keith’s 248.4km from the 2017 World 24 Hour Championships, held outdoors, previously recognised as the best overall.

Fast Running’s Robbie Britton was in Finland and said “McGroarty ran an excellent race, pacing well from the start and looking almost effortless until the final few hours. He was in the lead and all set for the Irish record when the Finn accelerated around 21 hours in. Sensibly Ed ran his own race and focused on his national mark as we all expected Soikkeli to falter but he just kept going.”

“Both men had an excellent race in the Esport Arena, with the usual carnage of a 24hr race making entertaining watching. Several different race leaders come and went, with some simply faltering and others dropping out of the race altogether. Afterwards McGroarty put his big improvement down to woking heavily on his mental game and he looked like he enjoyed nearly every moment of the event”.

Also in action was Alex O’Shea of St Finbarr’s AC, who completed 170.057km after having some difficulties early on in the event. All hail Mitchell and Johnston

Emma Mitchell and Neil Johnston were the winners of a well-supported Northern Ireland and Ulster cross-country championships, held in rain and hail at University of Ulster Coleraine on Saturday (February 22).

In the women’s race. Mitchell, a member of Dublin club Clonliffe Harriers, was a clear winner in 24 mins 9 secs. Catherine Whoriskey of City of Derry Spartans was over half a minute behind for second in 24:47 and Lauren Wilson of Lagan Valley AC third in 24:53.

Johnston, a member of of Springwell RC, won the men’s race in 44 mins 47 secs, with Eskander Turki of Annadale Striders second in 45:06 and defending champion Mark McKinstry of North Belfast Harriers third in 45.47. The clear winner of team gold ahead of 16 other teams was Newcastle AC, led by Patrick McNiff in fourth place with mountain running international Zak Hanna not far behind for seventh.

City of Derry Spartans AC and North Belfast Harriers were second and third of the teams.

In Dublin’s Phoenix Park, the annual Colours Cross-Country between Trinity College and UCD on Saturday (February 23) resulted in a double victory for Trinity.

In the women’s 4km race, Trinity took the top three places with Cliona Murphy the winner by over a minute in 14 mins 52 secs. The men’s victory was even more comprehensive with Trinity taking five of the top six places. Oisin McKinley led them home, clocking 21 mins 36secs for the 6.44km course.

Winning a thrilling men’s race at the Central Bank BHAA cross-country in Wesley College, Dublin was George Snee of Fidelity Investments Ireland who just made it to the line ahead of Sean Doran of Harrier Products.

So close were the two that they were both given a time of 22mins 33 secs for the four mile course. With one race to go, Doran currently leads the BHAA Winter League Table for Grade A. Best of the A graded teams was Bank of Ireland led by Michael O’Connor in eighth place. Dublin City Council won B, ESB were tops in C and AIB the winners in D.

First woman was Rachel Yorke of Deloitte in 27:06. Grainne Butler of the Health Group was second, while Niamh Corby of Revenue was a close third. Next BHAA race is the CIT 5km in Bishopstown, Cork on Sunday March 1 (11am). That’s followed by the AIB NUI Maynooth Cross-Country on Saturday March 7 (11am) – the final cross-country fixture of the season.

Kevin Maunsell of Clonmel AC showed a welcome return to form when winning the Adare 10km in Co Limerick on Sunday (February 23).

Best of the women was was Sorcha Nic Dhomhnaill of Donore Harriers in 36 mins 41 secs. Dympna Ryan of Dundrum AC and Siobhan O’Doherty of Borrisokane AC were second and third. Former Irish international athlete Rosemary Ryan of Dooneen AC took the W40 prize.

South Galway AC was first of the men’s teams ahead of West Limerick AC and Dooneen AC, with Watergrasshill AC beating Dooneen AC and North Cork AC in the women’s team category.

Winning a well-supported Kinsale 10-Mile on Sunday (February 23) was Pat Hennessy of West Waterford AC in a course record time of 51 mins 13 secs. Jeremy O’Donovan of St Finbarr’s was second and first M40 in 53:55. Clare Gibbons McCarthy of Leevale AC was first woman in 61:21.

A day after finishing second in the Central Bank BHAA Cross-Country, Sean Doran of Clonliffe Harriers was the winner of Sunday’s Clogherhead Seaside 5km in Co Louth with a time of 15 mins 42 secs. First woman was Claire O’Malley of Dunleer AC in 19:37.

In another Sunday race, Brian Kelly of St Abban’s AC in 32 mins 34 secs and Aisling O’Connor of Edenderry AC in 35:31 were the winners at the Graiguecullen 10km.

Anne Gilshinan of Slaney Olympic AC in Enniscorthy, recently named world master athlete of the year for middle distance running, continued her current purple patch with victory in the W55 1500m at the Leinster Indoor Championships at the NIA, Abbotstown, on Saturday (February 22).

At the final NIA Live meet of the season on Tuesday (February 18), 17-year-old Cian McPhillips of Longford AC ran a time of 4:13.00 for the mile – the fastest of the night. Last month, McPhillips improved the Irish junior 1500m to 3:44.85. He then went to New York where he won the boys’ invitational mile at the Millrose Games. Second in the NIA mile race with a time of 4:18.25 was U23 athlete Kevin McGrath of Bohermeen AC.

Not far off the world M50 mile record with a time of 4:26.66 was Shane Healy of Metro St Brigid’s AC. Winning the women’s mile in 4:47.82 was former Irish international athlete Kelly Neely.The National Indoor Championships are the big event for next weekend, taking place at the NIA, Abbotstown.