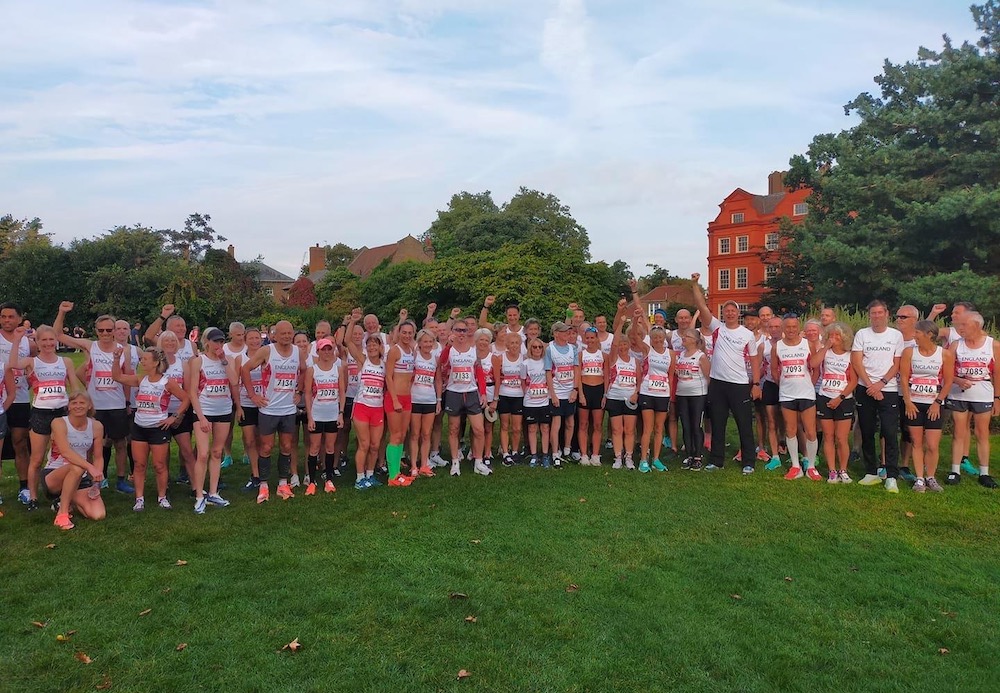 Masters athletes before the start of Richmond Half.

Three athletes are sat dining in the Restaurant of Athletics. As ‘Senior’, ‘Dumb Masters’ and ‘Smart Masters’ are served their three course meal they all tuck in.

‘Senior’ bolts down his starter and is impatient to crack on with his main course before walloping down his dessert no problem- full of testosterone he eats like the proverbial horse.

‘Dumb Masters’ tries to keep up with ‘Senior’ but midway through the main course has to admit defeat before disappearing off to the toilet to manage a severe case of indigestion and the associated flatulence which comes with it. He returns looking a little sheepish before muttering apologetically, “I just can’t eat like I used to”.

Meanwhile ‘Smart Masters’ is taking his time- he’s only just begun on his soup for starters because he’s ordered an hors d’oeuvre to whet his appetite. He is having a five course meal rather than a three course meal and knows he needs to take his time.

He realises that he needs longer recovery in between his training day meals but that by taking his time over an extended microcycle of training, whilst he can no longer quite keep up with the eating pace of ‘Senior’, he can at least avoid the indigestion of ‘Dumb Masters’ who tries in vain to keep up with ‘Senior’ by cramming his eating into a short microcycle

Food based analogies have been used by this author on two previous occasions to articulate training principles (see Long, M. and Lancaster, C. 2020 ‘The Training Menu’. September 3rd and Long, M. 2021 ‘Sweet Tooth’. March 31st). Those two articles focused more on the periodisation of a macrocycle of training whereas this piece zooms in on training microcycles which tend of course to be characterised by days rather than weeks or months.

The purpose of the analogy is to demonstrate this author’s growing conviction that the traditional 7 day microcycle may in many cases be wholly inappropriate for masters athletes whether they run, jump or throw. ‘We know this,’ I hear some of you cry! Rather than trying to teach you to suck eggs, the author’s concern is genuine in having served as both personal and team coach to several masters athletes who have represented their respective countries. We might know what the theory is but the author’s autoethnographic experiences suggests a gap analysis between the textbook and social practice is needed.

We are taught that the good Lord created the world in 6 days and on the 7th he rested and likewise athletics and the club system is shaped to repeat our cultural tradition of time being measured in the 7 day cycle. We tend to train at clubs typically on Tuesdays and Thursdays and then ‘session’ once more at weekends if we are not competing. All too often training cycles are repeated week by week by the unthinking coach or athlete or indeed the frustrated coach or athlete who feels he or she has to comply because that’s the way the world is and ‘some things will never change’ to borrow a line from the Bruce Hornsby lyrical hit.

The problem for masters athletes is that all too often because they are still deemed ‘good for age’ they try and repeat this 7 day cycle which earned them success when they were considerably younger as seniors. This being said the pioneering work of Dr. Margaret Keay (See ‘Masters Athletes’ on athletcshub.co.uk) provides an indication that the training microcycle needs to be extended for athletes who have enhanced biological and/ or training ages. The Durham University and British Association of Sport and Exercise accredited Keay has made a great contribution to understanding how hormonal function decline is associated with a reduced response to training.

In terms of body composition, masters athletes may suffer a decline in both muscle and bone mass conversely with an increase in both subcutaneous and visceral body fat. A decline in bone mineral density can be associated with what medics may frame as ‘Sarcopenia’, which is a progressive and generalised skeletal muscle disorder. Dr. Keay has drawn on the work of Copeland (2004) in forging a comprehension of how and why systemic musculoskeletal changes make it harder to maintain the lean muscle which masters athletes may well have carried as seniors.

In biological terms, both testosterone in males and oestradiol in females will decline to a greater or lesser extent. The anaerobic capacity of an athlete will tend to regress with the masters athlete being exposed to an enhanced risk of injury. All of the above factors make it much harder for training adaptations to take place and contribute to what tends to be a relatively linear decline in performative terms until a marked decline around the eighth decade of life, if the athlete is still retained in the sport.

Training load thus has to be adapted for athletes with a higher biological and training age and rather than just ‘easing off’, it would be more functional and precise to suggest that masters athletes consider working over a microcycle which may typically far exceed the traditional 7 day weekly cycle and extend to 9-11 days.

Of course many senior athletes and their coaches have wised up to this and are doing so, so why aren’t some masters following suit? For endurance athletes, for example, the long steady run may not need to be effected as it traditionally is every Sunday morning. A Sunday morning long run may be effected next 10 days later, for instance, a week on Wednesday.

The athletics club of the twenty-first century may in fact need to consider alternating say Tuesday and Thursday ‘hard session’ club nights with Mondays and Wednesdays for example in order to truly embrace rather than merely to tolerate training microcycles which do not neatly fit into any weekly window.

Far fetched? Impractical? Unworkable? Well certainly it’s a challenge as our sport is based on both the comfort of routine and is underpinned by a limited pool of volunteerism but it’s the kind of blue sky thinking which is needed to take performances to a new level.

So if you are 35 or above, next time you are sat ready to dine in the Restaurant of Athletics have a think about whether you’d like to eat alongside ‘Dumb’ or ‘Smart Masters’ and adjust your training microcycle according to biological and training need rather than the blindness of a falsely loyal weekly routine.

Matt Long was an England Team Manager and Coach for the recent Masters Representative 10k and Half Marathon Matches held in London. He welcomes contact from coaches and athletes through mattlongcoach@gmail.com and his coach education articles are accessible through his Power of 10 entry and are freely disseminated.