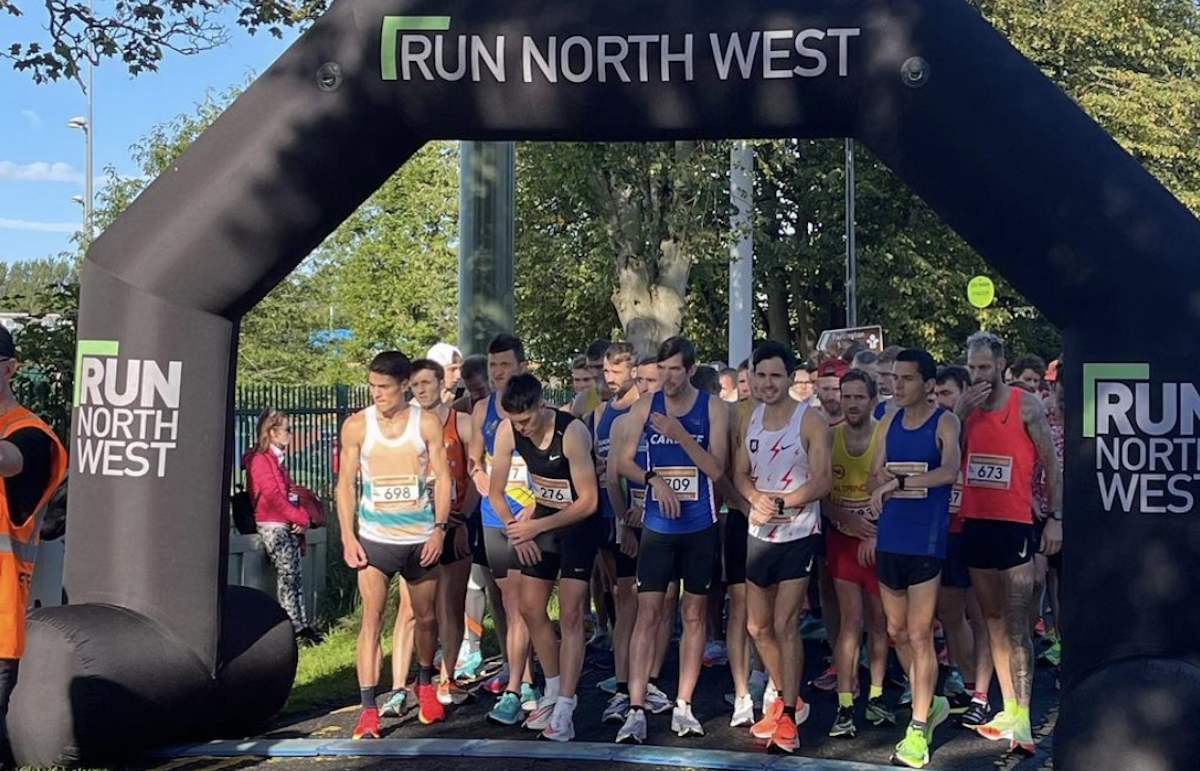 James Rhodes brings you all the action from a busy weekend!

What a bumper week! With the track season drawing to a close and the road season getting into full swing, there’s also been performances on the mountains and cross country to bring you. Some of everything! So without further delay, let’s get straight to business.

There has been so much happening on the roads it is hard to know where to start.

There were some fast times at Sunday’s Admiral Swansea Bay 10k, where Natasha Cockram took a commanding victory, her time of 33:32 almost two minutes ahead of Olivia Tsim (35:20) and Sioned Howells (35:56). Amongst the men, it was Kieran Clements (29:57) who took victory ahead of Abed Teweldebrhan (30:04) and Dewi Griffiths (30:12), with the top six all running under 32 minutes.

About 150 miles to the north, Tracy Barlow (80:12) and Jonathan Escalante Phillips (66:36) won at the ESSAR Chester Half Marathon, in a race where the first 38 runners finished in under 80 minutes.

At the Copenhagen Half Marathon, Sally Ratcliffe (76:23) ran well to finish 20th, a near ten minute improvement on her 2019 PB. Adam Clarke was also in PB shape, crossing the line in thirteenth in 63:30, a 36 second improvement on his result at last year’s Vitality Big Half. Ethiopia’s Adbework Walalegn (59:10) and Tsehay Gemechu (65:08) were the race winners.

In his first race since the Olympic marathon, Chris Thompson finished second at the Great Run Bristol Half Marathon, behind a PB-setting Omar Ahmed, crossing the line in 67:53 to Omar’s 63:08. Jack Millar’s 69:55 rounded out the podium. It was an equally high-quality women’s race, with Chloe Richardson (78:18) getting the better of Victoria Kenny (81:02) and Shona Crombie-Hicks (84:22). Jack Bancroft (31:13) and Hannah Anderson (35:04) took wins in the associated 10k race.

As he gears up for his marathon debut in two weeks time, Phil Sesemann took a convincing win at the Trafford 10k(29:29), finishing almost a minute and a half ahead of the rest of the field. Danielle Hodgkinson had an equally emphatic win over the course, finishing in 33:59. Sunday’s Scottish Half Marathon provided Simon Crawford (69:20) and Shona McIntosh (80:29) with race victories, and in a different race of the same distance beginning with an s, it was Kelly Butler (82:34) and Matthew Costello (72:13) who took the honours at the Stafford Half Marathon.

James Turner recorded an emphatic victory at the Folkstone Rotary Half Marathon on Sunday, finishing almost five minutes ahead of second placed Peer Lighting (72:26 to 77:13). Amy Stimpson’s 98:01 was three minutes quicker than Laura Archer in second. Also on Sunday, Lee Johnson (1:27:09) and Helen Etherington (1:38:53) crossed the line first at the Cransley Hospice Half Marathon.

Earlier in the week, Battersea Park played host to the third Under the Lights 5K on Thursday, where Holly Archer (15:49) and Taha Ghafari (14:17) took wins over the two lap course (ironically, thanks to a power cut, there were no lights in Battersea Park!).

Goodbye to the Track Season

As the curtain draws to a close on what has been a fantastic summer track season, the number of events to bring you both at home and abroad is getting ever shorter.

A trio of Brits were in action over 800m at the Memorial Borisa Hanžekovića in Zagreb on Tuesday, the penultimate stop of World Athletics’ Continental Tour Gold, with Dan Rowden (1:44.98) just finishing ahead of Elliot Giles (1:45.01) and Tom Randolph (1:45.83) in second, third and eighth respectively. The race was won by Romanian Catalin Tecucueanu (1:44.93) in a new National Record.

It would be remiss of me to not mention Francine Niyonsaba, who set a new World Record over 2000m of 5:21.56, bettering the previous time of Genzebe Dibaba, set indoors four and half years ago, by over two seconds.

After a hugely successful year, the Continental Tour Gold drew to a close on Saturday with the Kip Keino Classic in Nairobi, with no Brits in action.

The domestic track season is also drawing to a close, but that does not mean there are no results for me to bring you.

Tuesday saw the Hertfordshire & Bedfordshire 1500m Championships held in St Albans, where Joseph Chamberlain (4:16.4) was the fastest athlete by over six seconds. Crossing the line in 4:28.1, U15 athlete Phoebe Gill was just two-tenths shy of a PB as the fastest female over three and three-quarter laps.

I end the track section with the longest run on the track this weekend, Self Transendence’s 24 Hour Track Race at Battersea Park. Starting at midday on Saturday, Jen Coleman ran very well to cover a total of 227.115km. That’s over 560 laps of the track. Peter Abraham covered 231km, of 143 miles. That’s almost the distance between London and Sheffield, for comparison.

In the Mountains & Ultras

At the World Mountain and Trail Running Championships Uphill Only Trail Races on Skiddaw, Joe Dugdale (39.03) and Hannah Horsburgh (42.29) were quickest of a small but high qaulity field which include road specialists such as Andrew Heyes and Claire Duck. Chris Ricahrdss claimed the 2nd automatic selection spot for the men clocking 39:17 just edging out Jacob Adkin (39:19). Scout Adkin claimed the crucial 2nd place woman spot with 43:39 ahead of Katherine Maltby (45:19). The Up & Down trials also took place today and we await official results.

Tasmania based Brit Fergus Edwards was the winner of the Rail Trail Run and Ride 54km on the Australian island this weekend. With just 10 seconds separating first and second at the turn-around point, Edwards ran a strong second half into a headwind to cross the line in 4:08 and win by ten minutes. I used to end these round ups with a handful of results from the USA. As the collegiate break came into force, the races dried up. But fear not – they are back! You know we are moving towards the autumn months when there are a flurry of collegiate cross country races taking place across the United States as a new crop of young British athletes settle in to university life across the pond.

Some notable performances this week include Sarah Chapman (17:30 5k) at the Commodore Classic in Tennessee, Katy-Ann McDonald (17:57 5k) at the LSU Invitational in Louisiana, a second place for Charles Hicks (23:33 8k) at the FSU Invitational in Florida, Lachlan Wellington (25:19 8k) claiming a win at the Iona Meet of Champions in New York and Bethaney Donnelly (17:48 5k) finishing third at the Dartmouth Invitational in Massachusetts.