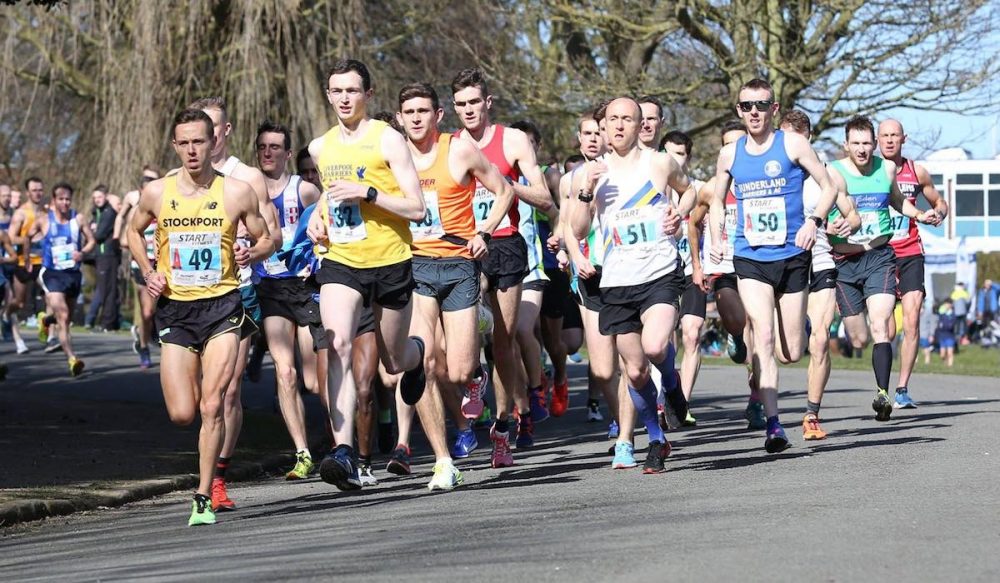 Leeds City and Aldershot are among the winners at the Area Road Relay Championships, while Callum Hawkins and Dewi Griffiths impress overseas.

While the full results were available within a few hours for the Northern relays, the Southern results had not been published by the evening of the event. Straw ran 20:41 to pick up four places and put his brother, Tom, in a strong position going off on the third leg.

Tom’s speedy 19:59 kept Lincoln in the bronze medal position, but it was the team’s fastest runner on the day, Lucian Allison, who ran a vitally important 19:40 leg to put the club in the lead on the fourth stage.

Shane Robinson and Matt Bowser both ran superbly to maintain their gold medal winning position on the fifth and sixth legs with runs of 20:06 and 19:44 respectively to ensure the cathedral city club took the top honours on a sunny day in Manchester.

Leeds City’s gold medal winning women’s quad was led out in style by former international Stevie Stockton, who proved she is coming back into impressive form with her performance here today.

Her 20:24 ensured the team were ahead after the first leg, and, passing onto Georgia Malir, followed by Emma Clayton and finally Claire Duck, the club never left the podium positions.

The top three teams were well ahead of their nearest rivals, Salford Harriers, who were nearly two minutes adrift from the podium.

Blackburn Harriers’ Jess Judd ran the fastest 5.4k leg in an incredible 19:22, which was 30 seconds quicker than the second fastest on the day, Leigh Harriers’ Lauren Howarth. Leeds’ Stevie Stockton’s 20:24 was just two seconds behind Howarth.

Guernsey AC’s women took the title at Crystal Palace ahead of Highgate Harriers, with Wycombe Phoenix taking the bronze medals over the four stages of 4.8k each.

Guernsey’s victorious foursome was made up of Laura McCarthy, Jenny James, Sarah Mercier and Louise Perrio, winning gold in a total time of 69:28. Cardiff’s prolific race winner, Matt Clowes, won in style in a superb 65:10, just half a minute shy of his lifetime best recorded in February. Exmouth’s Tom Merson was a distant second in 69:34.

Swansea’s Matthew Rees may have been third, but he recorded a massive 69:51 PB, knocking more than a minute off his previous best of 71:04 and a huge season’s best of more than two minutes.

Clowes’ club mate Clara Evans ensured the Welsh club took the top honours in both the men’s and women’s races when she won in a time of 76:26. Torbay AC’s Charlie Arnell’s 77:28 was a PB by over a minute, while Serpentine’s Marta Bagnati’s 78:38 was also a significant lifetime best.

Cardiff had yet more winners here in Sheffield, when Steve Jones-coached athlete, Michael Kallenberg, won in 32:11.

Kallenberg was some way ahead of second placed Joe Sagar, who crossed the line in 32:50, while Sheffield & Dearne’s Jo Newman-Billington ran a 33:44 PB, a fine feat for the teenage talent.

Nicola Holland was the first woman across the line in 37:46, ahead of Biggleswade’s Elaine Livera’s 38:28 PB. Steel City’s Ashleigh Barron was also in PB form when she finished third in 39:30.

Cambridge & Coleridge’s multi-talented duathlete and triathlete, Georgina Schwiening, was in a class of her own when she took the title here in 2:53:28 to finish 11th overall.

While it was some way off her 2:42:54 PB from last November’s Valencia Marathon, it was still an improvement on her 2:54:30 recorded in London this year.

Fairlands Valey Spartans’ Natalie Lawrence may have been some way back in second but her time of 3:05:12 was nevertheless a fine PB. Roundhay Runners’ Laura Reid took third in 3:23:10.

It was a tight battle for the title here between Matthew Costello and Craig Pilsbury, with just three seconds separating the two in the end.

Uttoxeter’s Ian Salt was third in 35:00, although fourth placed Scott Minshall from Trentham RC was given exactly the same time.

On a day of close finishes, less than a minute separated the top three women at Stafford. Cannock & Stafford’s young teen, Giorgia Chattwood took the top spoils in a 39:11 PB, ahead of Wolverhampton & Bilston’s Lucy Calrow’s 39:49 and Notts AC’s Sarah Mackness’s 39:54.

At the Dam tot Damloop in Holland, Callum Hawkins posted a time of 47:01 to finish in eighth place amongst a top international field. It was the Scottish marathoners first official time racing over 10 miles.

Fellow British athlete Dewi Griffiths was also competing and continued his comeback from injury with a 47:20 personal best performance to finish 11th overall.

The women’s quartet retained their title, while the men’s team claimed their first win in almost 10 years.

Allan Stewart and Isabel Clark ran the fastest parkrun times in the UK on Saturday. Chiltern Harriers’ Stewart ran 15:24 at the Bushy parkrun to take the men’s honours, while also at the Bushy event, Serpentine AC’s Clark posted a quick 17:04 to bag the women’s top spot.

The 10 fastest times across the UK this weekend can be found here.