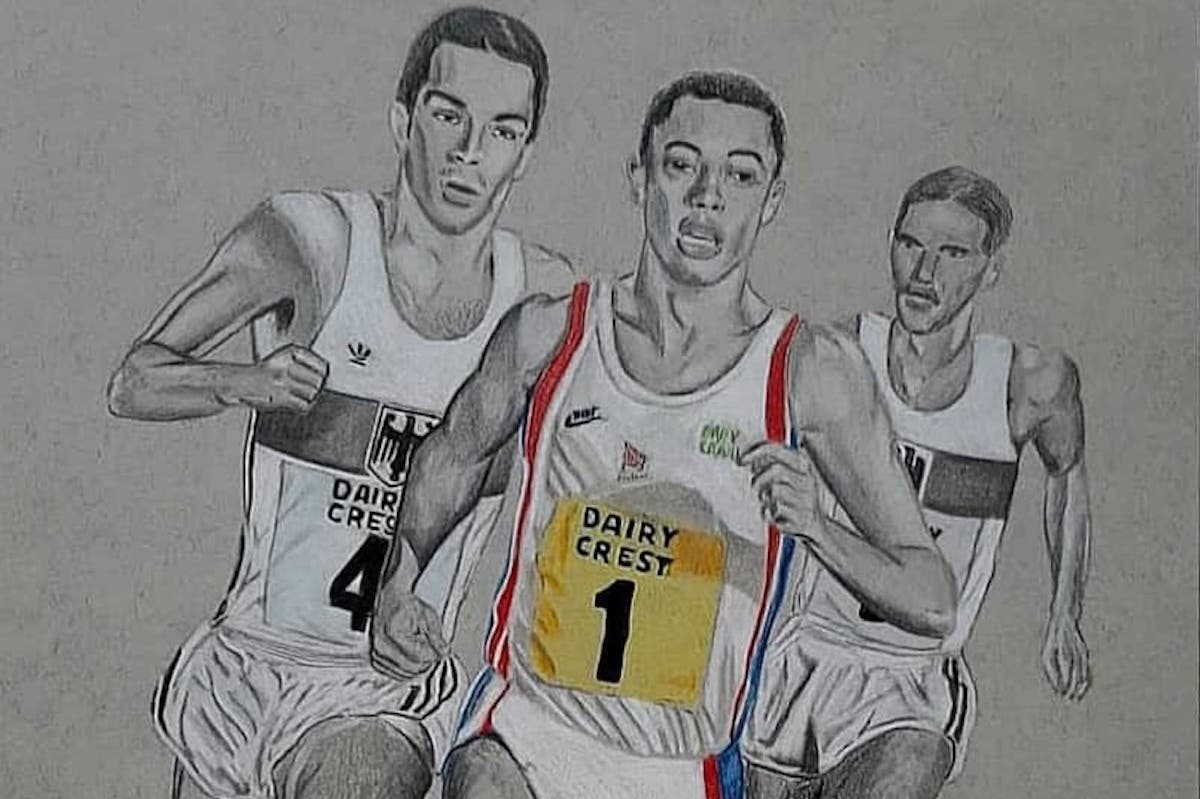 The Spanish National anthem is being raised and the Marcha Real is ringing out throughout the indoor stadium in the French capital as Coloman Trabado and fellow countryman Benjamin Gonzalez take the applause of the crowd.

Clutching his bronze medal is a young Wirral based athlete whose 1:48.28 over four indoor circuits has etched his name permanently in the history books, remarkably so as he is still 6 days shy of his 21st birthday.

Ikem Billy, from Birkenhead in Cheshire is the World Indoor 800m bronze medallist at a time when Sebastian Coe has months before become the first man in history to retain an Olympic 1500m title in Los Angeles. Months after Ikem’s success, Steve Cram will go on to smash three world records in just 19 days.

This is track and fields’ era of ‘Cool Britannia’, a decade before the likes of Blur, Oasis and the Spice Girls will strut their stuff and be accorded a similar label with regard to their exploits in the music industry.

The 57 year old based in Yorkshire has little to do with athletics at the formal level aside from, “getting across to a couple of Diamond leagues with a few mates every season”. He currently works in health and social care- looking after people who have suffered devastating spinal or brain injuries typically in accidents such as car crashes.

“I switched from retail to healthcare shortly after my sister died”, he says with candour- “I’d spent most of my life in sales and wanted to do something for the social good”. Together with partner, Sally, who was herself an international athlete and has a doctorate in physiology, they plan to set up their own company – Podium – that ventures further into what is an obvious passion, namely health and well-being.

When I remind him that I’m old enough to remember reading about his exploits when he bagged European junior 800m gold in 1983, with modesty he shrugs and says, “I was just playing with the sport really”.

‘Serious’ is not a word that springs to mind when one is in the company of the affable, laugh a minute, Ikem Billy. Continuing his trait of self-deprecation he adds, “I only did the indoors because I hated cross country!”.

Keen to play down the impact of his global bronze medal, achieved a year after placing 4th in the European indoors, he laughs whilst acknowledging, “Athletes in my day didn’t get the hype that they do these days. These days I’d get a massive sponsorship deal for a world bronze medal”.

The former Loughborough University student was signposted to the late, great Gordon Surtees by Steve Ovett’s coach, Harry Wilson. With a chuckle, Ikem admits, “We were like chalk and cheese really. That being said to his credit he sussed me out pretty quickly and realised I hadn’t got the personality type to train 2 or 3 times a day”.

I did most of the sessions Gordon set on my own at Loughborough but his words of mentorship rang in my ears. He had some gems like, ‘Don’t chase crimes, just win races’. The other one liner was. ‘Use your speed to open gaps and not close them’”.

Ikem could not be described as an ‘aerobic animal’ due to the comparative lack of volume in his training but he was clearly a fan of race specific modes of speed endurance sessions. “In the summer my key session was 4 x 400m. I’d run them pretty much flat out in 47s and have a full recovery -sometimes 20 mins between reps. In the winter I tended to time trial over 5k, with Gordon telling me to throw in some 300 metre based sessions just to keep my legs turning over”.

Mixing it with the greats

Ikem’s eyes light up when he recalls a winter training tour of Australia with the likes of Steve Cram, Peter Elliot, John Walker and Ray Flynn, back in 1984 just before his global medal. When pressed he says that, “Without question, the fiercest competitor I ever faced was not Seb Coe or Steve Ovett- it was Peter Elliott”. The Seoul Olympic 1500m silver medallist is credited with having had, “No reverse gear. 5th gear is all he had!”.

Despite a phenomenal win and magnificent lifetime best of 1:44.65 in the forerunner of the Diamond League in Oslo and having helped Steve Cram to get in shape for Los Angeles in 1984, Ikem would have to watch the Olympics on television. This was indeed the golden era of Coe, Ovett and Cram and Ikem’s comment that, “It was so hard to get past them,” seems metaphorical as well a literal.

Between 1985 and 1989, Ikem was sadly largely lost to the sport. “My left ankle basically kept collapsing”, he says. I had over-raced in 1984 and was paying the price. I’m a big Everton fan and player Paul Bracewell helped me to access their physio who put me on the long road to recovery”. With a shake of the head he painfully recalls that, “I basically spent the whole of 1987 in plaster but then in the late 80’s got some fitness back through aqua jogging”.

He was back with a bang in 1989 running an eye catching 1m45.27s at Crystal Palace and his comeback seemed complete when selected for Team England at the 1990 Commonwealth Games. Bound by a sales job meaning he had to work from 6am ‘til late at night, training opportunities were snatched at but Ikem managed a creditable 5th in the 800m final, managing to get the better of Seb Coe himself and Tom McKean. “After that I set my sights on the Barcelona Olympics but a hamstring injury put paid to that and that was me done in athletics really”, he says matter of factly and without bitterness.

Generous in his appraisal of our current two lap Team GB talent, he describes Elliot Giles as, “a beast of an athlete”, before adding that, “It was about time someone broke Seb Coe’s four decade old British indoor record. There is a new crop of middle-distance runners that are finally eradicating the times set 35 years ago. Whether it has something to do with technology- then so be it”.

A nod of approval is sent to European indoor bronze medallist Jamie Webb and European junior champion Max Burgin but special praise is reserved for the “rare talent” who he sees in the form of reigning British Champion Daniel Rowden.

It’s time for Ikem to get back to the work that he has thrown himself into and the Birkenhead man flashes one last mischievous grin as wide as the Cheshire cat, popularised in Lewis Carroll’s ‘Alice’s Adventures in Wonderland’. The athletics Gods were smiling on him in Paris in 1985 and Ikem Billy is still grinning back at them 36 years later and rightly so.

Matt Long is Men’s Midlands Team Manager for Road & XC and the Midlands Masters Squad. He can be contacted for support through mattlongcoach@gmail.com