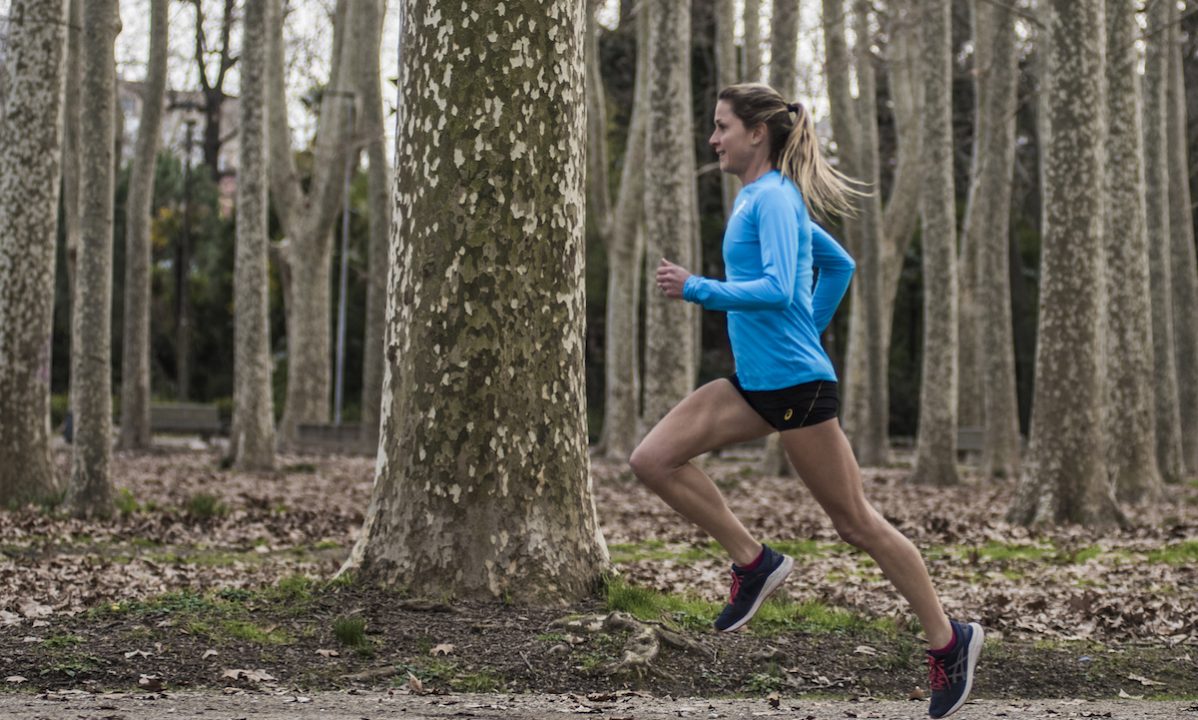 The Bristol & West athlete’s win in Manchester was the result of years of hard graft, team work and an impressive feat of juggling training with work and parenthood.

The Spain-based British runner has not had an easy ride back to elite marathon racing, though, a topic she discussed in an earlier article.

It’s easy to forget how many hard sessions have been gritted out and seemingly endless obstacles overcome when you see photos depicting victorious athlete’s arms held aloft in joy when crossing the line first.

Spink is no different. Her list of injuries and illnesses sustained over the last 12 years is substantial, and many an athlete may have given up in the face of such adversity.

This 37 year-old is made of much sterner stuff though, and, thanks to a support crew which includes her husband, son, coaches past (the great Bruce Tulloh) and present (Josep Carballude) and many more besides, she bounced back in spectacular fashion to take the title in Manchester.

Spink’s support crew clearly played a major part in helping her complete pretty intense training blocks in the lead up to the marathon earlier this month.

That support is also crucial to her being able to juggle work as a coach and a teacher in between sessions.

“I juggle a number of jobs that fit around training and being a mum,” she explains. “Since moving to Spain I’ve been teaching English at a language school alongside some sports massage.

“I also coach a handful of people online, as well as helping a few runners locally with their running technique. In addition I’m part of the 2:09 Events coaching team on their spring training camp in Portugal.

“It’s always a challenge fitting everything in, but I think when you’re busy and you don’t have a choice of when you train, you have to make the time you have to run count.”

Making the most of running with others on training camps

Spink explains that she does most of my training alone for much of the year, so the training camps she attends or works at are always a real boost to her own running.

“It’s great to have company and support on the long run – running on the beach in the morning with a quick dip in the sea on the Portugal training camp before breakfast is a great way to start the day too,” she says happily. “The camps are fantastic and have always been friendly and inclusive irrespective of running ability. I always come away inspired, having trained hard, made some new friends and learned something new.”

While those few weeks a year when Spink gets to train with others are a blessing to the 2:35 marathoner, she grinds most of her miles out solo.

She took time out to share a ‘typical’ training week with Fast Running to give an insight into exactly what it takes to win one of the UK’s biggest marathons by more than four minutes.

PM 8-10km followed by 8x150m strides (again off road around a nature reserve or the river). Sometimes my 8 year-old son comes with me on the bike if I haven’t been able to get both runs done before he finishes school.

AM: 10km steady run (8km steady, gym and core, 2km steady). I do the gym work in my garden and this consists of TRX exercises, kettle bells, skipping with a rope, hurdles and plyometrics. A friend of mine often comes to join in which makes it more fun and we generally push each other harder.

AM: This varies but it is usually one of the hardest days of the week. It will either be a progressive run, a fartlek session or a track session. Basically, some form of intervals.

Some session examples would be:

16km (3km warm up and then starting the progression at 4min/km pace and gradually picking up the pace ending with the last 3km at 3:35/km pace.) My husband got back running for this training block so was able to join me on these, which helped a lot!

Both the fartlek and the progressive run are done on the disused railway path.

AM: Swim (2.5km front crawl, varying breathing from every 3-5 strokes)

Long run day. The longest run being 38km. This is also a key session.

Spink explains how the long runs worked in the run up to Manchester, with many involving the whole family.

“For one of my long runs I got dropped off 37km away and ran home along the disused railway line,” she explains. “My husband and son would jump out the car at various points to cheer me on and hand up drinks.

“It was refreshing to do something different and felt like more of an adventure!

“For all the long runs I practiced taking on gels as I used to struggle with them, especially in a marathon, but I’ve forced myself to overcome that.”

With all of these double days, intense long runs and multiple sessions stacking up in her legs, week after week, which is Spink’s favourite session of all?

“My favourite session is always 20x400m with 60 secs recovery because I know exactly where I am at,” she reveals. “It gives me confidence or highlights that more work needs to be done.

“I also find that just having to think about one lap of the track is refreshing. It’s easy to keep in the zone compared to longer marathon paced efforts.” The French mountain region is a favourite altitude training destination for the Bristol & West athlete, helped hugely by the fact it’s only a 240 minute drive from their home in Spain.

Spink is sure her latest stint in Font Romeu paid dividends when it came to racing on the streets of Manchester just a few weeks later.

“I think running in the mountains made me a lot stronger, along with the altitude benefits,” she agrees. “I did a lot of steady running just enjoying being up the mountains, along with harder track sessions and then the longer runs lower down at Lake Matemale.

“It also reminds me of Bruce when I’m there, as he used to take Richard Nerurkar (the fourth fastest British marathon runner of all time with a 2:08:36 PB) here.”

While Tulloh clearly had a hugely positive influence on Spink’s blossoming running career when he started coaching her in 2014, her current coach Josep Carballude is now her guiding light.

The Spaniard took over her coaching full time when Tulloh passed away last April.

“Josep lives locally and had seen me at training each week, even when Bruce was still coaching me,” she explains. “It seemed the right decision for him to take over, but I still miss Bruce dearly.”

Spink is an inspiring example of an athlete who refuses to give up, regardless of what issues have been thrown at her and losses she’s suffered along the way.

Moral of this story: stay positive, get a great support crew and keep up plenty of non-running related interests outside of training to ensure a healthy balance is achieved.

How I train: Nigel Martin and his 65:26 win at Wilmslow Half
13:30 man Sam Stabler just keeps smiling against injury woes