Jenny Spink’s Manchester win after long road back from injury 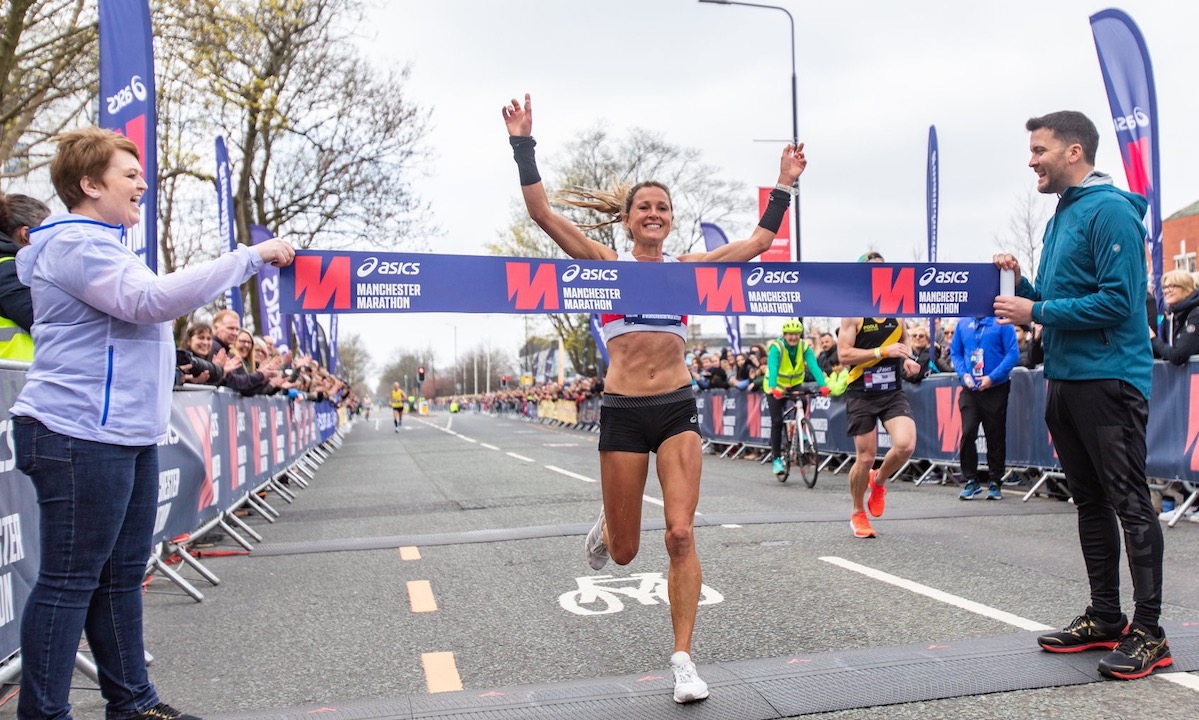 When Jenny Spink broke the winner’s tape at the Manchester Marathon earlier this month in a 2:35:19 PB it was a victory in so many more ways than simply topping the podium.

Her win over a competitive field was solid proof that all the hard work she’d put in to regain fitness and health following a nerve injury two years earlier had paid off.

Spink first started to enjoy the fruits of her labour competitively last December, when she ran 2:36:54 in Valencia to finish second Brit behind debutant Steph Twell.

Sandwiched in between Valencia and Manchester was an impressive run in the England vest at the notoriously tough Granollers Half Marathon, where she ran 75:24 on the grinding Spanish hills.

It was her win in the northern capital that really represented the icing on the cake for her return to elite marathon racing in the UK, a race win well deserved.

The Bristol & West ace explains: “I was feeling confident leading into the race, having run well in Valencia four months earlier. I’d had consistent training in this block and the long runs with marathon pace had gone well too.

“I always draw confidence from past races and the Granollers Half, although not my fastest time, was a good performance on a tough course. There is always uncertainty with marathons but I felt prepared to take on the challenge.”

However, the Josep Carballude-coached athlete has had to fight hard to get back to her best form this year following more than a decade littered with injuries, nerve pains and illnesses that have often threatened to call time on her career.

A move to Spain back in 2016 may mean she now enjoys more warm-weather training sessions than most British athletes, but settling her son Josh into Spanish schools alongside finding work in a foreign country can’t have been easy in the early stages.

Looking back on Spink’s career so far, which includes PBs of 33:34, 56:18 and 73:01 for 10k, 10M and the half marathon, alongside numerous sub-2:40 marathons, it’s incredible to think how she’s achieved so much despite being so beset with injuries and illness.

Four stress fractures (one sustained two weeks before a marathon), shingles and nerve pain stand out as the major issues she’s had to deal with along the way to that Manchester win. She concedes that the shingles virus was probably caused by the combination of training with a lack of sleep and recovery following the birth of her son – “it knocked me for six, and then recurred in the early stages of building for the London Marathon in 2015”.

The nerve pain issue was the most recent significant set back she’s had to endure, beginning back in 2017. It was so bad she was forced to completely rest, meaning the long road back to fitness lasted well over a year.

Spink explains exactly what she went through: “I was experiencing terrible pain in my heels, which was nerve pain coming from my back. This injury was probably the hardest as I couldn’t cross-train to keep my fitness because my back was too painful.

“I lost so much fitness and it has really taken me up until now to claw my way back to where I was before. It’s been a lot of hard work and I’ve considered throwing the towel in a number of times, but I am now glad that I’ve persevered!”

While the 37 year-old trained massage practitioner feels fortunate in having a husband, Rich, who is a physio and can therefore give her treatment whenever she needs it – time permitting – she also turns to alternative therapies alongside the more conventional healing methods.

“I’ve found cupping and acupuncture to be really effective, alongside massage,” she reveals. “With my massage training I have a fairly good idea of what is going on with my own injuries and aches and pains, but I generally leave the treatment to my husband!”

Looking back on Spink’s progression up the marathon ranks – she revised her PB from 2:52 to 2:35 in two years – it would be pertinent to ask how she managed such an impressive leap in form while suffering with so many injuries.

While the background reasons for these progressions can never be narrowed down to one thing, one person certainly can take credit for the majority of Spink’s improvements during that time and beyond – Bruce Tulloh.

The 1962 European 5000m champion, long time Runner’s World writer and accomplished ultra runner (he ran 2876 miles across America in 64 days – an impressive 44 miles a day average) was a huge influence on her from the moment they started working together in 2014.

Spink explains how they first began to work together: “I had known him for years through Mike Gratton’s training camps (Gratton ran 2:09:43 to win the London marathon in 1983 and now owns a running training and racing company, 2:09 Events).

“It was on one of those camps that Bruce said he ‘needed a new project’ and asked me if I wanted to be coached by him.

“It came at just the right time as I was feeling disheartened with my running. At this point I felt my marathon times had never reflected the work I’d put in or what I was capable of.

“Bruce’s approach was more about quality than high volume. He made me realise the easy days need to be easy to recover and make the hard days really hard. He and his wife Sue very much worked as a team and welcomed me in as part of the family.

“Often when I’d go to train in Marlborough Sue would look after my son Josh while I trained at the track with Bruce. We would all have lunch together afterwards.

“Even though Bruce is no longer with us he still inspires me to run and race.” Another major source of inspiration, strength and comfort for Spink is her faith.

“My faith is a big part of my life,” she agrees. “It’s really helped me in the hard times of injury when I’ve felt in the depths to know that with God’s help he can get me back to running fast again, even when I doubt myself.”

She tells a story that gives a clear insight into how she draws inspiration for her running directly from the Bible .

“Many years ago I read a Bible verse from Habakkuk 3:19, which is: “The Sovereign LORD is my strength; he makes my feet like the feet of a deer, he enables me to reach the heights,” she explains.

“This verse gave me hope. It was reinforced the following week when I was on the running track on my own wondering how I was ever going to get back running fast again when a deer came out of the woods.

“It didn’t just stay on the grass – it came onto the track and did a few big leaps along the far straight before running off. I was amazed and have held onto that verse ever since.

“That is also why I love running – being out in the beauty of nature, having that head space and time with God.

“In the Manchester Marathon I felt peaceful to go out with confidence and trust that I could do this. To dare to believe. I think my faith helped that.”

Who knows how far this resilient, endlessly positive athlete can go, but suffice to say she has one of the strongest support crews around to make sure she never ever gives up.

Keep an eye out for a follow up piece on Jenny’s training and how she achieved her 2:35 Manchester Marathon winning time, her current coaching set up and how she juggles work, training and motherhood so successfully.

Nigel Martin on running faster than he’d ever believed possible
How I train: Nigel Martin and his 65:26 win at Wilmslow Half