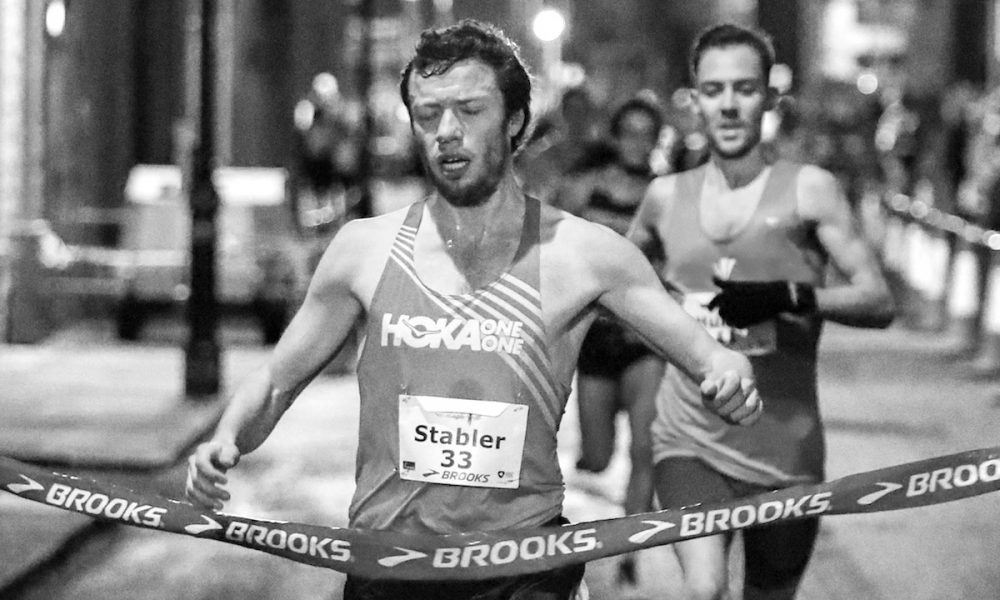 The Wreake & Soar Valley ace gives a humorous insight into his injury CV, 5000m racing in the UK and what an average day in the life of a 13:30 athlete looks like.

Sam Stabler’s athletics career CV is an impressive read, if a little…interrupted. That 13:30 5000m is just one of a plethora of fine track, road and cross country performances.

Why then, has this obvious talent on all surfaces – he was fifth at this year’s Armagh Cross Challenge International and runner up at last year’s Inter Counties Cross Country – not progressed to more regular appearances in the GB vest?

Injuries have plagued the 26 year-old, to such an extent that he concedes his training now ‘consists of trying to catch up on 25 years of missed core’!

“If I was a horse, I would have been shot by now,” he says with a wry smile. “Running can be a very frustrating and upsetting sport! Fortunately it’s full of great people who are always willing to help and motivate you.”

Happily this Rob Denmark-coached speedster has a very strong sense of humour, which has clearly helped him stay positive throughout the many injury layoffs he’s experienced over the last decade.

“The injuries started with anterior component syndrome when I was 16, followed by a total of two years of missed training until I was 20 with quad tracking issues (Vastus Medialis Oblique tracking),” he explains. “I’ve not had it since thanks to a month of thigh weights.”

“I also had a calf issue which was caused by my old technique (toe running). I changed this with hours of underwater treadmill work and taping my feet, which made for a very sore Achilles!

“Then I had calf issues from hip misalignment. Dr Bob aka ‘the least PC Texas Ranger Vietnam veteran you could ever meet’ sorted that one out.

“He used to say he’d become a chiropractor to make up for the necks he had broken in ‘Nam. That’s one of the more repeatable stories. Lovely bloke though.” While Stabler has been ravaged with injuries – he can also count Achillies crepitus and back issues in that injury CV – he seems blessed by an ability to bounce straight back into fast performances, despite not believing in cross training when unable to run.

He explains: “That hip-related calf problem lasted for 11-12 weeks, but the moment I was clicked back into place by Dr Bob it disappeared. I was able to do a track session the next day, although that probably wasn’t the best idea!

“I did try cross training but it always seemed to make things worse. There was even a hip flexor injury from aqua jogging, which lasted longer than the initial knee problem!

“I think it’s best to let the body recover and then, only when everything is healed, start training again.”

He had to write off half of last year due to back and hip problems – an injury he’s still managing.

“It isn’t so bad this time around as I can still train, but sometimes I run 4:30s for mile reps while other times I do the same session and struggle to hit sub-5s, which means racing is a bit more like Russian Roulette,” he explains.

Racing is definitely something Stabler loves doing, but the Lamar University alumnus has grown tired of having to travel abroad to achieve 13:30 results over the 3.1m distance.

Stabler is the co-organiser of this year’s inaugural day of 5000m races at Nottingham’s Harvey Hadden Athletics Stadium, which will take place on July 27th.

“I got fed up with having to fly to Belgium to run fast, so decided it would be easier to put a meet on,” he explains.

“We’ve already assembled a good field. There’ll be up to 16 races, all with pace makers, and will aim to go to 4km. Elite entry is free but open entry is only £8.”

It’s impressive how this busy working athlete manages to find time to organise events of this scale.

He admits he’s in the process of putting some major life changes in place to allow for a better work-life balance.

Handing in his notice at his job in engineering at Singleton Birch in Grimsby is the first step to a healthier Sam Stabler, he hopes.

“I’m hoping to reduce the amount of driving due to my back problem and focus on a business I’ve started called ‘I’m Your Host’, he explains.

“We manage properties all over the country, so if anyone ever needs an Airbnb then let me know and be our guest!

“It’s been a great job and I’ve learnt a lot. However, will I miss the 6am tempos in the dark, down the canal in winter? Probably not!”

A day in the life of Sam Stabler – sleep, pacing school pupils on his lunch break, and poker

So what does Stabler’s work-life balance look like at the moment?

Before he finishes his engineering job at the end of May it will continue to involve early starts, but also regular nap breaks and poker nights!

“Let’s take a Thursday as an example,” he begins. “I wake up at 6:15am, questioning life decisions to go to a networking breakfast group which starts at 6:45am. I used to wake up at 5:45am but I’ve pushed it back every week as sleep is sacred.

“After that’s finished I work until 11am, then use my lunch break to run. For this session I go to a school where the teachers can’t keep up with the faster kids so have to hire me.

“This fits in well as the shakeout part of a 10miler. For 30 minutes of the week I’m a professional runner!

“Then 2pm is nap time. The life skill of being able to sleep for 9-10 hours a night and nap for an hour a day has taken years of honing, but is unfortunately one that I am now only able to practice on Thursdays.

“Then it’s back to work until 6pm then chill before heading to whoever is hosting poker for 7pm. It’s good fun and you learn something new each week.”

Training memories – the fallout from running with a cold

While he concedes he has to train on his own most of the time these days, he has happy memories of running with others.

One particular memory with Aldershot, Farnham & District’s Joe Wade stands out above all else.

Stabler paints a vivid picture which many runners – if completely honest – will closely relate to!

“It was a crisp September morning and we’d just finished a hard tempo,” he explains. “I’d recently had a cold and, out of respect to my fellow teammates, decided to bring a tissue as opposed to firing dangerous snot rockets.

“However, one of the bullets eluded my tissue’s grasp and, like a heat seeking missile, shot 10m through the air onto the chest of Joe, landed on his ‘I’m coming down fast but I’m still miles above you’ tattoo.

“He was not amused and quickly closed the 10m gap before, just as quickly, calming down and ended it with a ‘Euughhhh, Bloody hell Stabs’.” Looking ahead to summer races

The Highgate Harriers’ Night of the 10,000m PBs is Stabler’s next racing goal, which his fellow competitors will no doubt be hoping will be a snot rocket-free experience.

“Failing that I will just eat ice cream and cookie dough, and maybe do a parkrun,” he adds!

Following the recent impressive set of results at the Brighton 10k, where 19 men broke 30 minutes, this year’s English National 10,000m Championships promises to be an exciting affair where Stabler could well thrive.

Keep an eye on Fast Running for a follow up piece where we chat with Sam about his training.