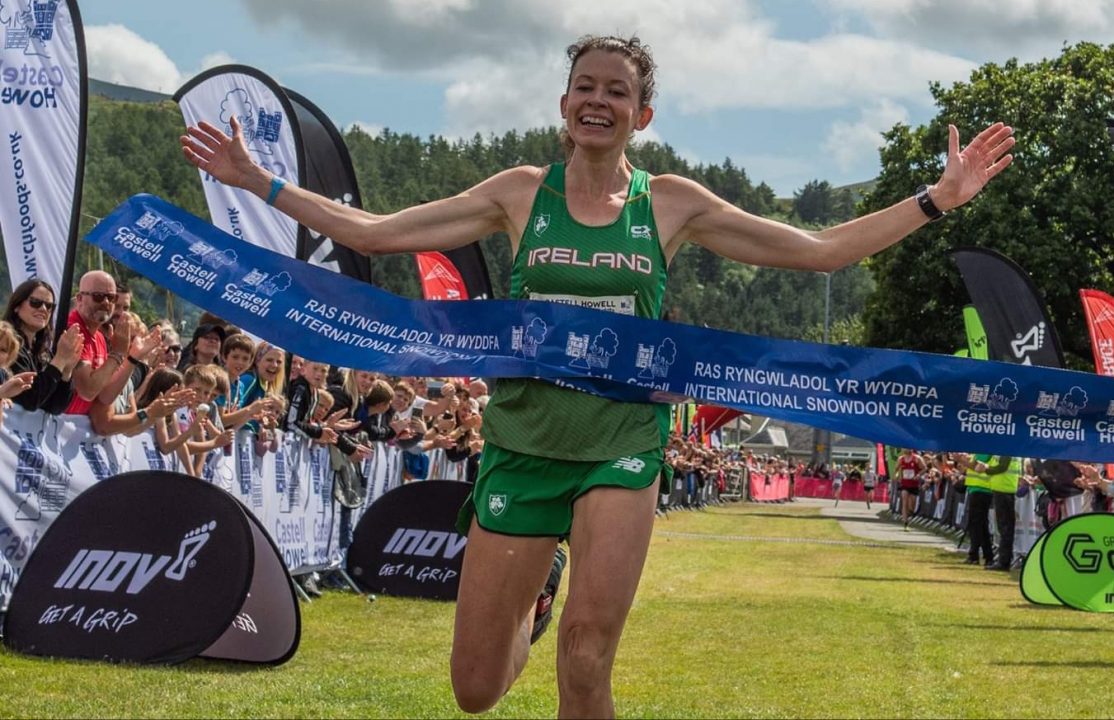 In an exciting weekend of athletics Irish athletes excelled on the track, field, roads and mountains. Here’s the full roundup from Lindie Naughton.

Early leaders beaten to the line at South Dublin 10km

Paul Pollock of Annadale Striders was the winner of a competitive men’s race at the South Dublin 10km in Clondalkin, Dublin on Sunday (July 21).

Pollock pulled away in the second half of the race to win in a time of 29:28. Finishing second in 29:44 was early leader Mick Clohisey of Raheny Shamrock, with Hiko Tonosa of Dundrum South Dublin AC third in 30:03. Finishing fourth and first M35 in 30:31 was Mark Kenneally of Clonliffe Harriers, while fifth in 31:05 was Peter Somba of Dunboyne AC. Tommy Hughes of Termoneeny RC continued his astounding current streak by finishing ninth overall, third master and first M55 in 33:57.

In an Ulster double, Breege Connolly of City of Derry Spartans finished first woman in 35:19. Making a solid return to racing after a long stretch of injury was Laura Graham of Mourne Runners who was second in 35.40 after pushing the pace in the early stages of the race. A close third in 35:46 was Gemma Rankin of Kilbarchan AC. First W60 was former Dublin Marathon winner Christine Kennedy in 42.10. A total of 2,450 completed the race.

At the Edenderry 10-Mile on Sunday (July 21) Mary Mulhare of Portlaoise AC picked up valuable KIA Series points when she finished first woman in 58:11. Just one place behind her was Siobhan O’Doherty of Borrisokane AC in 58:26. Overall race winner was Paddy Sharkey of Longford AC in 54.39.

A large Irish team at the European U20 Championships in Boras, Sweden (July 18-21) came home with three medals.

Kate O’Connor began the Irish account by taking silver in the heptathlon in the opening days of competition. In a closely fought competition, her score of 6093 made her the first Irish women ever to go over 6000 points and broke her own Irish record.

Highlight of her performance was a personal best throw of 52.92m in the javelin, which puts her second behind many times Irish champion Anita White on the all-time Irish list.

Sarah Healy won silver in a nail-biting women’s 1500m final, taking the lead on the penultimate lap and winding up the pace from there. She led turning for home and just lost out to Switzerland’s Delia Sclabas in the run to the line, the 18-year-old Blackrock athlete claiming a silver medal for Ireland in 4:27.14. Sclabas took gold in 4:25.95.

McElhinney was equally as courageous and no less brilliant in the men’s 5000m final, the Bantry athlete taking the lead with a kilometre to run and pushing the pace out front. He was passed with one lap to run but fought all the way to the finish to come home third in 14:06.05. The race was won by Spain’s Aaron Las Heras in 14:02.76. Jamie Battle came home 14th in the same race in 14:42.37.

Just out of the medals in the 200m races were sprinters Aaron Sexton and Davicia Patterson whe both finished fourth. In the women’s 4x400m, the Irish squad finished fifth in a new Irish U20 record of 3:37.42.

There was Irish interest in the men’s javelin won with a mighty 79.44m throw by Simon Wieland of Switzerland. Wieland is coached by 21 times Irish champion and six times Olympian Terry McHugh, who lives in Lucerne, Switzerland. In Wales on Saturday (July 20, Sarah McCormack won the Snowdon International mountain race for a third time in a superb time of 74:49 – just ten seconds off the women’s course record and a personal best for McCormack by six minutes for this gruelling 10 mile race.

The Irish woman, who is based in England’s Lake District, had to fight hard for her win first passing early race leader Hatti Archer of England and then battling to hold off Italy’s Elisa Sortini, who finished just 22 seconds behind her.

On a great day for the Irish, Zak Hanna of Newcastle AC was fourth overall while Killian Mooney of DSD AC was a fighting 14th. There were strong runs also from Mark Stephens 19th and Conor O’Mahoney 24th and of the women, from Becky Quinn 12th and Sinead Murtagh 18th.

With the National Championships taking place in Santry next weekend, Ciara Mageean continued her excellent season with a season’s best time of 4:03.70 in the 1500m at the Diamond League Anniversary Games in London on Saturday (July 20). Mageean placed eighth in a race won by Scotland’s Laura Muir in 3:58.25. A number of Irish athletes were in Belgium for the Heusden-Zolder Night of Athletics on Saturday (July 20), where Andrew Coscoran of Star of the Sea AC clocked a time of 3:40.79 on his way to victory in one of the 1500m races. That improved on the 3:41.19 Coscoran had run a week earlier in Kortrijk, also in Belgium, which put him top of the current Irish rankings. Behind him, John Travers of Donore Harriers finished eight in 3:44.32.

Irish steeplechase specialists were in the Finnish town of Lapinlahti for the Savo Games on Wednesday (July 17) not too far from Gavle, where the European U23 Championships had taken place a few days earlier. Brian Fay of Raheny Shamrock, who had competed in the steeplechase in Gavle, finished fourth in the 1500m in 3:46.05. In a 5000m women’s race, current Irish women’s steeplechase champion Michele Finn went through 3000m in 9:20.27 before dropping out.

League titles for Clonliffe and DSD

Clonliffe Harriers men’s team successfully defended their national league title after a long day in Tullamore making it a fifth title in a row and a tenth overall since the National League was first held in 1978.

In the women’s competition, Dundrum South Dublin AC were regaining the title they last won in 2016 for an eighth title overall. St Abban’s, who had won for the past two years, were missing their big name athletes and had barely managed to qualify for the final.

DSD performed well across the board with a team mixing the experience of Sinead Denny, Meghan Ryan, Fiona Clinton, Meghan Ryan, and Fiona Clinton with the youth of (among others) Molly Hourihan, Charlotte Burke, Emma Ryan, Rachel Dunne, and Kate Doherty winner of both the 100m hurdles and 100m flat. Then there were club stalwarts Harriette Robinson, Emmy Coffey Nguyen, Sonya McConnon – and club president Lucy Moore who did her bit in the hammer.

Clonliffe dominated the men’s competition with seven wins, starting with Simon Galligan in the hammer.

An impressive second was a new look team from Raheny Shamrock, with winnning performances from Eric Favors, 18.45 in the shot and 48.59 discus, as well as Kieran Kelly in the 1500m and the 4 x 400 team of Brandon Arrey, Jamie Sheridan, Cillian Kirwan and Kieran Kelly.

With the national championships only a week away, there were a number of other eye-catching performances in Tullamore.

Michael Bowler for Wexford County looks well on the way to retaining his pole vault title after soaring over 4.50. In the 400m, Cillin Green of Galway City Harriers was first in 47.75, with Brandon Array of Raheny Shamrock a close second in 47.80. Sharlene Mawdsley, representing Tipperary County, won the women’s 200 in 24.08, while Claire Fitzpatrick for Kerry County showed that she is right back in form after a year’s break from the sport with a winning 50.58 in the discus.

At the annual SIAB Schools International in Swansea, Ireland’s only winner was race walker Matthew Glennon with James Hanlon second. In a thrilling girls’ 300m, Jenna Breen was pipped for gold by Cedelle Agyei-Kyem of England who finished in in 39.73 secs; Breen’s times was 39.74. Other Irish competitors taking silver were Oliver Swinning 10.94 secs in the 100m, Aoibheann McMahon 14.65 for the 3kg shot, Tadhg O Muircheartaigh 61.00 in the 700g javelin, and the girls’ 4×100 and boys’ 4 x 400m relay teams.

Earlier on the roads

Hehir’s time of 19:41 saw him finished well over a minute ahead of Eoin Callaghan from Star of the Sea AC and Karol Cronin of Sportsworld, who finished in 21:08 and 21:15 respectively. Cicchinelli clocked a time of 25:48; finishing second and third women were Andrea McNamara of Sportsworld in 26:09 and Jean Murphy in 27:11. A total of 1,306 finished this popular inner city race which starts and finishes in the scenic surroundings of the Royal Hospital, Kilmainham.

Peter Somba of Dunboyne AC led home 618 finishers at the Bettystown B-5 organised by Cilles AC in Co Meath on Tuesday (July 16).

Somba’s time of 25:37 put him almost a minute clear of Sean Doran from Clonliffe Harriers, who finished in 26:30, with David Rooney of Rhaney Shamrock third in 26:45. First woman was Niamh Devlin of Dundrum South Dublin AC in 29:31. Laura McDonnell of Tallaght AC was second in 29:50 and Aoife Parrella of Star of the Sea AC third in 32:02.

Your timely reminder that parkrun isn’t actually a race, but we know everyone likes to see the top ten times each week so here are your quickest runners from Ireland on Saturday July 20th.

Diamond League action & 5/10k races all over the UK – weekend round-up
British Athletics annouce the European Team Champs Squad, but who will run the 5000m?