Night of 10,000m PBs: women ready to shine in Highgate 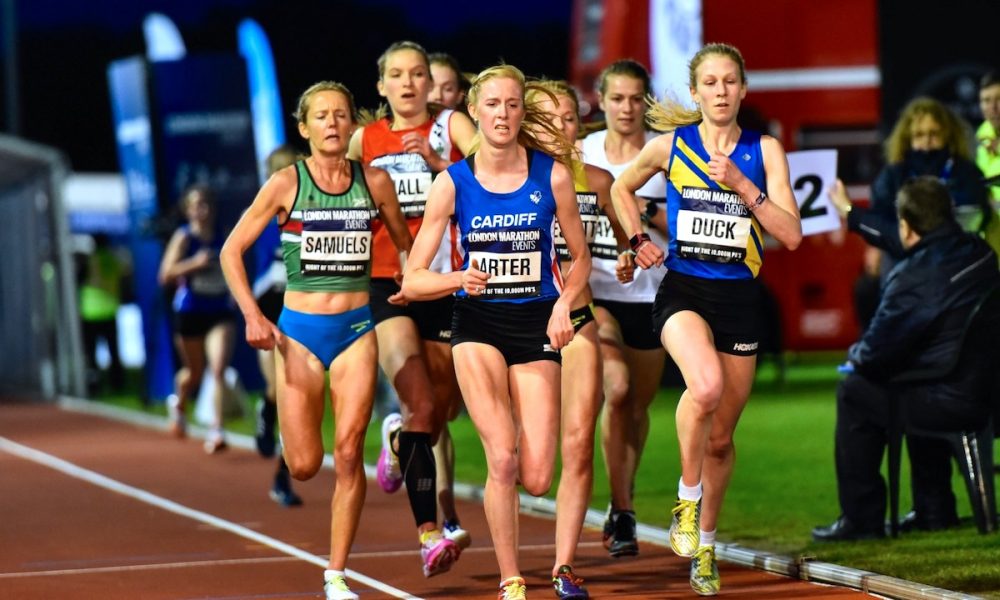 A look ahead to the leading women racing in Highgate this year with the European Cup and GB trials for the European Championships also on the line.

Along with British titles to be contested, this year’s Highgate Harriers’ Night of the 10,000m PBs acts as the GB trials for the European Championships and also incorporates the European Cup.

Leading British men entered include 2017 winner Andy Vernon and club mate Chris Thompson, while 20 year-old Alex Yee makes his hotly anticipated debut over the distance. A detailed preview of the men in action can be found here.

AFD’s Emelia Gorecka will debut over the distance on Saturday but her 15:07.45 5000m PB makes her the fastest in the field for 5k and she is a world-class athlete. Gorecka has enjoyed working with coach and club mate Chris Thompson to build foundations back to full fitness over the last two years, and her two outings over 5k on the road and track this year (16:04 to win the Carlsbad 5000m and 15:30.59 at the Payton Jordan Invitational) point towards the 24 year-old being one of the hot favourites at Highgate.

Havering’s Faye Fullerton will also be running 10,000m for the first time, but, like Gorecka, she is a proven performer on an elite stage, and has been in the form of her life so far this year. A 15:53.69 5000m athlete, she has already represented GB three times this year on the country and over the 13.1m distance at The Big Half and the World Half Marathon Championships, the latter at which she ran a 73:56 PB. Tonbridge’s Ashley Gibson holds a 16:20.65 5000m PB and a 33:30 10k best on the road from last November’s Leeds Abbey Dash, where she placed third in a high class field. Her most recent performance over the distance was at a 10k in Holland, where she ran 34:17 in March.

Shildon’s Kate Avery ran her 31:41.44 10,000m PB in 2015 and it makes her the fastest Brit in the field. And although she only competed once in 2017 at the European Cross Country championship trials in Liverpool, she was back to winning ways at the recent Derby 10k, which she won in 34:38.

Katrina Wootton can boast a 31:45.63 PB and has been a truly classy athlete and consistent performer over 10k for more than a decade, despite still residing in the senior ranks.

Coventry’s Wootton has already raced three times over the distance this year at Chichester, Brighton and Birmingham, posting a 33:22 result at the former. Her 72:49 clocking at February’s Barcelona half marathon was a big PB and proves her strength of endurance. Cardiff’s Charlotte Arter clocked a 32:37.52 PB last August at the Stretford BMC meeting, but she also competed at last year’s Highgate race, where she ran 32:51.72 to finish 6th in a high class field. Holding bests of 15:40.15 and 15:39 for 5k on the track and road respectively secured in the last 12 months, the latter at the Cardiff 5k to take the win, prove she is one of the strongest favourites in form.

Leeds’ Claire Duck with a 32:51.38 PB from last year’s Night of the 10,000m PBs shows she is also a big contender, with the Leeds athlete having proved her form nine times already this year on the country, track and road. Her 15:39.68 5000m PB came just last week at Sportcity’s BMC meet, and, proving her versatility over every track distance, she ran 9:17.41 last month for 3000m, just 10 seconds shy of her best and very early in the season. AFD’s Louise Small’s 32:56.11 PB was also secured at last year’s event, proving the quality of Ben Pochee’s creation. Small has been a consistent top performer for some years now, having spent her whole athletics life with the Aldershot club, and her recent 33:20 10k PB in Poland highlights the fact the young teacher is another one to watch at the sharp end of the race.

Jenny Nesbitt is the youngest of the British elite crop, but her 32:58.14 10,000m PB proves she is just as much a threat for the title as her older rivals. Like Duck, the Worcester athlete has also raced prolifically this year already, most notably at the Gold Coast Commonwealth Games, where she recorded her lifetime best in the biggest race of her career so far.

The talented youngster also ran her fastest ever 10k road time at February’s Bourton 10k, where she posted a 33:24 PB to win. Philippa Bowden’s 33:44.24 PB was another lifetime best to be earned at last year’s Highgate event, but Bowden is a strong athlete on all surfaces, having made impressive progress over the country and on the track in the last 12-18 months.

The AFD athlete finished in the top three at both BUCS championships on country and track, and put in a fine performance at January’s Great Edinburgh cross country international to underline her elite credentials.

Leeds’ Stevie Stockton’s 34:03.88 PB does not highlight just how fast the long time GB athlete has been running this year since returning to top form, with her lifetime best coming back in 2013.

Stockton ran a 15.38 PB to win the recent Mid-Cheshire and England Championships 5k, before posting another PB at last week’s Sportcity BMC 5000m, where she posted a 15:41.11 best to finish second behind Claire Duck.

Edinburgh Uni Hare & Hounds’ Mhairi Maclennan’s 34:39.87 PB came back in 2016 in Portugal, but she has since run faster on the road, her 33:41 best coming in a top class 10k race at Brighton, where she finished 5th. Maclennan also ran a 56:30 10M PB last month to finish runner up at the Scottish Championships.

Bristol & West’s Elsey Davis has been in storming form since taking a more relaxed attitude to training and ditching the marathon (albeit only for now), and her 35:38.48 10,000m PB does not give an accurate indication of her abilities over the distance.

This year she has run a 33:40 road PB to win the Cardiff 10k, along with four further sub-35 minute clockings over 6.2m. Her 16:29 5k PB came when she dominated the Guernsey Easter running festival, and she has also run a 5m lifetime PB this year, her 27:39 best coming at Alsager.

City of Norwich’s Dani Nimmock will be making her debut over 10,000m at Parliament Hill, but she has hit a rich vein of form this year already, winning the Manchester marathon in a 10 minute PB of 2:38:22 just last month. Nimmock ran for England at the recent Lillebaelt half marathon, where she came second, but her 74:13 PB from the earlier Big Half shows her true endurance abilities.

Emma Mitchell and Ann Marie McGlynn both return to Highgate and compete in the A race, while Fionnuala Ross and Shona Heaslip are down to start in the B race. Mitchell will look to further reduce the 32:49.91 personal best and Northern Ireland record she set in finishing 15th at last month’s Commonwealth Games, while McGlynn who ran a top 3 time at the English National Road Relays earlier this year, will aim to improve on her 33:16.73 personal best set in Highgate last year.

Heaslip, has impressed this year, picking up both the Irish cross country and 10k titles and will make debut over the distance on the track. After a recent 34:19 PB on the road to finish second at the Birmingham 10k she will be full of confidence.

Scotland based Ross made a return to the track in April and ran a personal best 34:05.59 in a mixed race at the Scottish 10,000m Championships. The Armagh AC/Shettleston Harriers’ athlete will be full of confidence having made the Irish teams at the European Cross Country Championships and the World Half Marathon Championships in the last few months.

Among the international challenge in London on Saturday night is Germany’s Sabrina Mockenhaupt. The 37 year-old, who is a two-time winner of the European Cup has a PB of 31:14.21 from 2008 and last season her best over the distance was 32:46.37.

France’s Sophie Duarte returns to Highgate after clocking her PB of 32:36.32 at the event in 2014 finishing second to Jo Pavey.

A detailed preview of the men racing at the Night of 10,000m PBs can be found here.

Would you welcome a localised running magazine in your area?
Mo Farah and world record holders set for Manchester