Would you welcome a localised running magazine in your area? 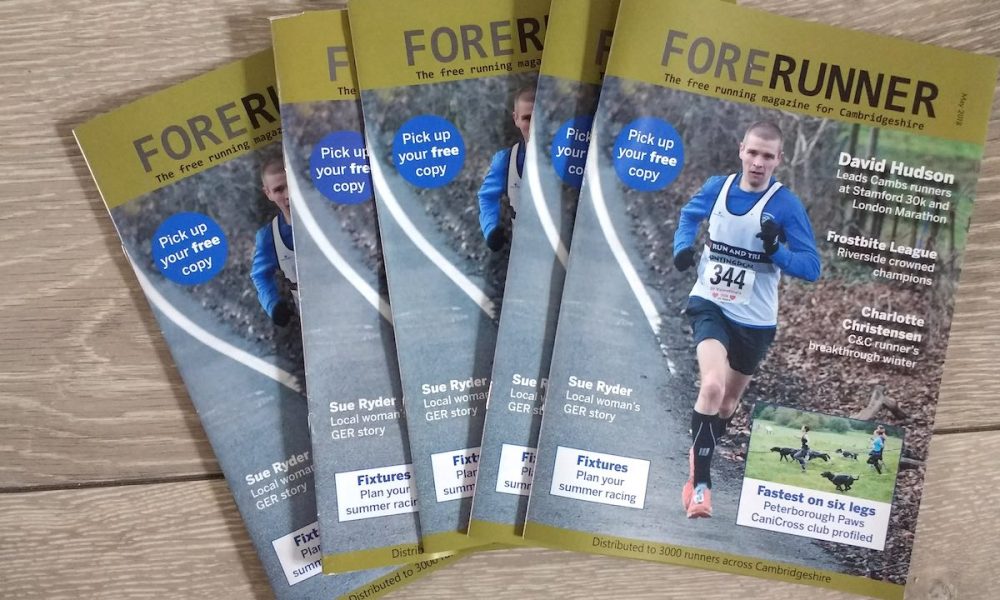 Many say print publications are dying but Paul Halford disagrees and aims to create a new localised running magazine beginning in Cambridgeshire.

About this time last year, I was having a post-parkrun coffee with a clubmate, who suggested there was a niche for a magazine at parkrun events. Some months later, at a time when my freelance journalism work was drying up, I had some time free, so started to work on a publication inspired by that conversation.

Forerunner was to be a locally biased publication, for Cambridgeshire where I live, although the distribution would take place at a number of races and running clubs rather than just at parkruns. The long-term plan would be to have one such publication for each of multiple counties.

With so few local newspapers left and many of those that remain having not enough resources to adequately cover any sports apart from football, local running journalism has been hit hard.

My own local newspaper carries decent athletics news – but only because a local enthusiast writes it for free. If he didn’t, I wonder if they would touch it at all – I think not when I consider that I have never seen anything in the paper on another of my sports, badminton.

For this reason, if you want to be kept up to date with what runners in your local area are doing, it’s not that easy.

One of the complaints I regularly hear about running magazines is that they essentially recycle the same rewritten material over and over again. I don’t agree that it’s the case with all of them, but it’s clearly a widely held opinion. But a locally based running magazine is something different – where you can read about your clubmate or see pictures of your training partner.

Hoards of people are coming into running and a very high percentage of those at parkruns and races are not associated with the club scene. Forerunner, though, provides them with information about the local running scene around them, listing races they wouldn’t otherwise know about and clubs they might be interested in joining.

While the response to the first edition was overwhelmingly positive, it has not been easy. I’ve had to take on all of the jobs – from writing, taking photos, designing and distributing 3000 copies all over my county.

Trying to sell ads has been a major slog too. The paying advertisers are clearly out there somewhere, the second edition made a modest profit and I’ve been grateful that England Athletics were among those supporting the magazine, but it’s the length of time it takes to find the advertisers that is the main issue.

Including also the time and money spent travelling to races at weekends, I daren’t sit down at work out how much per hour I’ve made.

Still, I’ve not given up yet. Along with the second issue, I’ve launched a crowdfunding campaign via Kickstarter and I need to raise £3000 by June 10 – it’s all-or-nothing, so if the target is not met nothing will happen.

However, if it is successful then it would be enough, after paying Kickstarter’s fees and for website and software costs, to cover printing for four issues. Being able to say the magazine will definitely go ahead for four issues will mean I can use an advertising sales executive without worrying about being out of pocket.

Hopefully, over the course of the four issues, too, I will be able to look to set up similar publications for other counties. London is one particular area I have in mind, given there is so much going on there and how people have a close association with the geographical location.

In each location, I would be looking to pay local enthusiasts or juniors on a part-time basis to help with writing, photography and distribution.

Rather than just plugging my crowdfunding campaign, I am hoping this article will inspire some debate. Do we need local running journalism? Is it enough that we have websites and Twitter or do people appreciate something physical in their hands to read?

Paul Halford is a member of Werrington Joggers and a former Welsh marathon champion. Further details about the crowdfunding campaign for Forerunner can be found here.