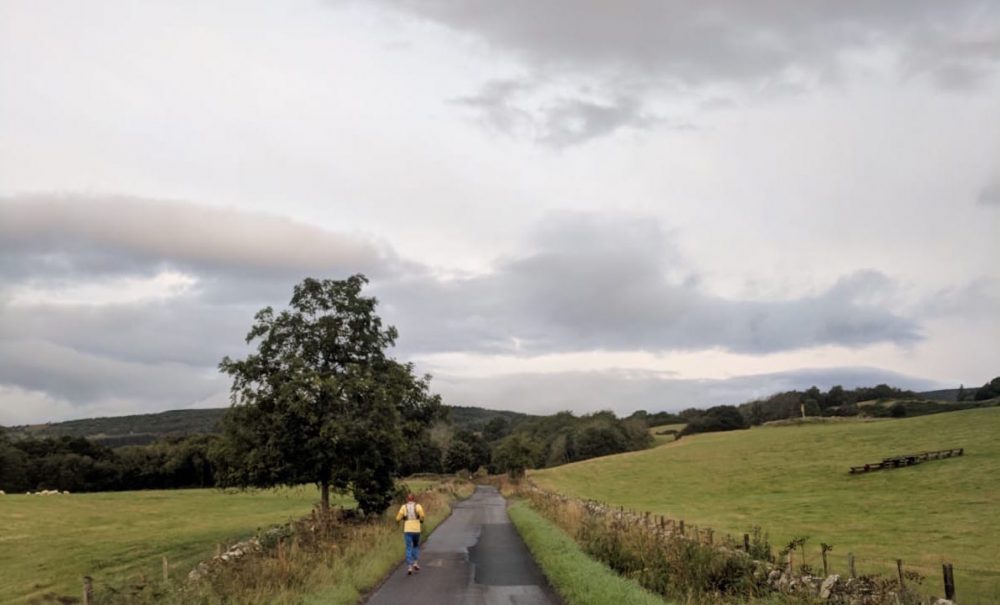 The ultra runner is currently on day three of his mammoth record attempt and needs the help of the UK running community.

Running around 90 miles per day on the side of busy roads, Dan Lawson is making steady ground and is feeling good on his record attempt. The crew had to leave the busy A9 in Scotland as traffic was intense and road users called police about the runner.

“We’re having to stop five or more miles down the road with the support vehicle,” said team member Michael Seymour. “Dan sometimes has to run large sections on his own and it would be great if he had other runners with him.

“Dan has decided to stick on the A9 and there are articulated lorries coming past at 70mph. The more people that can come out and join him will be an encouragement. It’ll perk up Dan and keep him safer on the roads.”

There was one word of warning though from the team.

“We want people to come run with him, but they have to bear in mind that he’s going at a fair pace,” added Seymour. “It’s a record attempt. I tried to keep up for a few miles and it was bloody hard work. We had a local policeman join for 15 miles and it was a solid effort for him.”

“When he stops for the night he’s tired, but every morning Dan’s up at six am and fresh as a daisy,” continued Seymour. “His feet are good and he’s eating well. Right now he’s getting six or seven hours of sleep per night, but we’ve got to keep on pace.

“You start to see the size of the task ahead when an extra five miles at the end of the day is taking away an hour of sleep.”

Sleep will be paramount to success in the challenge. From experience of multi-day runs myself, it is the hours of sleep, as well as the miles covered, that determine how a runner feels the next day. Cut out those quality hours of slumber and it’ll feel like you’ve run another 50 miles the day before.

“We’ve all been learning along the way, the crew and Dan,” said Seymour. “Initially we tried to do a big meal at the end of each day, but now we’re starting that meal in the last couple of hours so Dan can eat it bit by bit and then just climb into the van at the end. Straight to sleep with a full belly.”

Fellow British International 24hr runner James Elson said: “Dan’s made a superb start. There’s still a long way to go, but with his ability he’s able to get increased rest each day whilst still covering the required distance. If he can keep the pace up and recover well between each day, then he can do it.”

Where can you join Dan?

The whole attempt is being tracked by Open Tracking and at any one time, you can see exactly where Lawson is. As the time of writing the British ultra runner is approaching Pitlochry in Scotland and aims to be travelling through Perth and towards Edinburgh today (Wednesday).

The crew have asked that if anyone would like to join Dan to run sections of the record then please do. From experience, the miles can be a lot easier with good (or even bad) company.

Although initially the aim had been to front load the attempt with slightly further finishes each day, the former European 24hr champ is instead averaging 90 miles a day. The light footed runner paced excellently to his victory at the European Champs in 2016 and looks to be doing the same here. Fashion icon Lawson is sporting solely second hand clothing for the record attempt and excitement builds to see what will be worn each day. Who said ultra running isn’t sexy?

Up in the wild norths of Scotland, the attire was colourful leggings, gloves and wooly hats. The slight figure of Lawson could well have been on his way to a trendy London fashion show.

Lawson, who often spends six months at a time training in India, is not known for dealing well with the cold. On a 2017 GB squad training weekend the Scottish contingent were in shorts and vests whilst the southern Lawson was in a full down jacket.

Hopefully, everything warms up as the West Ham fan heads further south and we start to see some summer wear. The athlete’s yellow ‘Team Centurion’ t-shirt is a hand me down from 24hr team mate James Elson.

The second hand clothing is part of the ReRun clothing social enterprise set up by Lawson and his wife Charlotte Jalley to raise awareness of the huge levels of waste within the running industry.

So if you can get out and help Dan then please do. Check when he will be coming past your town, tell your friends and start supporting one of our greatest British athletes.

Already today the team have been met by Scottish ultra running stalwart Adrian Stott. Edinburgh based Stott was actually part of the support staff for Don Ricthie’s record breaking run back in 1989. Fellow 24hr runner and massage therapist Neil MacNicol will be helping prepare Dan’s legs for the next day of running too.

The ultra running family is known for how supportive it can be. The same can be said for the whole of British running culture so let’s prove it this week. If you can help then get out on the road, but even if you can’t run then get out and cheer. Maybe even come help with dinner or the washing for the crew? Mick and Charlotte could probably do with a cuppa.