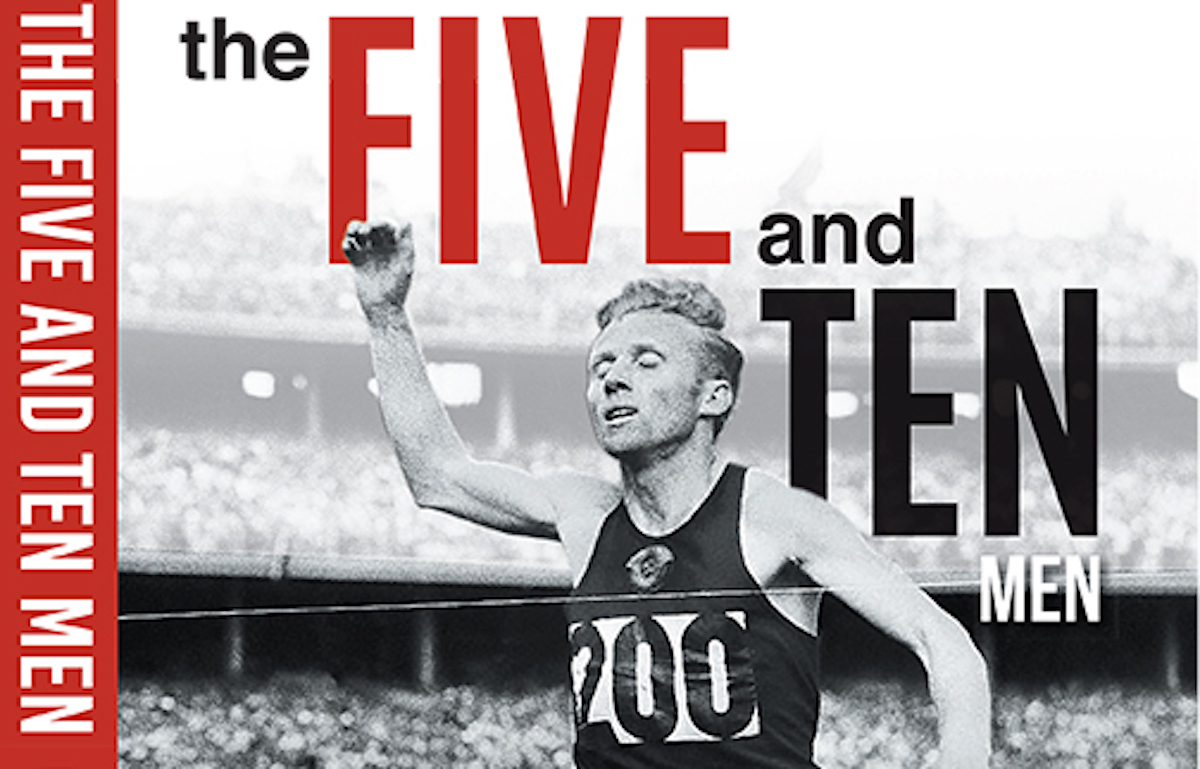 In a handy coincidence of history and decimal metrics the sport offered Amery 10 men who have achieved the rare status of holding both 5000m and 10,000m world records simultaneously, since the distances were standardised in 1912.

Joshua Cheptegei has more recently become the 11th in the series as of autumn 2020. The work was completed in late 2019, when Chinese bats were still largely behaving themselves, so the book’s promotion has been in a largely locked down world hence the delay in this review

The narrative offers a lively opportunity to give a rounded assessment of each athlete’s performance history, their individual traits that made them the person and athlete that they were, and to frame this in the wider picture of their national sporting and social culture. For the reader curious as to why it was Finland, Russia, or Hungary that had their distance legends when they did, Amery digs deep and articulately to tease this out.

The author has a keen eye for the wider historical tides that impact the national and international endurance dynamics. So for instance we learn that the immense, almost total Finnish dominance that lasted fully quarter of a century through to 1939/40 is heavily undermined when it emerges from a grim war with its obviously much larger neighbour Russia. Political choices meant that it was in effect siding with the Nazi Axis and post war financial reparations left it in even worse state than other European nations. It’s no surprise that since Henry Rono’s peak of 1978 all the men featured are from the Rift Valley, and the author has the chance for a geographical spread unlikely for anyone doing a 22nd century update.

Amery also flags up that the decade of Soviet bloc world record dominance coincided with its elite distance runners being all but full time salaried pro athletes within the armed forces, to a degree not matched at that stage by the western world.

Amery traces neatly how the progression of training methods aligns with WR advances as the best talents tap into evolving best practice. So, whilst Emil Zatopek was undoubtedly breaking new ground with his massive training load from the late 1940s, he in turn was surpassed in the mid to late 1950s by coaches of athletes who finessed his approach, realised that more wasn’t always better and reined in the volume but added greater zip to their reps. This points to how the gradual opening of global communications led to speedier spreading of training advances. One reason for the longevity of the Finnish dominance was that their training secrets could indeed remain relatively secret in the previous generation.

Ron Clarke was the one who by hacking major chunks off the previous marks in 1965 brought the records in line with what we might, at a pinch, call world class today. Interestingly the author was raised in Australia at a time when Clarke’s record was still current as coincidentally was Derek Clayton’s long standing marathon world best from 1969 so it is fitting that an Australian has chronicled this particular story of human advancement.

Amery insightfully digs out the very first East African runners to make any international headway, back in the mid 1950s, with the 1968 Mexico City Olympics perhaps being a step change for Kenya in particular. With hindsight it is almost surprising that it was a good 20 years before they and Ethiopia came to the level of dominance they have assumed since, in male endurance.

The one obvious outlier in relative anonymity amidst the hugely renowned legends is that of Finn Taisto Maki, whose dual records also made him the first person to break 30 minutes for 10k. He did this on 17 September 1939, which coming just two weeks after WW2 started, resulted in his “notional ” golden Olympic Games being cancelled.

To his credit (as an Australian) Amery does a fine job of spelling out the European Championships endurance history. Started in 1934 just as the continent was heading towards troubled times, until the late 1970s Europe was by far the major player in global endurance so its Area championships were truly indicators of the global balance of athletics power.

For this reader, the pre-elite and post-retirement parts of the narratives were at least as interesting as the details of the World Record and major championship races, which in several cases are well known to those steeped in the sport. There are at least a couple of very sad declines for great runners who found very little to give joy and meaning to their life once their golden ere had passed – notably Vladimir Kuts, with sad and early and lonely deaths behind the old Iron Curtain.

Clearly all had immense talent and the junior development systems have varied somewhat over history and across nations though it is notable that there is no single pattern on how these men emerged as younger athletes. Zatopek was a very late starter, Bekele was clearly stellar even by Ethiopian standards from an early age, Viren was initially good but not great and was a top year Under 20 before really emerging – and 3 years later won his first Olympic double.

Amery picks out some relatively unknown nuggets to fill out the profiles. So whilst Lasse Viren’s 1976 exploits are well known – double Olympic gold again and an impressive 5th in his marathon debut just 20 hours after the 5k final, perhaps the freakiest footnote is that just 4 days after the marathon he knocked out an 8.21 2 miles (about 7.47 3000m) in the USA. Don’t try this at home.

From a British point of view, we have not been short of our own barrier breakers over the century, the likes of Dave Bedford, Dave Moorcroft, Gordon Pirie and Chris Chataway all notching up WRs at “only” one event. And Mo Farah sits remarkably high once the many altitude raised runners, known dopers and Moroccans are filtered out.

Whilst not having the slightest doubt about Haile Gebreselassie’s ethical bona fides, he was involved in a remarkable trading of mind boggling WRs with others in the mid-to-late 1990s (and the timeline for the 1500 is similar) which, (Bekele aside, with no close rivals at his peak) coincidentally petered out for fully 20 years after the introduction of EPO tests from 2001, and it took new shoe technology and pacing lights before the 5 and 10k made the next small advances. Makes you wonder. The argument about prodigious endurance men moving quickly to the marathon before testing their potential over the track distances is not a 20 year trend and not, in this reader’s eyes, a full explanation.

There are other tales beneath the headlines that amaze. So one reads of Henry Rono’s jaw dropping 1978 season. Mixed with the 5 and 10 WRs are additional world records at 3000 flat and steeplechase, the latter at 8.05 still truly world class to this day; 52 races (50 of them in 10 months) nearly all against top class opposition, a global travel itinerary that was tough enough even without the races, and all whilst trying to keep a lid on his destructive boozing tendencies. We are told how in May 1981 a bemused Steve Cram is asked by the then heavily overweight and under trained Rono to pace him to a world record that season. The Kenyan lost weight and gained fitness at such and extraordinary rate that the deal is indeed sealed, with Rono logging a 5k WR 13.06 by mid-September.

Or that Haile G holds a world record in world record setting, so to speak, in setting world records over a time span of over 14 years. Or that as late as 1994 he set an Ethiopian 1500m record of a mere 3.37; think how far down the UK rankings that would have slotted in by that date. He was truly one of a kind, and the length of his chapter largely reflects the huge longevity of his world beating prowess. He is a notable contrast to Rono and the much cannier race selection, both on a career-long and seasonal basis, offers some valuable lessons.

Amery’s prose is always crisp, avoiding the clinical approach that can creep into content that has data at its heart, and he has a smart understanding of which numbers are the most interesting to flag up. Also notable is that though the book is self-published and apparently not externally edited, the physical heft of the volume is top quality as is all the formatting and photo placing. The author (who incidentally is very modest about his own running days, which included a 2.30 marathon to win the South Australia State Championship) is convinced this his first foray into book writing will be his last but he’s certainly offered a super debut to the running world which would be an excellent addition to the reading list of any serious runner, coach or fan.

David Chalfen is a coach at Serpentine RC and http://runcoach1to1.com/