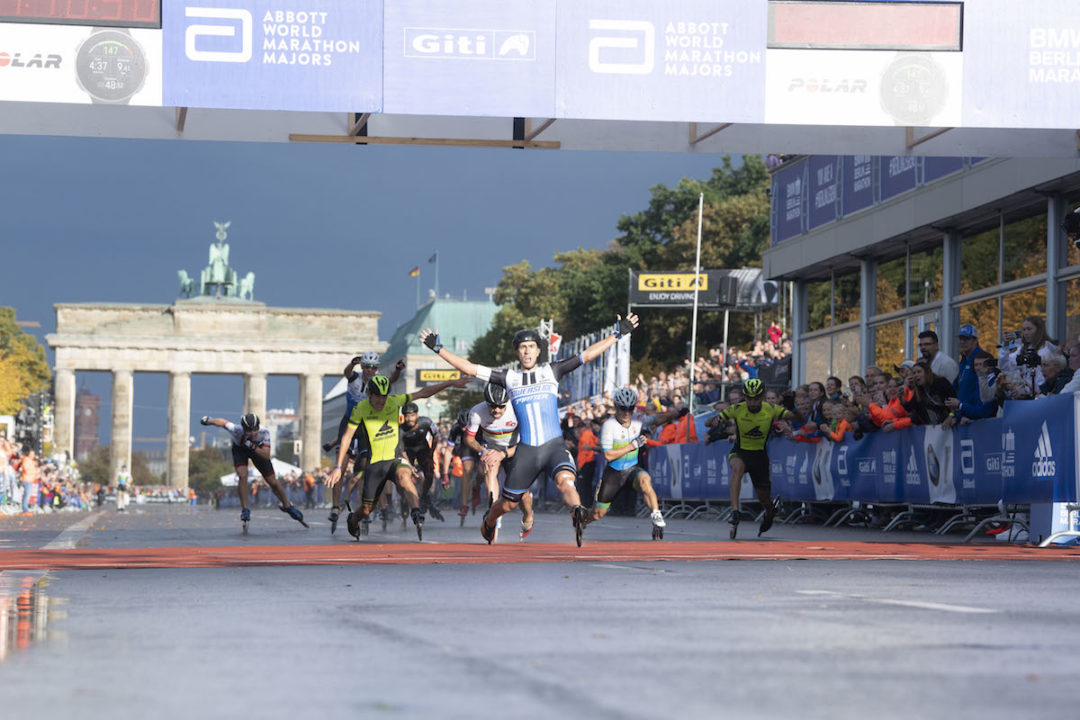 Professional Twitter contrarian and 2:12 marathoner* Ally Beaven has got the wheels to finish way quicker than most at Berlin marathon.

The Berlin Marathon is a big deal. 47,000 runners, a glittering elite field and consistent world best times. Some may be drawn to the Ye Olde charm of Boston, but there is no doubt that in global road running Berlin is The Big Show.

Because the previous afternoon a different group nervously twitched behind that same start line. Not quite the gargantuan hoarde which lines up on the Sunday but, at 5,000 people, a considerable crowd nonetheless. In almost every respect the two events are the same; the same organisers, the same headline sponsors, the same pints of alcohol free Erdinger at the finish. All but 7 of the their 42.195 kilometres are identical.

The only significant difference is that those racing on the Saturday are wearing rollerblades.

This past Saturday I was one of those with wheels on their feet. My debut roller marathon marked the end of a twelve year haiatus from the sport, having spent god knows how many hours of my teens jumping down stairs, mucking up benches and walls with liberal applications of candle wax and being chased out of the Eastgate Shopping Centre in Inverness while trying to buy sweets. The author looking like a ‘pro”. He did ask if we could use the word “bell-end” on Fast Running. Photo: John Kelly

Not quite your youth offender skaters

Looking around, I found little in common between those I was skating with in Berlin and those with whom I’d terrorised innocent highland security guards. This new lot, though not all outwardly athletic, were clearly dressed for an activity which differed from the one I had been used to.

Aero helmets and skin suits were in. Wallet chains and Linkin Park t-shirts were notable only by their absence.

Even accounting for the sad lack of metal band t-shirts, anyone who, given the option, opts to run the Berlin Marathon, rather than skate it, is an idiot.

Why the skate marathon is better

Before they’ve even tied their laces on the first day of training, the skaters have a much better deal. Runners taking their chances in the lottery must get their entry in in October and stand around a 1 in 11 chance of getting in.

By contrast, my inline skate marathon entry went in one morning in June while as I sat in bed with a cup of tea. In half an hour we’d sorted race entries, travel and accommodation.

No waiting around, no uncertainty, no I got in but my wife didn’t, and no need to tweet that it’s the  47th straight year you didn’t get in and the lottery is clearly rigged!

The runner’s entry stress is mirrored by their race day experience. A 6am alarm to eat whatever miserable high carb gruel they think will help their performance, followed by hours spent cheek by jowel with 50,000 similarly misguided “athletes” in Vaporflys, getting hearty lungfuls of deep heat and body odour and agonizing over whether it’s worth the trauma to make a last minute dash to the portaloo.

By the time they finally crawl across the startline some time before 10, the carbohydrate you got out of bed for four hours earlier has come and gone.

Time for a lie in

The skaters, by contrast, don’t start until 3:30 in the afternoon. A lie in, a relaxed stroll round an art gallery, a boozy lunch in an unbearably cool Berlin cafe; these are the race day rituals of an inline skater.

There’s ample space to sit and put your skates on, the queues for the toilet are mercifully short, and dropping your drop bag takes mere moments. In fact, the worst part of the skate marathon, at least for those languishing in the final start wave, is having to hear the same 60 seconds of AC/DC’s Hells Bells 8 times.

Eight tiny, inevitable disappointments that they haven’t slipped in one For Whom the Bell Tolls.

Skating through Berlin is a joy. Try rollerblading the course of any UK marathon and at best you’ll need a few new fillings. At worst extensive skin grafts and a couple of plaster casts. Rolling through Berlin is like skating on a snooker table. Floating on air in your finest silk slippers.

And even on the occasions when tram lines distrupt this frictionless reverie, all you can think is I bet those form part of a well integrated, affordable public transport system. Famous landmarks whizz by and then, before you know it, you’re done.

A skater will finish in around half the time of a similarly competent runner. (Bart Swings 56:49 course record comes out just shy of 45kph).

And then off, into the continental evening to find another hip and happening eatery in which to knock back pints of hefeweizen and trade tales of glory. Even with the later start time, the skaters are two pints to the good before the runners, wincing and clutching at cramping quads, have even made it downstairs into the s-bahn station. Idiots.

*Ally Beaven is a Scottish hill runner who loves long and technical ultra distance mountain races and reckons he could go under two hours for a marathon, but it would all be down to his special shoes. If you feel like more dry humour, inline skating and hill running is a mix you need, follow Ally on Twitter.