The Power of 10 for Finlay Wild 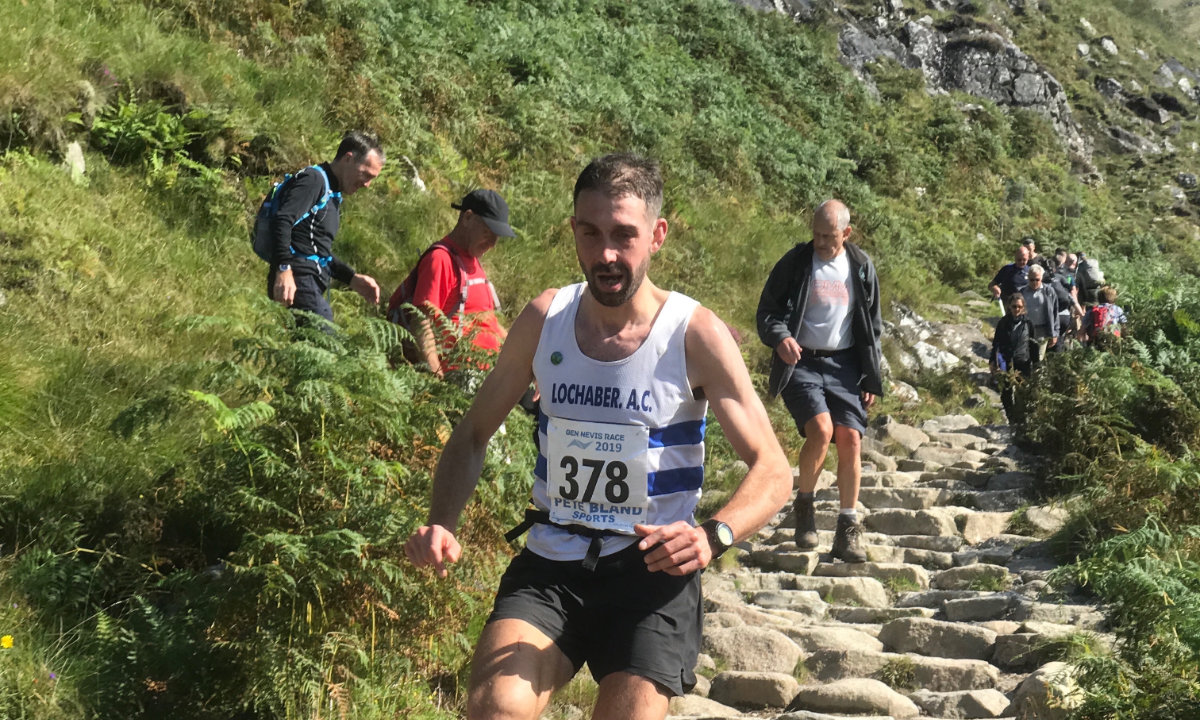 Finlay Wild, 35, has won the MacFarlane Cup and the accompanying Gold Medal awarded to the first place finisher at the annual race to the summit of the UK’s highest mountain every year since 2010.

This year, he led from gun to tape, finishing almost eight minutes ahead of his nearest rival, Lochaber AC clubmate John Yells, maintaining a winning streak unprecedented in such a major British hill or fell running race.

The race starts on the playing fields of Claggan Park, on the outskirts of Fort William, and runners climb from virtually sea level to the 1,345-metre summit of Ben Nevis, before descending to the starting field, covering a total distance of around nine miles. The race is known for its unrelenting steepness – from Red Burn, the last mile-and-a-half to the top climbs at an average gradient of almost 30 per cent over bare rock and scree.

The absence of any shelter and the altitude also means that runners are crudely exposed to the elements. William Kilgour, who witnessed the first recorded speed attempt on the Ben in 1895 by William Swann, noted that such feats were in ‘opposition to the laws of nature’.

But Wild has made a career out of opposing the laws of nature. His first win, in 2010, saw him overcome a then 18-year-old Robbie Simpson and six-time winner Ian Holmes; in 2014, having been five minutes behind four-time champion Rob Jebb, Wild overhauled him, winning by 14 seconds; in 2018, he ran a personal best – finishing two minutes shy of Kenny Stuart’s seemingly untouchable 1985 record, with the cream of English fell runners trailing in his wake.

Running from the front has become a hallmark of Wild’s assaults on the Ben – and so it was this year. In warm, sunny conditions, he led 500 runners up the tourist track and was first to the summit.

On the descent, Wild had to negotiate ascending runners, as well as tourists enticed by the weather, and suffered a small fall. ‘It didn’t cause any problems, but probably made me subconsciously take it just slightly more steadily,’ he said. ‘On the descent l knew I had a big lead but wasn’t on for a personal best, so I just focused on getting the win rather than taking risks.’ A family affair with deeper meaning

Wild’s motivation for the race is partly inspired by a family connection. His mother, father and grandfather have all competed in the race, and, living in Fort William, he has spent many hours running and climbing on Ben Nevis and its surrounding mountains.

Ben Nevis is also the epitome of hill racing in Scotland. ‘It is a classic, old school race,’ Wild explains. ‘It is simple but tough. There is no hype. It is just 500 folk with shoes and bum bags, up and down Britain’s highest mountain.’

He continues: ‘Ten in a row feels weird. I never dreamt of winning even once when I pitched up to run my first Ben in 2006 aged 21. I was 13th. I lost my 20-year-old brother Alex to suicide that year and was dealing with a lot of raw emotion and sadness. I remember thinking a lot about him during the run – a misty, adventurous challenge – what he would have thought or said about it. Ten has crept up on me. I’ve been lucky not to be too injured or ill any of the years. Photo: Pete Bland Sports (who have a cracking website if you need any fell/trail running gear)

“Ten is just a number”

‘Ten is just a number. It’s a nice round number and maybe more memorable than nine, but it’s not really why I run or race. I don’t think anyone sets out to win a race a specific number of times; it’s just something that happens gradually if everything aligns right each year.

‘And, of course, the obvious certainty is that the winning streak will end sooner or later – that’s inevitable. But I don’t think the competitive fight will disappear just because I’ve reached ten!’

Jonny Muir is the author of The Mountains are Calling: Running in the High Places of Scotland. It should be available at any book store that’s really worth it’s salt.