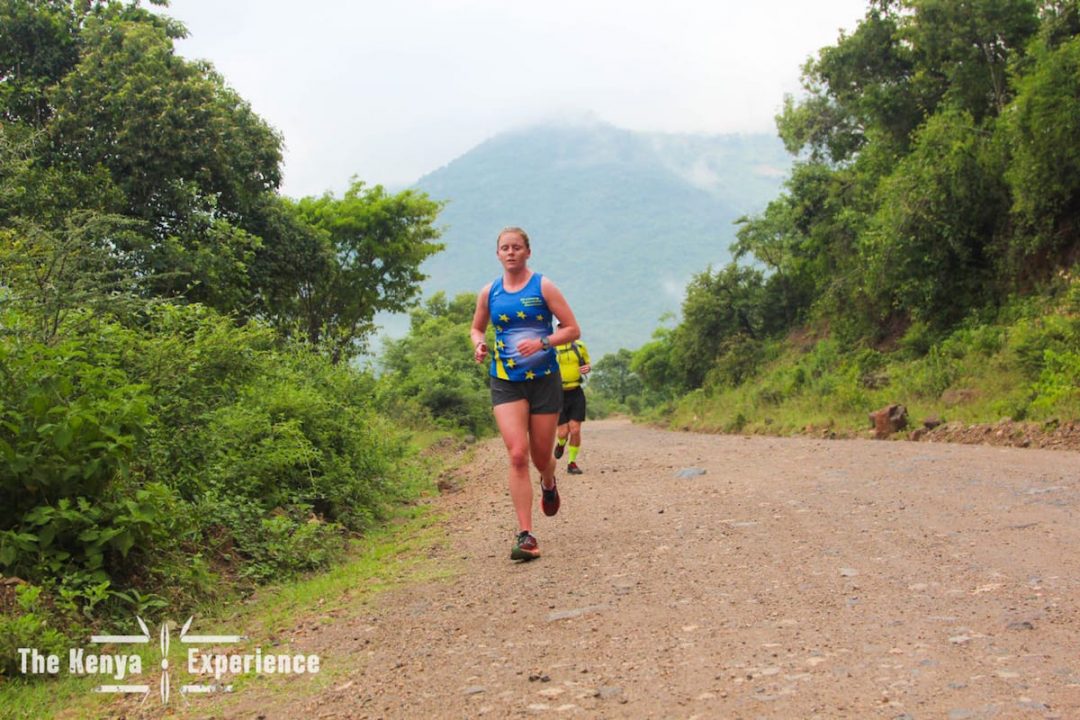 Fast Running writer Bláithín Shiel is currently out in Kenya, training in the home of champions Iten. In her first dispatch back home, the middle distance runner reflects on her love-hate relationship with hills.

Today was the second time in my life that I cried after a run. Both times involved hills.

The alarm went off at 4.50am and I asked myself why I was awake 90 minutes before the sun rose.

We bundled into two people carriers and drove down the Rift Valley of Kenya in the fog, eating a breakfast of a banana and a chunk of bread and trying to keep the nerves under control. I couldn’t sleep the night before. My body knew something big was coming.

I first heard about the Fluorspar run in the book “Running with the Kenyans” by Adaranand Finn. It was as challenging as he depicted and more. Reading his book, I imagined summiting this massive mountain after climbing 4000ft and arriving into the beaming sun. I imagined feeling euphoric, proud, fit, invincible, and part Kenyan.

My experience was not quite what I imagined.

In Kenya, there is no time to warm up or activate your glutes before you run. You meet at 6.30am and are running at 6.31am. For long runs, where you usually rent a van with a driver to shuttle and crew for you, the van arrives, you hop out and a few minutes later you are trotting along at that classic “Kenyan pace” as you warm into the run.

Before coming to visit Iten, I had run with a Kenyan that many Irish readers will know, Freddy Keron Sittuk. He comes to Ireland to race the roads. On the few occasions that we met for an easy run in St Anne’s Park, Raheny, I was always amazed at how handy he was taking it. Take it easy Blá, easy easy. Slow down. Pole pole.

To get to the start of the dirt track, we traversed a very rural part of the Rift Valley. This journey saw us pass entire families with young children walking at 7am with water containers towards a river that passed over the road that we would then drive across. The Fluorspar is a mining area, with warning signs posted on every road bend. Also at every bend were small dwellings and shops made of wood.

As we passed by all these people, some stared with curiosity at the cars full of muzungos, others waved, and the kids shouted “how are you”. The gatekeepers looked on as we set off up an unassuming hill. This looks grand, I said to the two guys beside me. It did not look too steep. I momentarily forgot that it was 13 miles long. Slow and steady and I will make it to the top. It has been five years since I ran for 13 miles, but for some reason I thought that today was going to be the day that I found a hidden talent for running up hills without oxygen.

Fast forward 10 minutes and only one mile later, I was rethinking my goals. I thought 10 miles would be an amazing day and at the very least I would do eight. Given that 10 minute miles makes mental maths very easy, I quickly realised that if this pace was hard after one mile, it was only going to get harder for 10. At the current pace, where my heart rate was firmly in the threshold zone, even six miles would essentially be a one hour uphill tempo, such was the effort. I was exhausted.

The baseline elevation was 1,000m which peaked at 2,800m. Check out the graph of the incline above to see what it looked like. The thing about this hill is, it was not super steep. My legs were not hurting. I ran easy again that afternoon.

The challenges were two fold. Firstly there was no let up, at no point did the surface even out for a few metres, you were never going anywhere but upwards, and if you stopped, you would be going backwards. Secondly, while there is not a whole lot of oxygen at 1,000m, the higher you went, the more tired you became and the less oxygen there was.

The most impressive things I saw that day were two of the guys who actually managed to negative split it, and one of the girls who was first up in 1 hour 59 minutes. Kipchoge who trains across the hill in Kaptagat still hasn’t broken two hours for the Marathon, but Shona McCulloch (University of Washington) broke two for the Fluorspar 13 miler.

Hills so high your ears pop

Somewhere along the way my ears started to pop and the self doubt flooded in. I was on my own for most of it and I was fully accountable to only myself. I would only be letting myself down if I gave up. I wanted to go home satisfied with the effort, but also had to realise that my talents were not endless.

Nobody was in sight and the support car was not within hearing distance. There was no coach to make a call for me, no teammates to cheer me on from the car, and no fellow sufferers to suffer with. I had to decide what to do. I soon came upon Danny, who was having a rough few miles and we ran together for a bit. He went on to complete the entire run, but during that period it felt really good to know that I was not suffering alone.

As an athlete, I find I can rely on my mental toughness to grind it out when my fitness lets me down. I have finished many races in a terrible way but quitting was never an option. Today my mental resolve was challenged to another degree.

At 25 minutes I said to myself that I could do 60 minutes. Anything less than a six mile run would have been an unsuccessful day. It was far from what I wanted, but I had to be realistic. A part of me also hoped that I was just going through a rough patch and things would get more manageable with time. I ticked off the miles 10 minutes at a time as the hour dragged on. At 61 minutes, I was barely standing and called it a day.

It felt nice to breathe again. I hopped into the crew van soon after, a bit high from the buzz of it. But as we continued to climb and crew for the others, the realisation set in that I didn’t even complete half of the hill. I came down and didn’t quite know what I was feeling. Reflecting hard on my effort

It was not the euphoria and sense of accomplishment that I imagined when I read Finn’s account of this legendary run, where champions are made. I did not feel like a champion. Something was niggling at me The rest of the gang were amazing. I was so impressed by the displays of athleticism and generally draw a lot of happiness from seeing other people around me run well.

It wasn’t until I got in the shower that a little tear came out. I don’t know if it was disappointment at not finishing, relief that I survived it, or the culmination of the emotional effort it took me to keep running and the dark place I went to in my head for that hour.

It was not a disaster of a run. I worked very hard and gained something, but I have never not completed a session or long run before. I did not achieve my Plan A, Plan B or Plan C. Today was a plan D day.

Was it the right decision?

I was apprehensive about doing this run because I was not sure I could run 13 miles on the flat let alone up to the sky. Another resident at the camp told me I would be crazy not to take the opportunity, that I would gain more from the Fluorspar than any long run or session.

That afternoon as I set out for another three miles to try run off some of the mixed emotions and make sense of them, I wondered had I made the right decision to do it. I only ran for one hour, only six miles, and missed a long run in my short and somewhat hurried build up for a last minute half marathon in September.

A few days later, as I write this in reflection, and prepare for my last few days at altitude before returning to the real world of runmutes and no naps, I realise that I went to a place in my head that I have never been before. I have never before had to will myself through, or talk such talk, to get myself up that hill.

Six miles up is better than no miles up, and hopefully the next time I am really hurting in a race, I can remember the time I ran a tempo at 10 minute mile pace up a hill, that almost, but did not quite, kill me.

Don’t let your expectations run too far ahead
The Fast Running guide to….Vilamoura