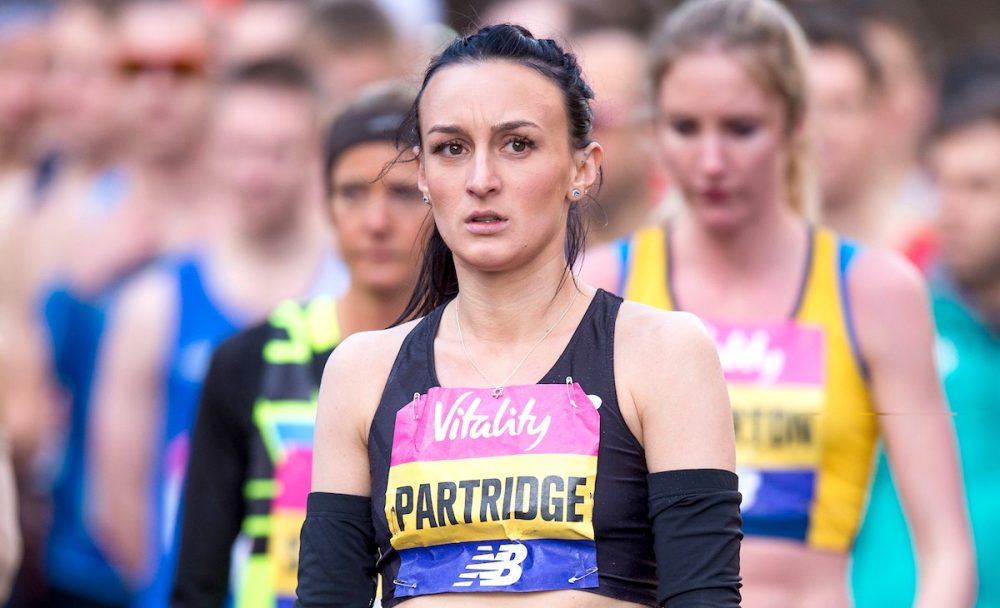 The Aldershot runner aims to prove that turning to the marathon early in her running career was the correct decision.

Lily Partridge was 25 years-old when she ran a superb marathon debut 2:32:10 in Seville at the beginning of last year. It was the 11th quickest debut by a British female and put her 30th on the UK all-time list.

She made her second appearance over the distance in Berlin last September, only to leave the German capital with the letters no athlete wants to see next their name – DNF.

Now seven months on from that race, that was memorable for all the wrong reasons, she is determined to show in London on Sunday that her name warrants inclusion when we talk about of the future of British marathon running.

“What happened in Berlin is my single main motivation for London,” Partridge tells Fast Running. “I said straight after it that I need to be ready to go for my next one because that cannot happen again.

“I learnt a lot in Berlin – it was a tough lesson, but maybe it was a good thing I experienced it.”

Despite injury disrupting her preparation in the months before her second marathon, she was undeterred and made every effort to make the start line, when others may have written it off.

It was a gutsy decision from the Alan Storey coached runner who was hoping to earn the qualification mark for the Commonwealth Games, but it wasn’t a fairy-tale ending – this is marathon running and as we saw with Callum Hawkins on the Gold Coast, it truly is the unforgiving distance.

“Before Berlin, I was coming off an injury that meant I missed most of the summer,” she recalls. “Then when the physio said I could finally run, I effectively flew out to Font Romeu the same week to give myself the best opportunity of getting to Berlin as it was the last opportunity for Commonwealth Games selection.

“I arrived in Font Romeu and was only able to run for three minutes at a time. Then 12 weeks out from Berlin I was up to running a five-mile tempo at six min/mile pace. By the time I left, I had completed a 75-mile week, but I was just running out of time to log the work I needed, but I had to give it a go.

“When people asked me what I wanted to run in Berlin I said 2:28:00 because I knew that’s what I needed to guarantee Commonwealth selection. However, deep down I knew I would have to run out of my skin to achieve that because I just hadn’t been able to do enough work.

“I was so nervous the night before, which is unusual for me and the race itself was just hard from the start, the weather was miserable and at 10 miles I just felt flat, but it wasn’t until 25km that I knew I had to make a decision whether to finish or not as I wasn’t going to run inside 2:30:00.

“So in the end, I made the difficult decision to stop mid-race and it was devastating sat at the side of the road in a foil blanket knowing that with another month or so of training I could have had a better shot at it.”

One of the rising stars of British marathoning

While Berlin was an experience she may wish never happened, it could provide the fuel needed to go on and accomplish great things in the marathon, a distance that is increasingly capturing the imagination of Britain’s young athletes. Partridge is one of these young athletes who has turned to the marathon early in their career, and along with the likes of Charlotte Purdue, Callum Hawkins and Dewi Griffiths, they have helped promote the distance and highlight it as a worthy alternative route to international stardom for young runners.

While many will continue into their late 20s and early 30s trying to achieve the dream of a major championships on the track with little or no indication of success, before the roads become their main priority, the decisions by this young group, and others, has shown that you can make that bold decision to go on a different path instead of adhering to the traditional norm.

“I’m now 27 years old, and I have over 10 years international experience and I’m not going to win a medal on the track,” she explains. “I’m not quick enough over the final few laps and I can beat myself up about it and go on aimlessly trying to change that year after year, or I can focus on the marathon now, and not miss the boat with it.

“I think you have to make that decision, and I don’t think you can wait, but also if done correctly, I believe it will help my 10k times too.

“I believe if you can get down to 2.24:00 or quicker in the marathon you can win a medal at a major championship. That requires good 10k speed but it doesn’t require me needing to run a low 60 something seconds last lap.”

The defining moment when Partridge shifted her focus to the road, came in 2015, when two weeks after her 25th birthday she clocked a personal best 70:31 in the Reading half marathon. It put her 11th on the UK all-time list and is still the quickest she has run over the distance.

“When I ran my PB it shifted my focus towards the roads which inevitably resulted in me making the move to the marathon,” says the daughter of Richard and Ruth Partridge (nee Smeeth). “I’ve always been fascinated with the distance. I read all the books and I read lots of articles even before I thought about taking one on.”

“Since then I have really come to learn about what works for me and I’ve grown in confidence because of it. I love everything about the marathon. The focused build up, the routine and then the race itself (although I’ve only experienced this once).”

The road to London

After the disappointment of Berlin, Partridge had a confidence boosting run at the Great South Run in October, clocking 55:37 over the 10-mile Portsmouth course, and only lost out to Gemma Steel in the final mile of the race.

A successful cross country season followed, including a gold team meal for GB at the European Cross Country Championships, finishing 15th individually overall despite dealing with the challenge of running in one shoe for a big part of the race. “After Berlin, I struggled with illness, so we abandoned another marathon attempt and just said we would go back to basics and do something I enjoy without the pressure, and the Europeans was a good motivator to get back into things and keep focused,” she says. “However, on the day I had some misfortune. I had an ankle injury so I wore a support, but what I didn’t realise was when I put a sock over the top it slipped around in my spike. By the time I realised this, it was too late and the race had started and the shoe just slipped right off after 2-3km.

“I didn’t want to run the whole race with one shoe because of my bad ankle so I tried to keep it on until about 3km to go when I just threw it off and tried not to think of the consequences because I knew I was losing too many places trying to hold it on.”

What followed that determined run over the country was a return to the Spanish city of her maiden 26.2 miler. This time it was for the half marathon and she delivered with a 71:06 course record run, her best time since 2015.

This led to the British showdown at the Big Half, London’s new half marathon event, in March. She went up against her rival in the British ranks and Aldershot club mate Purdue, and the experienced Aly Dixon and Sonia Samuels.

Partridge and Purdue took the race from the start and it was a battle between the two with Purdue, who misses the London Marathon through injury, coming out on the top with a big PB performance. “I was disappointed to lose the Big Half as I wanted the win it and the British title,” says Partridge. “But the performance and the race I was happy with as it backed up my run in Seville – despite being in the middle of marathon training – so it was a good run in hindsight.

“Charlotte was just the better athlete on the day and she was super strong over the final few miles. But the race has given me confidence that I’m in good shape ahead of the London Marathon.”

Following that 70:06 performance in March, it was off to Murcia in Spain for the final preparations for London and Partridge is in a buoyant mood after her time in the sun. Compared to her last marathon build-up there was no panic about mileage or hitting a certain pace in a tempo run just to make the start line.

“I’m really happy with how it’s gone and I can’t wait for Sunday,” she says positively. “I want a big PB that’s for sure, and I would like to try and get into the top 10 overall, but I am just going to focus on executing my race as best I can.”

London is not just about a fast run or a top 10 spot or winning the battle among the Brits with Tracy Barlow and debutant Rebecca Murray. It also has the potential to be a defining moment in this young marathoner’s future, who includes the Tokyo Olympics in 2020 and championship medals on her list of ambitions.

“I don’t want to put a limit on what I can as you don’t know where it’s going to take you,” she says. “But in the future I think can run a low 2:20 marathon, but more importantly I would like a medal at a major championship.”

A top two spot among the British runners on Sunday, along with a sub 2:36:00 run, would secure automatic selection for the GB team heading to the European Championships in August. This would be her first GB vest on the roads and a considerable step towards challenging for a major championship medal in the marathon.

To finish Partridge has words of wisdom for the young aspiring marathoners: “Trust yourself and be open to learning. Everyone has a way of doing things and sometimes it won’t suit you and that’s okay.”