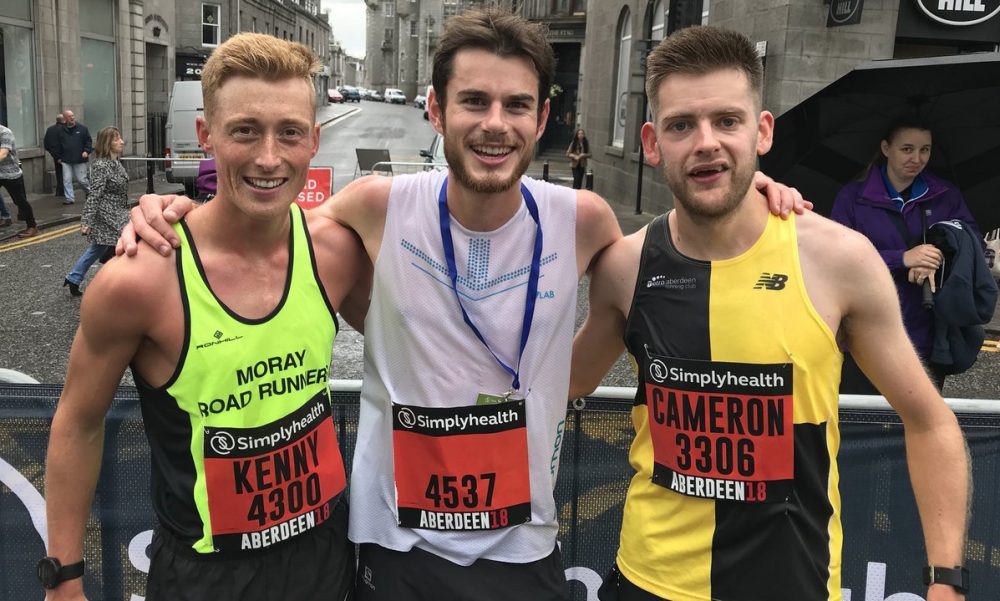 Commonwealth bronze medallist among winners in Aberdeen and runners impress in Berneray, Lancaster, Guernsey and Carlisle.

International marathon runner Robbie Simpson sharpened up perfectly for his next mountain racing challenge with an impressive victory in the Simplyhealth Great Aberdeen Run 10k (August 26).

The Commonwealth Games marathon bronze medallist is preparing for another mountain race – the Jungfrau marathon in September – after spending the last few months racing on the Swiss circuit.

However, the Deeside Runner ran solo for much of the race, eventually finishing nearly a minute and a half ahead of his nearest rival, Moray’s Kenny Wilson.

Wilson recorded a 31:27 result for second. This was in itself more than a minute ahead of third placed Cameron Strachan from Metro Aberdeen.

Regardless, Strachan’s 32:34 was a well earned PB, so a great performance for the Aberdeen University student.

Strachan’s club mate Virginie Barrand went two places better when she won the women’s race overall in a fast 36:38. This represents a season’s best for the French athlete.

Metro Aberdeen excelled by filling the women’s podium, with Kayleigh Jarrett and Claire Bruce taking second and third in 36:50 and 37:19 respectively.

It was another classy affair of racing in the Aberdeen half marathon.

64:58 athlete Kris Jones won by a country mile (almost literally at this pace!) with a superb 66:35 time in victory. Metro Aberdeen’s Kyle Greig scored a season’s best with a 71:23 result for second.  Stonehaven’s Jason Kelly’s 72:20 was a PB in third.

Fife athletes made up two of the top three female finishers. The club’s Sheena Logan took the win in 81:56 and her club mate Jen Cruickshanks was third in 86:28. Durham’s Katie Iliffe split the pair of speedy Fife women, finishing second in a PB of 85:24.

This tiny island – one of 15 inhabited Outer Hebridean islands – hosted another successful 2 Islands half marathon on Saturday (August 25) which saw a fast veteran victory.

Grimsay’s 56 year-old Oliver Foote won by over 90 seconds in 80:40. This represents the fastest time for a V55 Scottish athlete this year! Oliver Foote (No.61) takes 2 Islands half marathon victory at the age of 56!

Foote beat off competition from Ardhasaig’s John MacAskill – himself a V45 – who ran a fine 82:27. The veterans were both ahead of Glasgow’s Oliver Tulloch, a youngster in comparison at just 27 years-old!

Tulloch ran well to just beat Owen Davies for third place. The two athletes both recorded 87 minutes exactly when crossing the line together after 13.1 miles of racing.

Runners were well spread out at this latest edition of the Lancaster Race Series.

The series incorporates every race distance from 5k to the marathon over the course of the whole year.

The Pilling 10k (August 25) always attracts a wide variety of runners, adding to its appeal, and this year’s event was no different.

V40 Sharon Chapman excelled to take the ladies’ race in 43:23. V50 athletes Jill Jefferson and Linda Rix were also on top masters form when taking second and third respectively in 45:10 and 45:32.

While the full results were still being compiled, Guernsey’s own Pete Amy scored an impressive home win when he ran a huge 14 minute PB to take victory on the island on Sunday (August 26). Amy’s best before the event was a relatively modest 2:56:20. He smashed that to pieces in strong winds to score victory in a superb 2:42:27.

The V35 athlete is coached by international marathon runner and fellow Guernsey lad, Lee Merrien. He has run PBs for almost every distance this year. This is despite mainly running in often very blustery conditions on the Channel Island.

It was another home victory in the women’s race for Guernsey’s Ulrike Maisch. Maische is relatively new to the sport at the age of 40, but won in a strong 3:03:14. Her win represented her third title on the island, a phenomenal feat considering she only started competing three years ago!

The women’s race was a competitive one at this popular Carlisle 10k (August 26), with the top three crossing the line within just over a minute of each other.

Cumberland AC’s Natalie McCarron’s season’s best of 40:58 earned her second, ahead of Derwent Cockermouth’s Liz Watson. However, Watson’s 41:24 was a PB, so a great result for the local athlete.

Eden Runners provided the first man across the line when John French took the win in 34:29. Fellow V35 Steven Berry won second prize for his Border club in 35:46.

Rock 2 Roll’s David Thompson made up the podium positions with a 36:28 result.

There was also a very fast win for Marc Scott at Thursday’s Mid Cheshire 5k. Click here to read all about it.

Catch up on the top 10 fastest parkruns across the UK this weekend here.