David Flynn and Mick Clohisey among weekend winners in Ireland 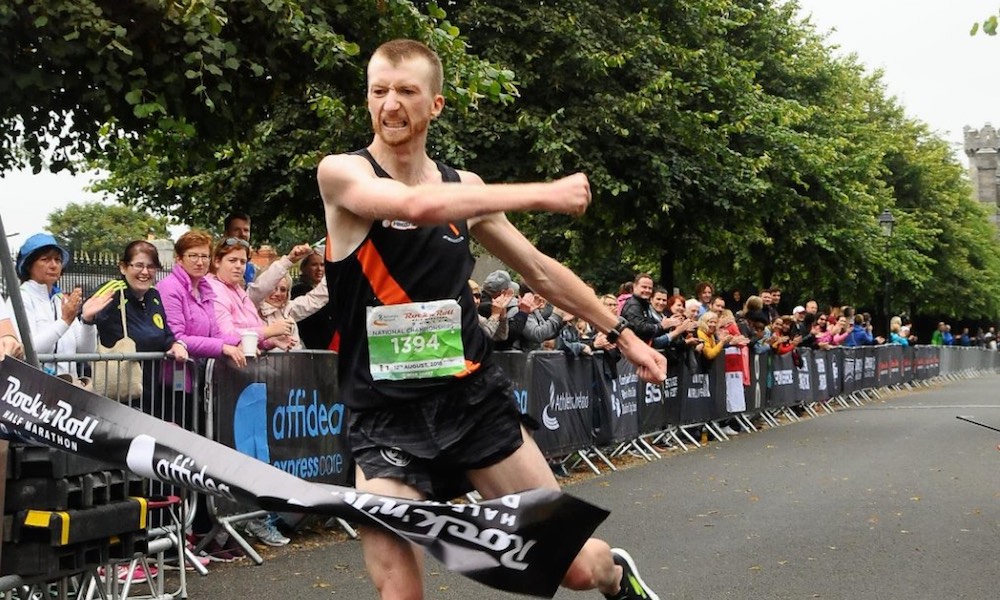 The Irish half marathon champion and Aisling O’Connor take the honours in Tullamore and Clohisey wins in Claregalway.

Recently crowned national half marathon champion David Flynn of Clonliffe Harriers proved the class of the field at the Tullamore Quinlan Cup Half Marathon on Saturday (August 25).

Flynn’s time of 68:44 saw him finishing with a minute to spare over second-placed Paddy Birch from Toronto who finished in 69:26. A distant third in 72:13 was Mick Fogarty.

First woman was Aisling O’Connor of Edenderry AC in 81:21. She was followed by Caroline Donnellan, also Edenderry AC, in 84:17 and Emma Boland of Newbridge AC in 93:24.

Local athlete Kevin Maunsell ran the fastest half marathon time of the weekend when winning Boston Scientific Clonmel Half Marathon on Sunday (August 26) in 67:22.

His time put him four minutes clear of the chasers led by William Stephen’s of Coolquill AC in 71:87. Third in 73:11 was Leevale’s John Shine.

First woman in 88:27 was Linda Grogan of Dundrum AC. Jacqueline O’Connor of Serpentine RC in London was second in 89.42, while third was Joan Ennis of Grange Fermoy AC in 90.24.

Also on Sunday, Freddy Sittuk won the Oylegate Half Marathon in Co Wexford in a time of 77:32. Second in 77:39 was Joe Lillis of United Striders. First woman was Deirdre Ni Chearbhaill of Crusaders AC in 1:40.45.

A margin of over three minutes gave Mick Clohisey of Raheny Shamrock victory in the Claregalway 10k on Saturday (August 25). Clohisey, who ran the marathon at the European Championships only fortnight ago, finished in 30:27, with Conor Dolan of Galway City Harriers a distant second in 33:33. First woman in 37:39 was Regina Casey of GCH.

Winning the Warrior’s Run 15km from Strandhill to the top of Knocknarea and back in Co. Sligo was Jake O’Regan of St John’s AC in 54:44. Second in 54:53 was local athlete John Paul Carty, who had led to the bottom of the hills, while third in 57:30 was Aidan McMorland, another Sligo native.

Deirdre Byrne of Sli Cualann was first woman in 64:59 followed by previous winner Heather Foley, in 65:35. Eimear O’Connor was third in 69:45.
Winners of the Junior race were Malachy O’Brien and Ava Griffin.

Off the Antrim coast, Neil Weir of Willowfield Harriers and Clare Tonry of Dub Runners were the winners of the Rathlin Run 10-Mile.

Weir’s time of 58:59 put him comfortably clear of second-placed Philip Goss of North Belfast Harriers who finished in 60:14. Third in 67:03 was Keith Dawson.

Tonry was fifth overall in 68:07. Second was her Dublin Runners club mate Colette McCourt in 72.49 while third was Beverly Mitchell of Albertville Harriers in 75:37

Winners of the 5km race were Peter Fleming of Ballymena Runners and Erica Calder of Dundrum South Dublin.

Irish decathlon champion Shane Aston of Trim AC retained his title at the NI and Ulster Combined Events Championships at the Mary Peters track in Belfast over the weekend.

Aston has had a busy summer, most notably breaking into the 7000 point bracket for the first time with a total of 7057 at Hexham last month. Bowler, who is based in the UK, had finished second in the British Championships last May with a score of 7263 points. Most recently he won the Irish pole vault title with 4.40. Also competing was British U23 athlete Liam Reveley of Blaydon Harriers and AC, who had a senior best of 5867 points.

Bowler started well with the best time of the day in the 100m and a 6.73 in the long jump, with Aston not far behind. Reveley made the most of a friendly wind to leap out to 6.85m in the long jump and also soared over 2.04 in the high jump. Good scores in the shot and 400m were enough to put Aston on top of the points table overnight, with 3606 points. Reveley was a close second on 3587 and Bowler third on 3355.

On the second day, Aston pulled away on the second day with solid performances in the hurdles, discus and javelin. Bowler proved best in the pole vault while Reveley raced away with the final 1500m race. With the scores were totted up, Aston was a clear winner with 6617 points followed by Reveley with a personal best 6295 and Bowler third on 5800.

In the women’s heptathlon, it all came down to the final 800m.

Megan Marrs, the City Lisburn international hurdler, had led overnight and held on to that lead on the second day, despite big points for Laura Frey of Lagan Valley AC in the shot and javelin. With only the 800m left, Marrs had a lead of over 300 points.

Ireland’s 10 athletes were in exceptional form in Berlin taking home nine medals, six of which were gold.

Also taking gold medals back to Ireland was Greta Streimikyte of Clonliffe Harriers who posted a superb 4:48.54 to win T13 1500m gold, while in the field events there was discuss gold for Eagle AC’s Noelle Lenihan in the F38 event in a world record 32.95m.

Raheny’s Annette Kealy, who is off to the World Masters Athletics Championships in Malaga this week, was first woman and fourth overall in the 5km at the Portmarnock 5-mile and 5km races on Thursday evening (August 23).

Winners of the 5-Mile race were Colm Rooney of Clonliffe Harriers and Zoe Quinn of Raheny Shamrock. Rooney’s time of 25:29 put him over a minute ahead of the chasers, led by Ray Hynes of Donore Harriers who finished in 26:36.

Third in 28:08 was Stephen Butler of Dublin Bay RC. Quinn finished 11th overall in 31:20; Sharon Cleere and Elaine Howard were second and third.

Scott Rankin of Foyle Valley was a clear winner of Dessie’s Run 10km in Derry on Wednesday evening (August 22). Rankin, who finished in 31:48, was followed home by Kyle Doherty of City of Derry Spartans in 32:16 and Eoin Hughes of Acorns AC in 32:38.

Finishing eighth overall and first woman in an eye-catching time of 33:59 was Anne Marie McGlynn of Letterkenny AC. Ciara Toner of Springwell RC was second in 36:37 and Nakita Burke of Letterkenny AC third in 36:44.