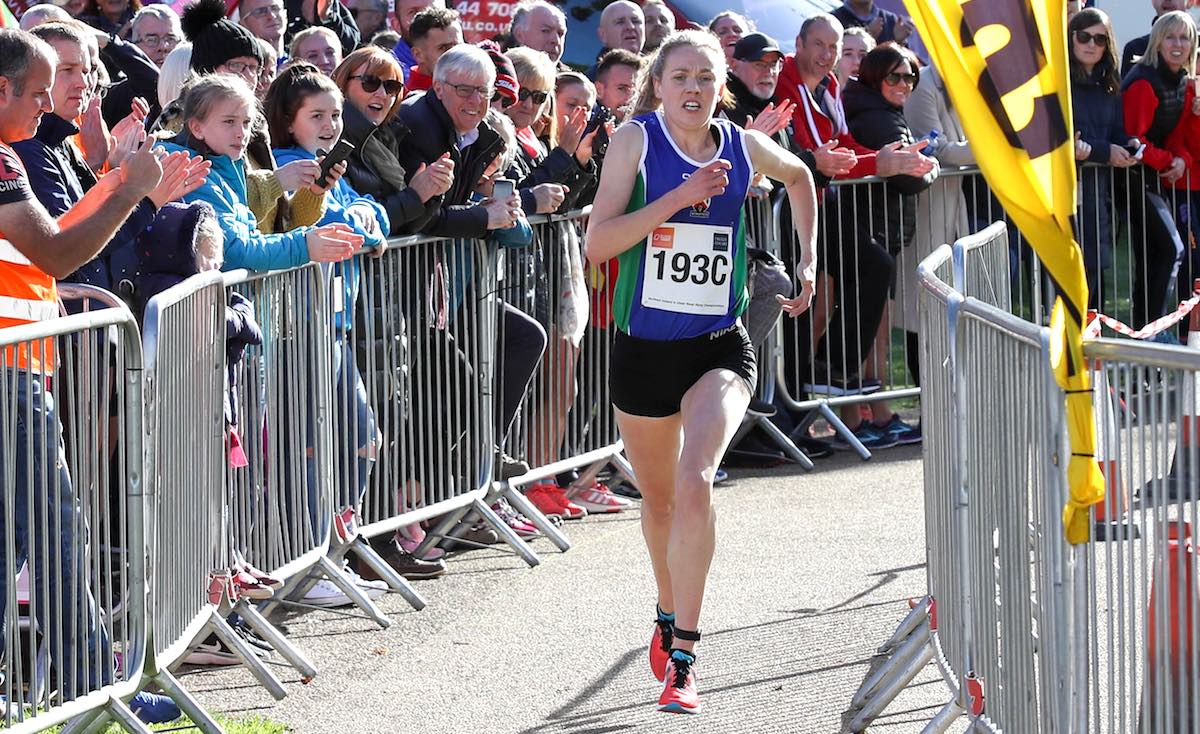 Defending champion Caroline Kepchirchir set a new event record when winning the 38th Belfast City Marathon in a time of 2:36:38 on Sunday (May 5).

That time looks even better considering that the new course from Stormont to Ormeau Park was revealed to be 0.4 of a mile too long; in other words, it measured 26.6 miles rather and 26.2 miles thanks to a lead car veering off course.

Top three men in the NI and Ulster Championships were Jarlath McKenna of Bristol and West, Vincent McKenna of Acorns AC in 2:32:22 and Max Travers from Annadale Striders in 2:37:06. Gladys Ganiel of North Belfast Harriers, running Belfast for the first time, was fourth overall and first of the local women in 2:39 (tbc). Catherine Johnston was second in 2:58:21 and Louise Smith of North Belfast Harriers third in 2:59:51.

Jim Corbett was fastest in the wheelchair race with a time of 2:20.55.

In a record breaking year for entries, approximately 5,000 signed up for the marathon alone with 18,000 runners in all between the marathon, the relay and the fun run and walks.

Somba’s time of 14:36 put him comfortably clear of Kieran Kelly from Raheny Shamrock AC who finished in 14:45 and was awarded the inaugural national championships title. Kelly, who is new to the roads, already has national medals at 400m, 800m and 1500m on the track. Conor Duffy of Glaslough Harriers was third in 14:50.

On Sunday (May 5), Paddy Hamilton of Slieve Gullion AC and Emma Mitchell of Team Nike made it a north of Ireland double at the Drogheda 10km. Hamilton won the race in 31:39, with Eoin Hughes of Acorns AC second in 32:36 and Dylan Keegan from Rathfarnham WSAF third in 33:16. Mitchell’s winning time was 36:58 and Niamh Clifford from Star of the Laune AC was second woman. First M50 was Tommy Hughes, seventh overall in 33:55.

Norah Newcombe of Mayo AC was the winner of the West of Ireland Women’s 10km, held on a warm day in Castlebar on Sunday (May 5). Her time of 37:39 secs put her over a minute clear of second placed Edel Reilly of Hollymount ASC in 39:00. Isobel Oakes of Ballinamore AC was third in 39:38. Newcombe had previously placed second in 2015 and third in 2016 when Sinead Diver, on a visit home from Australia, won the race in a course record time of 35:27.

John Travers of Donore Harriers was a runaway winner of the 3000m at the Irish Milers Club Meet held in Greystones on Saturday (May 4).

Travers finished in 8:02.36. Damien Landers of Ennis Track Club was a distant second in 8:18.43, with Pierre Murchan of Dublin City Harriers third in 8:20.07. Laura Shaughnessy, recently transferred to Galway City Harriers, was the fastest woman in 9:44.51.

Louis O’Loughlin of Donore Harriers improved his best time to 1:51.24 when winning the men’s A 800m. Aengus Meldon of Dundrum South Dublin AC was second in 1:52.33.

In the USA, Sophie Murphy of Dundrum South Dublin AC won the 10,000 in a new meet record of 35:21.03 at the Metro Atlantic Athletic Conference Championships in New jersey on Satutday (May 4)

At the Diamond League meet in Doha, Qatar on Friday (May 3), Irish champion Leon Reid of Menapians AC finished seventh in the 200m with a time of 20:93 secs. Winner of the race in 19.99 was Azerbaijani-born Ramil Guliyev who runs for Turkey.

“Dangggggggg legs spinning like looney toons, far from my best but still far from the world championships. No bounce from me today,” Reid tweeted after his run.

A week earlier, Reid had run 10.45 secs for 100m in Catania, Sicily, putting him top of the Irish rankings.

Zak Hanna of Newcastle AC was a clear winner of the Hill and Dales series mountain race on Binnian in the Mourne Mountains on Thursday (May 2). Hanna completed the two-mile uphill only race in 20 mins 12 secs putting him over a minute clear of second placed Aaron McGrady. The East Down AC athlete finished in 21:45. Third was Seamus Lynch of Newcastle AC in 22:56.

Winning the women’s race was Esther Dickson of Newry AC in 27:29. Sarah Graham of Mourne Runners was second in 27:54 and Shileen O’Kane of Lagan Valley AC third and first W50 in 28:39. A total of 254 completed the race.

The fastest parkrun athletes in Ireland this weekend were Lee van Haeften and Martina Kiely. See the top ten in the weekly rankings here.