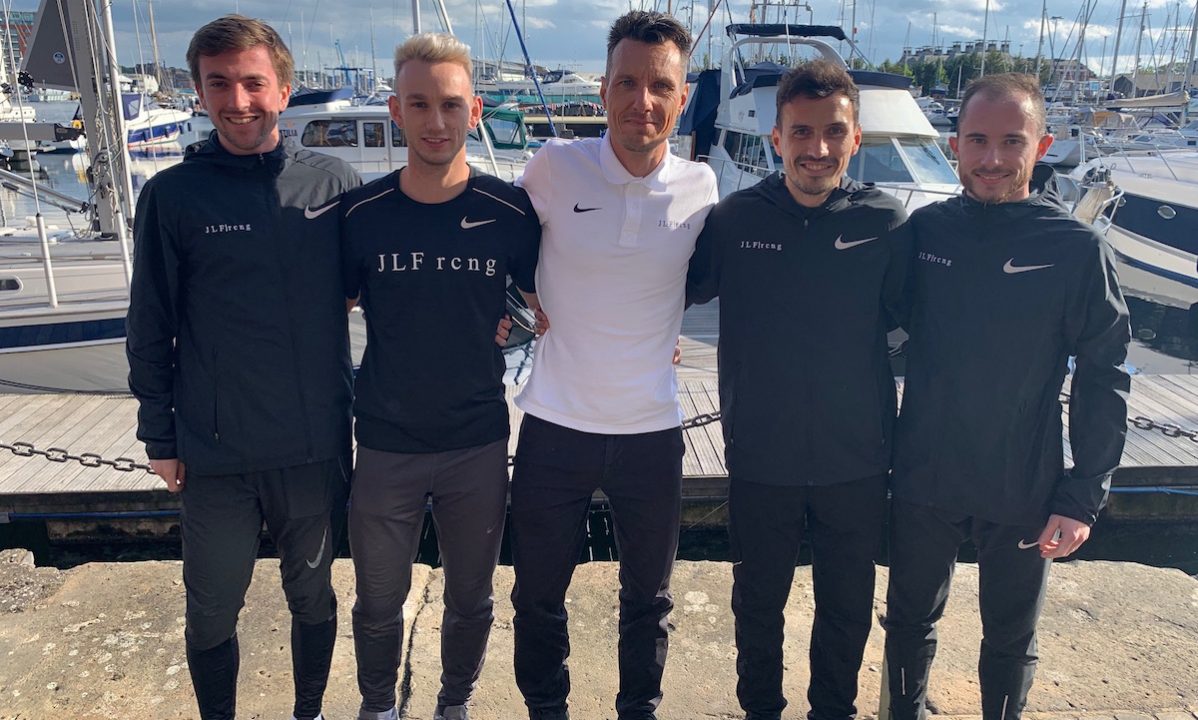 The aim of the programme, called JLF Racing, is to help take athletes identified and invited onto the project to the next level.

“We have so far taken on three of the region’s leading distance running talent, with the intention of assisting them financially with their training and racing, as well as doing as much as possible to take them to the next level” said Directeur Sportif James Lawler. This assistance includes quality training and racing kit.

“The main motivation is really to stay in touch with the sport,” stated Lawler, who ran a 2:22:36 marathon best himself back in 2011. “Once I stopped competing personally, and many of my peers stepped away from the sport and the training groups broke up, it was easy to drift away… I felt I had really lost touch with the sport I love.”

With the announcement today of 2:16 marathoner Aaron Scott there are now four members of the team. The three athletes already part of the project are Benjamin Davies, Matt Bergin and Josh Lunn.

The youngest, 20 year old Davies, is a GB World Cross Country representative and 3:49 1500m man. The there is Matt Bergin, Irish International with 13:54 5000m and 3:44 1500m bests, aged 26 and fast-improving Josh Lunn, also aged 26 with a recent 66.29 half-marathon performance to his name from last month’s Reading Half Marathon and a focus on a debut marathon later this year.

“Their Coaches (Mark Goodwin, Simon Goodwin) focus on the training aspect, whereas JLF Racing exist to provide support in all other areas, and to promote their achievements and assist them in gaining entry to the best races to showcase their talent” added James.

Speaking to Lawler it is clear his main focus is helping the athletes “and we would like to expand and help more athletes in future. It’s important to remember the commercial promotion side of the project but the main objective is seeing the guys achieve their goals.”

What about some female members of the team for the future? “Absolutely yes,” the director sportif is quick to reply. “We have already discussed ladies we’d like to speak with about how we can help. This is a forward-thinking and modernist approach to distance running and nobody who is looking to maximise their performance is excluded.”

Recent weeks have seen the project launch onto social media, with established international athletes among the growing number of followers across all platforms.

What does this mean for clubs?

One concern the old guard might have is the impact such teams might have on the excellent club structure in the UK. Yet it is clear that the team will encourage their athletes to represent their teams and only wear full JLF Racing kit when not representing their clubs (or their countries).

“We’re not looking to be affiliated. It’s more like a supporting structure for the individuals than a club. That’s why these sorts of ventures are referred to often as ‘projects’. They have to be thought of differently to a club. We don’t want to be competing with their clubs in any way as they come first, but we’re also not looking to be immersed in club rules and politics. We’re free spirits in that sense.”

Exciting times ahead and great to see committed athletes getting the support they need to perform at their best. maybe we’ll set up a Fast Running Project in the future to race against the JLF racers… Maybe.