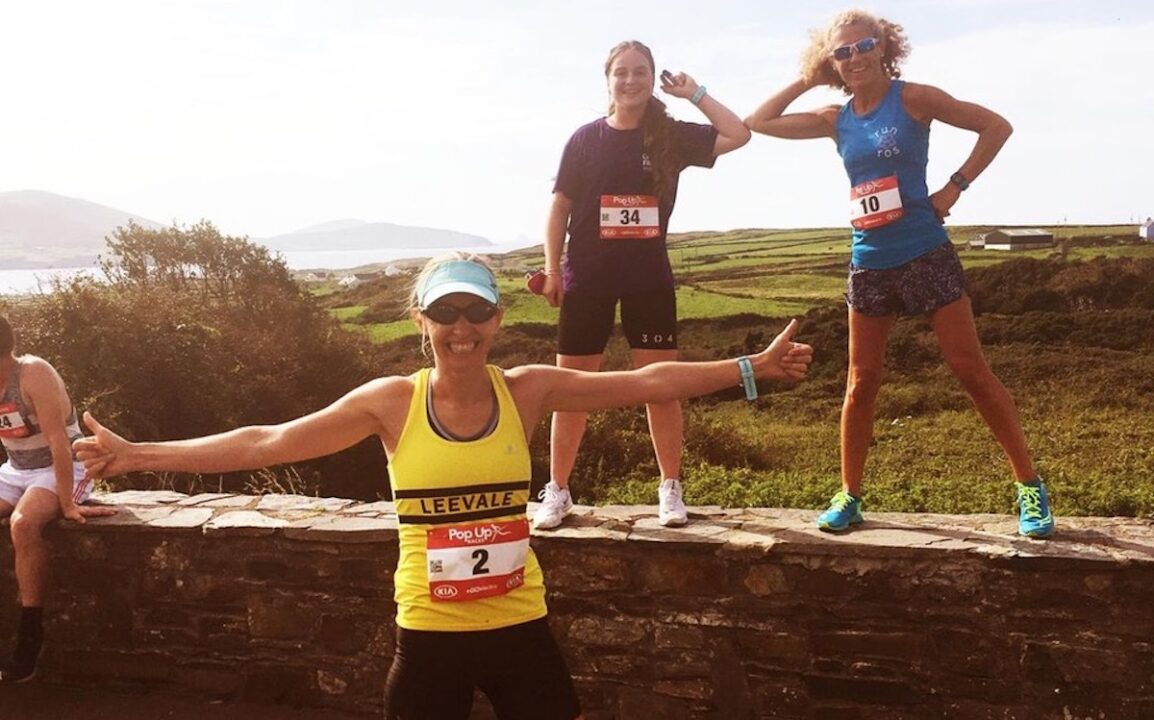 Although the COVID19 restrictions imposed on Dublin city and county on Saturday September 19 forced some sporting cancellations, a number of road races took place around the country.

Many times Irish international athlete Lizzie Lee of Leevale AC made a return to racing when she finished first woman at the Allihies 5-Mile in Co Cork on Saturday. Lee finished fifth overall in 30 minsd 9 secs.

Gary Scully and Shane Scully from Nenagh finished pretty much together for first and second place, with Gary timed at 28 mins 20 secs and Shane a second slower. Third in 29:01 was Kristaps Liepins of Watergrasshill AC. Rosaleen Mackeown of Leevale AC was second woman in 34:20, with Nina Murphy third in 40:33.

On the same day in Louisburgh, Co Mayo, Brendan Conway of Westport AC was the winner of the Clew Bay Half Marathon in a time of 74 mins 9 secs.

Second was junior athlete Ethan Lloyd, also of Westport AC, in 75:25, while third was Eoin McLoughlin of Ballina AC in 83:07. Catherine Thornton in ninth place overall was first woman in 87 mins 20 followed by Sheila O’Byrne of Parnell AC in 91:29 and Patricia McLoughlin of Le Cheile AC who was also first W40 in 91:37.

Seamus Somers of Sligo AC was the winner of the Charlestown 10km, also in Co Mayo on Saturday, with masters taking the top three places. Somers finished in 32 mins 32 secs, Paddy O’Toole of Westport AC second in 34:17, and David Tiernan of East Mayo AC third in 34.24.

First woman was Norah Pieterse of Mayo AC in 36:12, with Sarah Doohan of Corran AC who was second given the same time. Junior athlete Caitlin Hughes of Swinford AC was third woman in 40:16.

Winners at the Thursday Club “No Watches”5 km/10km, at Mondello Park in Co Kildare on Thursday (September 17) were Garry Cribbin of Celbridge AC in 16 mins 19 secs and Marianne Mulreid of St Coca’s AC in 20:14.

At the My Club 5km Run in Avondale, Rathdrum on the same evening, Derek Crammond of Parnell AC was the winner in 16 mins 26 secs, followed by Ian Conroy of Raheny Shamrock in 16:44 and Paul Gary Duffy of Inbhear Dee AC in 16:53. Seventh and first M60 was Mick Byrne of Parnell AC in 17:16.

Catherine O’Connor was first woman in 18:55, followed by her Parnell team mates Sheila O’Byrne in 19:36 and Rebecca Harris of Ashford AC in 20:04. Among those competing was a large group from Brothers Pearse in Dublin.

Isobel Oakes was the winner of the women’s 4km at the 25th annual Castlegar Open Cross-Country in Co Mayo on Saturday (September 19). Oakes had a narrow victory over Michelle Kenny of Leevale AC with both women crossing the line in 15 mins 41 secs.

Best of the teams by some way was Ennis TC with its four counting finishers in the top eight. Galway City Harriers were second and host club Castlegar AC third. Castlegar also won the Galway novice title.

At the Hanžeković Memorial in Zagreb on Tuesday (September 15), Nadia Power of Dublin City Harriers ran a smart race to win the women’s 800m in 2:02.08, taking over in frotn with 200m to ge and beating (PB Hanna Hermansson of Sweden into second place in 2:02.66. Marta Pen Freitas of Portugal was third in 2:03.02.

Finishing third in the men’s 400m hurdles at the Galà dei Castelli in Bellinzona, Switzerland, also on Tuesday was Thomas Barr, whose time of 50.00 was his fastest of a much truncated season season. Winner was Ludvy Vaillant from France in 49.22

In London on Tuesday evening, three Irish athletes were in action at the Night of the Fifteen 1500ms in Battersea Park. Louise Shanahan of Leevale AC finished eighth in the women’s race in 4:18.42, followed by UCD’s Ciara Everard ninth in 4:19.61. In the men’s elite race, Eoin Pierce of Clonliffe Harriers was seventh in 3:45.87.

In the C race, Tommy Hughes for once was not the fastest M60 athlete on the night. That honour fell to David Clarke of North Belfast Harriers who clocked a time of 9:30.42. One place behind Clarke in 9:32.18 was Hughes. Fastest woman was Rachel Gibson of North Down AC in 9:55.63

On the same night in Rome, Sean Tobin of Clonmel was earning a crust at the Diamond League meet, running as a pacemaker for the men’s 3000m, just under 60 seconds or each of the first four laps and helping create some national and area records in the process.

With Dublin county locked down for three weeks from midnight that day, the race took place entirely in Co Wicklow on an out and back course from Lough Tay to Crone Wood and back. The full Maurice Mullins Ultra over 52km takes place next Saturday (September 26) on a similarly modified course.

In Co Waterford, Mark Pinfield of Watergrasshill AC was the winner of the Knockmealdown Half (with a 1050m climb) in a time of 2:22.29. First mixed team in fourth place overall was Shane Lynch and Karalee McBride in 8:43.04. Paul Mahon and Moira O’Sullivan clocked 9:50.10 for second. First masters team in 10:25.48 were Deon McNilly and Eamon McCrickard.
Best of the women’s teams were Helen Corden and Helen Ockenden in 11:45.58

In the C class Chris Perry and TomPerry were first home in 5:57.04, Colin Brennan and Molly Brennan were first mixed pair in 7:03.46 and sisters Niamh and Caoimhe O’Boyle first women’s team in 7:33.02. Ian McCauley from Newtownabbey, Co Antrim was the winner of the Belfast to Dublin Ultra held on Saturday (September 19). Because of the Dublin lock-down, the race course was altered to turn around at the 85 mile mark at Julianstown and finish in Dundalk.

McCauley finished the 107-mile course in 20 hrs 35 mins. Second and first woman was Fionnuala O’Mara from Ballina in Co Mayo in 21 hrs 47 mins; a consistent performer over the past deacde now competing in the W55 age group.