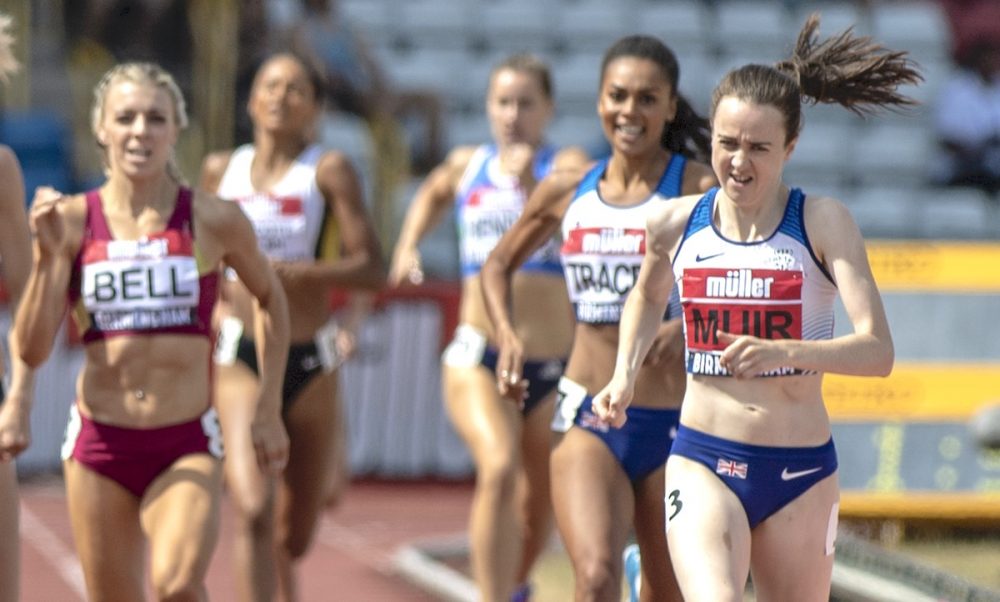 The double world indoor medalist storms to 800m gold in Birmingham as Chris O’Hare leads another Scottish 1-2-3 in the men’s 1500m.

Laura Muir, Chris O’Hare and Steph Twell all impressed as they won distance gold on the final day of the British Championships on Sunday (July 1), while fellow Scot Beth Dobbin lowered her own Scottish 200m record in a new championship best with victory in the women’s 200m final.

Muir went down in distance to work on her speed in the 800m, and stormed clear on the second lap to clinch an impressive 2:01.22 victory.

The 25-year-old was followed home by world indoor bronze medallist, Shelayna Oskan-Clarke in 2:01.94 as Adelle Tracey took the bronze medal in 2:02.00.

“I’m really happy because the strength in depth we have in the women’s 800m is so strong,” said a delighted Muir said afterwards. “I knew I had to attack the race and hold off until the end and I did that.

“I was feeling it in the last 50 metres but I wanted to get home in first place and I did that. I did well indoors but Berlin will be my first chance to win a senior outdoor medal.”

In the men’s 1500m O’Hare stormed clear of the field in the closing stages to claim victory in 3:46.72. The defending champion got the better of Edinburgh clubmate Jake Wightman who had made an earlier break for the title. A delighted Twell collected her fifth title at the British Championships in a slow starting but fast-finishing 5000m, with a 16:07.24 win. Laura Weightman celebrated her birthday in style with the successful defence of her women’s 1500m title and stopped the Scottish clean sweep of the distance events on the final day in Birmingham.

England’s Commonwealth 5000m bronze medalist booked her place on the plane to Berlin with a perfectly executed tactical race to take gold in 4:08.80. Jemma Reekie stormed down the home straight to clinch silver ahead of a disappointed Sarah McDonald who had kicked early in the race but it wasn’t enough.

European junior champion Reekie clocked a personal best 4:09.10, but will now need to achieve the qualifying standard over the coming weeks to secure her selection for the European Championships, which take place in August.

Meanwhile, speeding to her fourth Scottish record of the summer, Beth Dobbin stole the show in the 200m, with a blistering 22.59 championship record. The 24-year-old has vastly improved on her 2017 sixth place finish and pipped Commonwealth sixth placer, Bianca Williams to the gold medal and British title in a thrilling finish by a whisker, with Williams – the 2017 fourth placer – clocking a 22.60 season’s best. Further behind, Jodie Williams replicated her position from twelve months ago in 22.78.

Scorching to a swift 20.24 championship record, Nethaneel Mitchell-Blake captured the 200m national crown ahead of Olympic fourth placer, Adam Gemili, who clocked 20.26 just behind in a nail-biting finish. The 2016 victor was followed home by Commonwealth bronze medallist, Leon Reid, who ran 20.31  just hours after registering a 20.27 lifetime best in the heat.

After a lengthy competition lay-off with injury, four-time champion, Dai Greene enjoyed a popular 400m hurdles victory, storming to a 50.06 dominant win – his first in these championships in five years.

Behind, Commonwealth fourth-placer and the 2017 winner, Jack Green clocked 50.13, while Sebastian Rodger replicated his 2017 bronze medal position with 50.18.

Olympic finalist and world semi-finalist, Matthew Hudson-Smith claimed his third straight victory in these championships with a 44.68 season’s best from Rabah Yousif, who ran a 45.39 season’s best for silver, with Cameron Chalmers.

World indoor 60m hurdles champion, Andrew Pozzi made light work of the 110m hurdles field by storming away to an emphatic 13.61 victory, to add to his 2017 national crown.

5000m athlete Marc Scott was among the winners on Saturday (June 30) and a report from the first day of action can be found here.