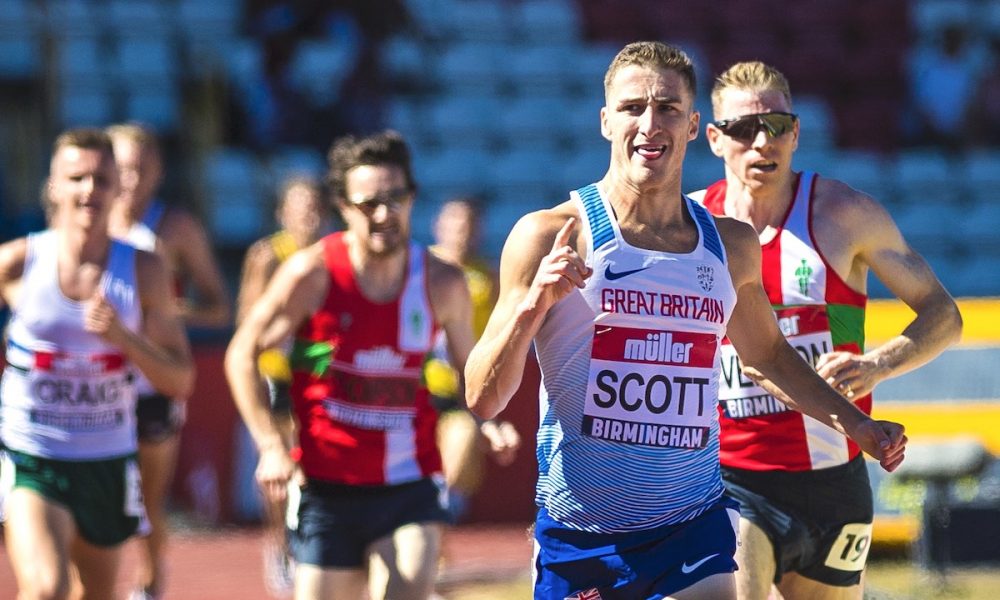 US-based distance runner secures his spot on the GB team for the European Championships, as Dina Asher-Smith breaks the women’s 100m championship record in Birmingham.

Marc Scott will compete for Great Britain at the European Championships in August after securing selection with victory in the 5000m on the first day at the British Championships in Birmingham on Saturday (June 30).

Scott, who competed over the distance at the World Championships in London last year, was one two athletes that had already achieved the qualifying standard of 13:30 for Berlin. All that was left for the US-based athlete to do was finish in the top two in Alexander Stadium.

With a large field of 27 athletes on the start line and the hot conditions to battle, the first few laps were slow and all trying to stretch out the field with Charlie Hulson at the head of a long procession of runners after seven laps. The front of the race hit the 3000m mark in a pedestrian 8:26.36, before the pace picked up with four laps to go with Ben Connor, Jonny Mellor, Chris Thompson and Scott out in front.

Andy Vernon joined the lead group with two laps left as Mellor faded in the heat. At the bell, Thompson was out in front, before Vernon and Scott made their moves for which Thompson had no answer. Scott crossed the line in 13:47.00 for gold, while Vernon clocked a season’s best 13:47.81 for silver. Thompson bagged bronze comfortably over three seconds ahead of Connor in 13:49.85.

Over the barriers, race favourite Zak Seddon won a first British title with a narrow victory over Ieuan Thomas in the men’s 3000m steeplechase. Seddon clinched gold in 8:33.12 ahead of Welsh Commonwealth athlete Thomas in 8:33.88 and both will be on the plane to Berlin. Jamaine Coleman claimed bronze in 8:38.17. Sarah McDonald, with 4:21:74, finished just ahead of Katie Snowden to win her women’s 1500m heat, while Jess Judd in 4:15.51 was the winner of the second heat ahead of Jemma Reekie and Laura Weightman.

The sprinters battled a strong headwind during the early qualifying rounds, but thankfully it had eased by the finals.

Britain’s fastest woman Dina Asher-Smith delivered as expected and won the women’s 100m gold. Asher-Smith, who lowered her national record to 10.92 at the beginning of June in Oslo, posted a championships record time of 10.97 for the win. It was a photo finish for the remaining podium places and Daryll Neita took silver in 11.19 and Bianca Williams bronze in 11.20. Imani-Lara Lansiquot, who features in the Fast 10: class of 2018 on Fast Running, finished fourth clocking a season’s best 11.23. Earlier in the day, the 20 year-old advanced to the final as the comfortable winner of third of three of semi-finals.

The second day of the British Championships gets underway on Sunday and some of the finals include the women’s 3000m steeplechase, men and women’s 800m, women’s 5000m and the men’s and women’s 1500m.

You can find out more about Sunday’s action, including the timetable, start lists and tv guide here.