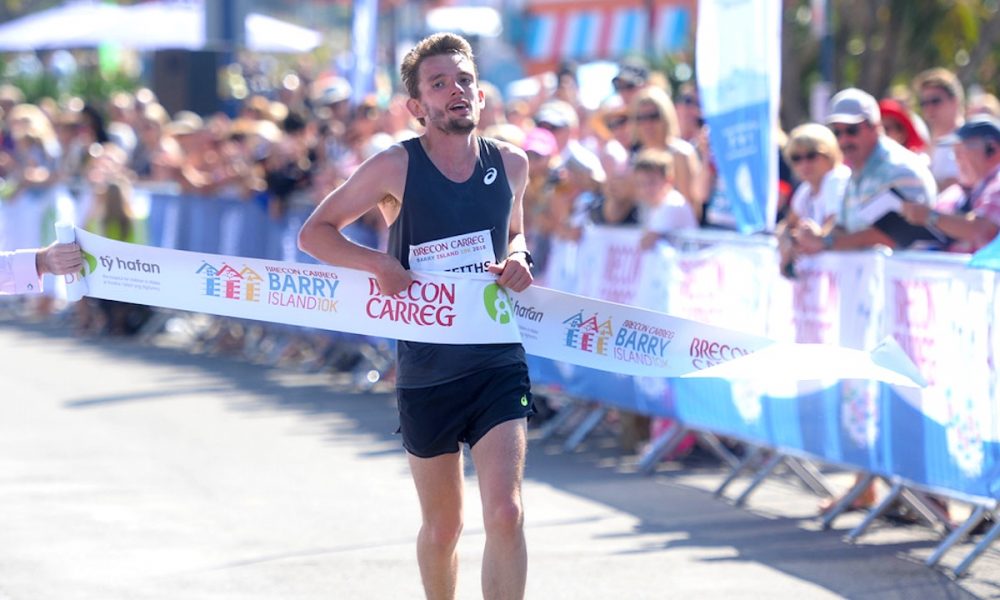 The Welshman takes the honours in his second race post injury as Elsey Davis claims the women’s victory.

Dewi Griffiths showed no signs of a lack of fitness as he demolished the field in scorching conditions at the inaugural Brecon Carreg Barry Island 10K on Sunday (Aug 5).

The Swansea Harrier would have aimed to be at the European Championships in Berlin, not Barry, had it not been for stress fractures he suffered before the Commonwealth Games. Griffiths looked like he had never been away when he made a winning comeback at the British 10K in London last month, and he led from the front along the popular seaside promenade ahead of 3500 runners in South Wales.

Griffiths stormed through an undulating opening 5km in 14:44 whilst holding off the challenge from Cardiff AAC’s Matt Clowes and Swansea clubmate Josh Griffiths. The pair gave chase through Romilly Park and along the Knap beach, but the British international dug deep to hold-off the familiar contenders before a downhill finish.

He crossed the line in 29:48 ahead of Clowes who came home in 30:27, while Griffiths was another 62 seconds back in third. Griffiths is now looking ahead to competing in the inaugural Commonwealth Half Marathon Championships having laid down a marker to England team member Clowes.

“By the time I got to 7K I was in the hurt locker, but I was fortunate to be able to look back on my experiences in the past where it has hurt and I’ve been able to hold on,” said Griffiths. “I knew if I was hurting, then everyone else was, but those hills hurt in the heat.

“I came here wanting to run under 30 minutes and I’ve done that so it’s a step towards the ultimate goal which is getting back to where I was. I missed out on the World Champs and I missed the Commonwealth Games so those goals are there for me, and I want to go to the Olympics in Tokyo.

“The Commonwealth Half Marathon Championships will be my Commonwealth Games, I’m going to give it my best shot in the red vest. It’s nice to beat these guys already ahead of next month.”

In the women’s race, Elsey Davis went head to head with Rachel Felton in a Run 4 Wales 10K series decider.

Davis won at the Brecon Carreg Cardiff Bay Run while Felton took the inaugural ABP Newport Wales 10k title. Davis earned a lead of 25 seconds at the halfway mark and held-off Felton to take the victory in 34:37, a full minute ahead of her nearest rival.

“It was hot and it was hard but it was a much more scenic than the Cardiff 10k and I really enjoyed it,” said Bristol AC runner Davis.

“I’ve been running well on the track this summer and came into this race in good form having finished 4th in English 5k Championships in Manchester.

“I’m looking to get my times down on the track this summer and this is a good build-up for the Cardiff 10K next month.”