Dani Nimmock among this weekend’s winners on the roads 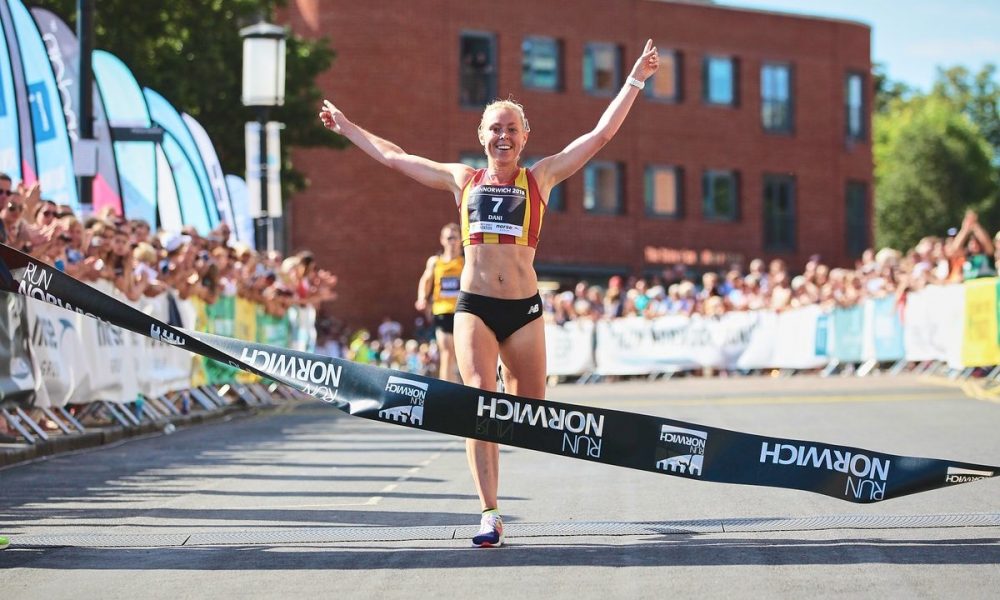 Fast times galore at races in Norwich, Ipswich, Manchester, Barry and York, and Brits impressed in the US.

Dani Nimmock, who was named in the England team this week for the Commonwealth Games Half Marathon, was on form on the streets of Norwich along with Nick Earl, as both athletes set course records to win the Run Norwich 10k on Sunday (Aug 6).

City of Norwich’s Nimmock was a class apart in the women’s race, taking the win in 35:03 to prove she has short speed as well as impressive endurance following her Manchester marathon victory earlier in the year.

Earl was untroubled in victory when he broke the tape in 30:49, well ahead of club mate Ash Harrell’s 31:34, while James Senior made it a podium whitewash for the City of Norwich when he claimed third place in 32:51.

Earlier in the week, Fast Running’s class of 2018 stalwart Dave Norman made his return to racing at the Sale Sizzler 5k in Manchester following a calf injury and posted a very strong 15:36 to finish fifth overall.

Great to be back racing last night at the Sale Sizzler 5k, following my second calf tear in eight months back in May. After recording 16:08, 16:04 and 16:01 in this series last year, was pleasantly surprised with 15:36 for my first race back from the tear. Ive now got three months before I move into the V40 age group and I hope I can build on last nights race and keep moving forwards. 📷 Pete Brown Photography

He was understandably delighted with his result, adding: “(It was) great to be back racing last night (Aug 2) at the Sale Sizzler 5k, following my second calf tear in eight months back in May.

“After recording 16:08, 16:04 and 16:01 in this series last year, was pleasantly surprised with 15:36 for my first race back from the tear. I’ve now got three months before I move into the V40 age group and I hope I can build on last night’s race and keep moving forward.”

The race was won by his Altrincham & District club mate Mohammad Aburezeq in 14:30, well ahead of Sale Harriers’ Matt Barnes in second, who recorded a time of 15:22. Hallamshire Harriers’ Andrew Challenger was third in 15:26, with Harvey Maguire the only other athlete ahead of Norman in 15:31.

Leigh Harriers’ Lauren Howarth was completely dominant in her victory when she ran 16:21 to take the women’s race, with Sale’s Hannah Brown and Katherine Wood fighting it out for the minor podium spots, finishing in 17:25 and 17:41 respectively.

Friday night saw some equally hot performances at the Ipswich Twilight 10k, where the top three men – two of them U20 – all scored PBs, as did the winning lady.

Taking the overall top prize was Ipswich’s John Millar in 30:40, the U20 Bath University student thrashing his club mate Alex Lawrence by nearly three minutes in the process. Lawrence had a tighter fight for his position with Felixstowe’s Ben Carpendale crossing the line in 33:21 and 33:46 a piece.

The home club saw another victory for their athletes in the women’s race when V35 Helen Davies showed her class in taking the win in an all time PB of 34:15. Davies races sparingly but makes it count whenever she turns out, most notably when she represented Great Britain twice in 2010 over the marathon distance, at the Commonwealth Games and the European Championships.

Davies saw off competition from her much younger rival, West Suffolk’s U20 Emily Moyes, who ran 35:58 for second, while Ipswich’s Sara Bird took third in a season’s best 37:54.

The vets showed the seniors how it’s done at the Asda Foundation York 10k, with the top three women all V35 or above at this hilly city centre event. Victory went to Wakefield’s ever green Julie Briscoe in 35:54, with Peterborough AC’s fast improving Maggie Skinner scoring a big PB when she crossed the line in 37:35. St Edmunds’ Pacers athlete and now a V45, Angela Joiner-Handy, was third lady in 39:55, but that time tells us little about this former international star. Joiner-Handy has PBs of 16:23.87 and 33:30.27 for 5000m and 10,000m from the late 1990s, and represented England at the Kuala Lumpur Commonwealth Games in 1998.

The first man across the line was Liverpool’s Jamie Rutherford in 32:49, with Leeds City’s U20 Jake Callis putting up a good fight for both victory and eventually second place with a 33:00 result, just two seconds ahead of Exeter’s Callum Crawford’s 33:02.

Welsh international and 2:09:49 marathoner Dewi Griffiths blew the competition away at the Barry Island 10k when the Swansea ace took the win in 29:48, while the consistently excellent Elsey Davis from Bristol & West was a convincing victor of the women’s race in 34:37. The full report can be found here.

More GB internationals were in action across the pond in the States, with Callum Hawkins and Ross Millington fighting hard for top ten spots in the notoriously competitive Beach to Beacon 10k. Find out exactly where they finished in the full report here.

Young stars and potential future champions impressed this weekend at parkrun – the top 10 times can be found here.