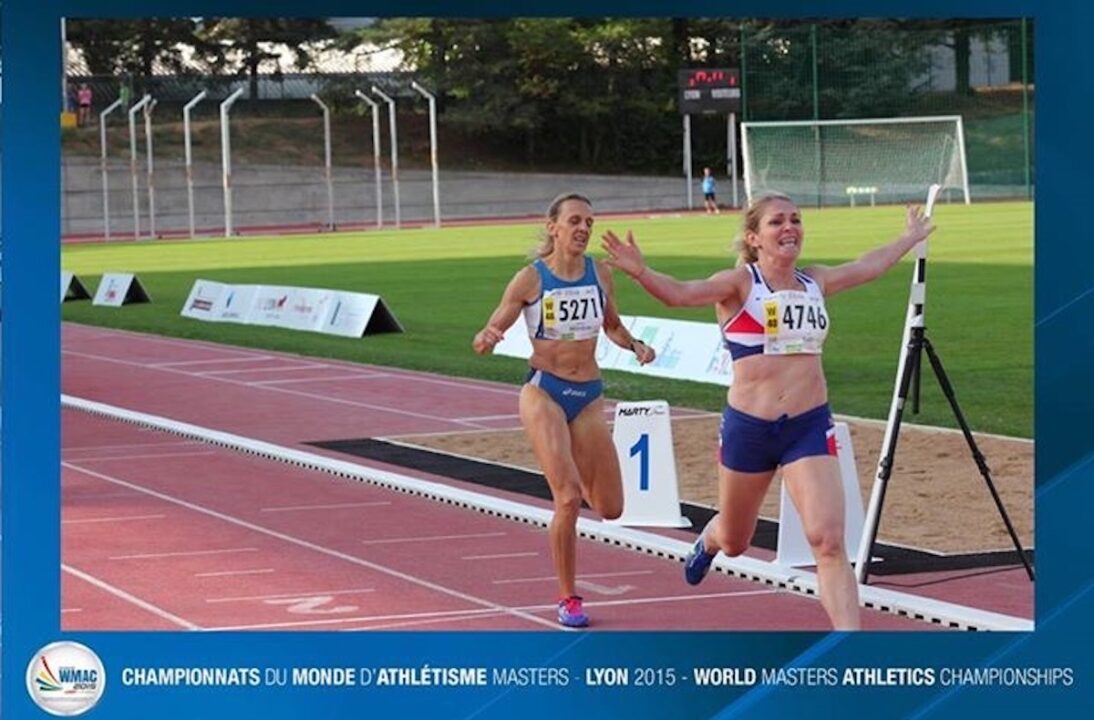 As eight women go to their marks for the final of the W40 800m, the woman sporting a Team GB masters vest whispers to herself – “If you don’t win the world doesn’t end” and instantaneously feels an inner peace and calmness take over her body.

As the gun goes and the athletes break from their lanes just over 100m into the race, the Stockport Harrier reminds herself, “You are an honest front runner”, so it’s no surprise that she finds herself at the front of the pack. They take the bell and she reminds herself, “Keep running as hard as you can”.

It’s all going to plan and then out of the corner of her right eye, a blue vest appears and the Italian goes past her with 300m to go, much to the animation of the French commentary team in the stadium. To all intents and purposes it looks as if the Northern Masters athlete then has a battle on her hands to come away with a silver medal as the Italian powerfully strides into the home straight.

With 80m to go that voice appears again in her head- it’s the one that told her less than two minutes ago that the world wouldn’t end if she lost. That voice was lying! Nothing else in the world matters at this point as her inner conscience tells her, “I’m not going to settle for silver” and with the crowd on their feet and arms outstretched and eyes looking towards the skies (think Sebastian Coe Moscow 1980), Louise Rudd stops the clock at 2:15.69 and is a world masters champion.

Just four days later a second gold over 1500m is duly delivered at the double and an insight into her sense of humour is that she will go on to rib her work mates about her success in having “Dame Louise Rudd” business cards made much to their amusement!

Any masters athlete worth their salt will tell you that, “Age is but a number”. Louise, who turns 46 in November is no different but she is perceptive enough to realise that chronological age is not necessarily correlated with biological age. Whist she jokes that, “I feel 70 odd some days with the knee niggles”, she asserts that she assesses she, “feels much younger- more like a 30 something year old, most of the time”.

Of course it’s equally naïve to say, “You are only as old as you feel”. Whilst matters of cognition are indeed important, there is a physiological side to the ageing process- call it nature if you will- which simply cannot be denied. Louise has always been active in terms of sports of some kind. Post University and looking to get back in shape, for instance she kick boxed (attaining junior black belt status) in her early twenties and this would have had tremendous gains in terms of her agility, balance and co-ordination. She also kept herself biologically ‘young’ through regular flexibility and circuit based training.

As well as the difference between her chronological and biological ages, its worth reflecting on her training age. Commencement at the age of 7 in track and field at first points to a training age of 40 odd years but closer scrutiny reveals a nine year break from track and field between the ages of 18-27. This means that she effectively has a training age specifically in athletes of three rather than four decades.

Significantly, thanks to the kick boxing in her twenties, she was healthy and ‘fight fit’ if not race ready in track and field terms. She enthuses that, “The kickboxing has stayed with me because they really honed in on your flexibility. Working the transverse plan of movement is good and something us runners tend to traditionally neglect”. This may in fact mean she can continue to compete as a masters athlete for longer than some because she has avoided the wear and tear of pounding the pavements for ten years, whilst maintaining a different kind of fitness.

In terms of her long term athlete development. Louise played both netball and basketball alongside her childhood foray into track and field. These two sports would have got her used to using all three energy systems as well as twisting, turning and jumping.

What is also significant about Louise’s training age is the fact that she was a late event group specialiser. Indeed when she dipped her proverbial big toe into the world of athletics courtesy of Sale Harriers, at the age of 7, she spent three years as a sprints based athlete, before moving into a middle distance based group at the age of 10. This will have been significant given the considerable alactic demands of the shorts sprints- typically 80 metres at her young age. This will have helped her to habituate some key biomechanical movement patterns which would have a transferable value much later in her middle distance track and field career.

Critically, even when she moved on to the middle distance training group at Sale and won a silver medal over 800m at the Northern championships as a U13, she still long jumped and ran in the 80m sprint final. This is long term athlete development at its finest and it’s not dissimilar to someone like the great Moscow Olympic 800m champion Steve Ovett, who could still operate effectively as a long jumper and 200m sprinter whilst running national age leading times over two laps.

Like many masters athletes with a significant training age in our sport, Louise has had and continues to struggle with persistent injuries. “I struggle with my back”, she confides, before clarifying that, “It all stems from an upper hamstring injury which seems to have a degree of permanency”. Perceptively she acknowledges that causation may not be related to her athletic activity but to the demands of wider lifestyle.

“I’m a rep for a pharmaceutical company”, she adds, “so I can spend all day sitting in a car, which doesn’t help”. As well as nurture, she believes some of this is down to nature as her father was a semi-professional football and she believes she has inherited his mesomorphic body type.

“I’m short and muscular like he was”, she says, before adding, “it does tend to make me a heavier runner so I have to be careful about impact injuries”. How does she manage these injuries? “I always do so kind of mobility drills, sometimes using hurdles before every run”.

Louise regularly sees her physio Chris Bramah at MHIP whether injured or not as this keeps her in one piece. Chris also sets her S&C based on what hers needs/weaknesses are.

Adjustments to frequency and intensity of training as a masters athlete

As recently as five years ago, Louise concedes, “I rarely took rest day and did lots of double days. That’s changed somewhat as I force myself to take days off and really only tend to do one double day per week”.

In terms of the intensity if her training she comments that, “My easy runs are ‘easier’ than they used to be as I’ve learned to ease back and I think terrain is important. I find running round grass like football pitches to help in terms of an active running recovery rather than pounding the pavements”. She effects specific S&C sessions twice per week as well as cross training through spin classes on the bike and then there’s the continued focus on flexibility with the yoga.

Louise offers significant insight when it comes to talking about her approach to training the specific energy systems, pointing out that, “I focus less on the lactate energy system unless it’s during the pre-competition or competition phases of the periodisation cycle. I’ve learned to time this much better over the years”.

She says that when she came back into the sport at the age of 27, she learned the importance of building her aerobic base before embarking on this kind of speed endurance work. It was the allure of the 2003 BUPA Great Manchester Run which caught her eye and she would go on to record an impressive 3hr 37mins in a London marathon, undertaken on four days a week training.

Regular attention to maintaining a solid aerobic base was maintained through the parkrun scene and through joining Wilmslow Running Club. So when did she make the decision to come back into the track and field fold?

“It was around the time of the Athens Olympics and Dame Kelly’s Holmes’ magnificent double that I began to hear of the masters concept and I really got a taste for it back then, I knew I was capable of running 800ms in just over 2m20s so at that point I joined Stockport Harriers because I wanted to run on the track once more and I hooked up with coach Dave Turnbull”.

So whilst the 800m has significant lactate energy system demands, Louise is careful as to when she stresses this system but points out that regular alactic work throughout the periodisation cycle is not uncommon. She concurs, “I do 6 x 15s strides a couple of times per week to help with leg turnover”.

Her aerobic base nowadays is developed typically through winter work involving tempo running. Typically she may start with 2 efforts of 3 miles and is progressed on to continuous runs of up to 8 miles.

In terms of competition, unlike a significant proportion of middle distance athletes, Louise tends to undertake cross country in the Greater Manchester League. This work which has obvious aerobic and strength endurance benefits is then superseded by a short indoor season on the boards between January and March, lactate predominant work in that pre-competition and competition phase of the periodisation cycle might involve sessions like 8 x 200m or ‘reverse pyramid’ work commencing with 1k and moving down to 800m/ 600m and so on. Even when effecting these mode of sessions, it would not be more than twice a week.

In addition she adds that, “Because the focus is on the quality of the work I’m undertaking in speed endurance terms, I tend to allow myself more generous passive recoveries between repetitions these days so pace can be maintained”.

So what does the future hold for Louise Rudd? “Well I’m not getting any faster!” she says with a laugh. Records and titles, however, still motivate her. “I’ll be focussing more on the 1500m and I can see myself moving to the 5000m eventually but ultimately enjoyment and health are the main focus”. She is now working with the duo of Eilish McColgan and Mike Rimmer and looking forward to getting back racing towards the end of the year.

1. Do I fully understand the differences between chronological, biological, training and competition ages and how these will impact my performance as a masters athlete?
2. What am I doing as a masters athlete to continue to work on my foundational and fundamental athlete development?
3. How, like Louise, am I continuing to work on my agility, balance and co-ordination?
4. Why might it be pertinent to revise both the frequency and intensity of my training as a masters athlete as Louise has?
5. Where and why does rest figure in my schedule?
6. What is the root cause of my injuries and how am I actively managing them as Louise does?7. Why might it be smart to think more deeply about when to training the three different energy systems as Louise does at specific points of the periodisation cycle?

Matt Long is a Midland Masters Men’s Team Manager and an England Athletics Coach Education Tutor. He welcomes contact to discuss these ideas further at mattlongcoach@gmail.com

Benefitting from the student-athlete lifestyle
Jo Pavey will be ready