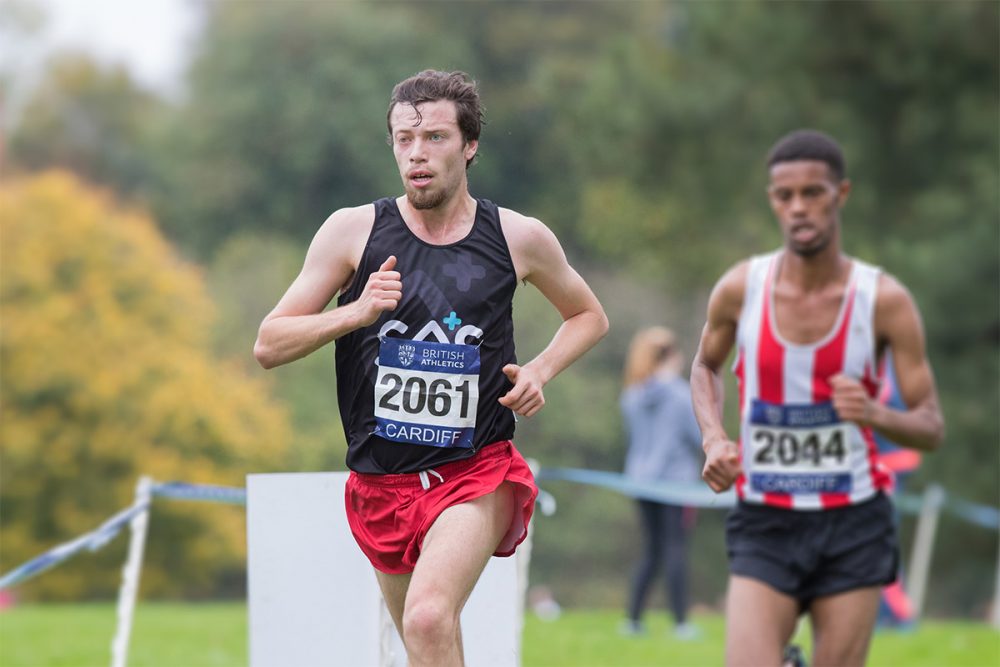 Sam Stabler ran a 13:45 PB to finish third at the Armagh International 5k in February, but how did the down to earth 26 year-old achieve that time?

We took a peak into the Wreake & Soar Valley star’s training diary and asked him how he manages to bounce back so spectacularly after injury.

As we found out in our first interview with Stabler, the Lamar University graduate has not enjoyed a smooth ride in his journey to world class race results.

The joint-fastest 5k runner in the UK this year (tied with Inverclyde’s Adam Craig, who just headed Stabler in Armagh) reveals his result came in the middle of his second biggest ever training block.

“I’m not sure on the stats but I’ve done loads of tempos, hills and miles,” he says joyfully. “I’ve also probably managed to limit cookie dough and cheesecake to a record low.”

How did the Rob Denmark-coached athlete reach the heady heights of peak fitness after such a relatively short build up?

When the Leicestershire-based runner started back training following his last lay off last autumn, he started off with the basics.

Five weeks of base training with some tempos and 4 – 8 minute reps totalling 30 minutes each time made up the majority of his build up.

Then, leading up to the Belfast Cross Country International in January and the Armagh 5k in February, he built up gradually to enable him to average 90 miles a week for an eight week block. “A mileage PB for me too!” he says with a wry smile.

Stabler’s training during the eight weeks before his 13:45 5k in NI looked like this:

Stabler’s coaching set up and talking to pigeons

““I really enjoy the group environment,” he agrees. “I had tried training on my own but hadn’t enjoyed it. It got to the point where I started to talk to pigeons in between reps..!

“Rob has helped me a lot since coming back to England from America. He usually times my sessions or jumps on the bike for the odd tempo. We generally do some sort of training once or twice a week, except when he’s on trips.”

Despite Stabler’s descent into solo training madness with his pigeon chats, like most of us he still has to train alone for much of the time.

He’ll jump at the chance to run with others, though.

“I mainly train in Loughborough, but I do sometimes drive 20 minutes out of town to the Cloud Trail, as it’s downhill both ways and there isn’t any wind there,” he reveals.

“I’ll run with the girls in the group when the session fits, and sometimes train with my ex-housemate Judas – sorry, I mean Joe Wilkinson (Lincoln Wellington’s 30:16 10k ace).

“I’ve also linked in with my other house mate Jamie Egleston when he isn’t marathon training.”

As ever Stabler is modest in his estimations of his abilities, and keeps it simple when questioned about his competitive aims for 2019.

“My main plan is to keep training with lots of focus on the core and stretching,” he explains.

“If my back is feeling ok in a few weeks’ time I will look to do a track race.

“If I can then make it to the Highgate Harriers’ 10,000m or the outdoor British Champs injury-free then that will be an achievement that I haven’t made before!”

Tell us one secret about yourself…

It’s rare when you get to interview an athlete so open about his cookie dough and cheesecake addiction, mid-session pigeon chats and snot-rocket attacks (see previous article!).

Surely Stabler’s juggling of a junk food diet, his ornithology interests and questionable nose blowing techniques are the sum total of this brilliant athlete’s quirky interests outside improving his running PBs?

But no! It appears not..

“I can imitate a raptor, but ever since I enacted my raptor impression in a video interview (on YouTube) it’s been played back to me over and over again!” he says with an audible eye roll.

Whether Stabler’s alone in his ability to imitate terrifying birds of prey is unclear, but what is certain is that this athlete is nowhere near finished with making an impression on the world of elite athletics.