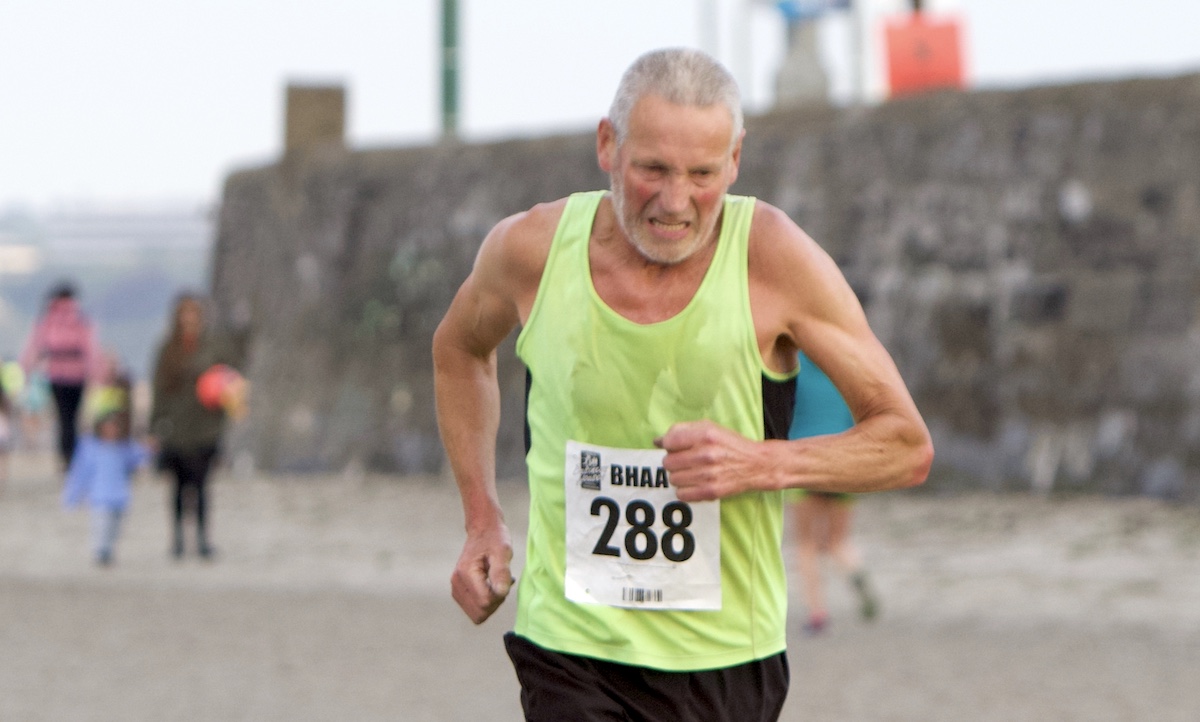 Lindie Naughton brings us an insight into the marathon filled life of Dave Brady.

At Saturday’s Dingle Marathon Dave Brady of Raheny Shamrock AC completed his 1,002nd marathon finishing first M70 in 6:12.20 — not a bad time for a course which is far from flat.

Exactly six days earlier, Brady had finally managed to complete his 1,000 marathon challenge in Longford, although, for some reason, his name didn’t appear in the provisional results. Then on Wednesday in Dublin, and just for good measure, he ran a 1,0001st marathon in Clontarf just for good measure. Running with him was Colette O’Hagan from Dundalk, another multi-marathoner.

Brady’s original plan had been to complete his thousandth marathon in the 2020 Dublin Marathon a month or so after his 70th birthday. Although most of the races he ran were local, the international lockdown scuppered his plans.

For a time, he thought he might make it before his 71 birthday, but that didn’t happen either. He’s the first to admit that — like so many of us — he didn’t find the lockdown period easy. Since he started running aged 36 in 1986, his life had revolved around his job in construction and his regular runs in anything going – BHAA races and hill races, as well as longer races on the roads.

Where did it all start?

When he turned out for the Sport Aid 10km in Dublin’s Phoenix Park after hearing an appeal from Bob Geldof on the television, he finished in a respectable time of 42 minutes. Since then, he had rarely stopped. He ran his first Dublin Marathon later that year and then the Belfast Marathon the following May. Never content simply to get around the course, he reduced his personal best time for the distance to 2 hours 52 minutes.

Despite that, as he got older, Brady got into the habit of running several marathons each year and notched up his 100th finish at the 2007 Dublin Marathon. With an increasing number of marathon and ultra races on the Irish calendar, he found himself running up to (and over) two marathons a week; in 2014 alone, he ran104 marathons.

By June 2017, Brady was clocking up his 650th marathon in Cork, where he ran a time of 4:33.13, admitting that any time under five hours was now good for him. Although a pensionable 66, he was still working with his old pal — and fellow runner – Ciaran McGrath on the buildings. He reckons that it was job in construction that has kept him healthy, strong and injury free down the years. When the numbers start to pile up…

Meeting him after the Lap of the Gap in Co Wicklow in late May, Brady was unsure whether he’d run 979 or 980 marathons up until that day. He had struggled to regain his motivation. “When the first lockdown came, I kept training, but when the second one hit, I started wondering why I was bothering training with no races to go to; like, in December, there used to be loads of marathons.”

His fitness had suffered. “I’ve lost a of my fitness and, getting older, the legs don’t recover the way they used to. But I’m getting back into it.”

Indeed he was. In that week alone, Brady had run three marathon distances — a 50km the previous Saturday and a mid-week marathon with his East of Leinster Marathon pals on the Wednesday.

“I’ll be happy to make the thousand even next year,” he told us. “We’ll see how it goes. I need a few multi-day marathons.”

A week after came the Cork Marathon where Brady finished in 6 hrs 56 mins. Mid-week marathons in June and July were notched up. His favourite multi-day-day race — the Donegal Quadrathlon —in early August added four more to his total and meant that his thousand marathon goal was again in clear sight.

With no fanfare or publicity, Brady headed for Longford on Sunday, August 28. When he crossed the line, he celebrated with a big grin and a wave. And then he went home to Rathcoole, Co Dublin and thought about the next race.

Long may he flourish!