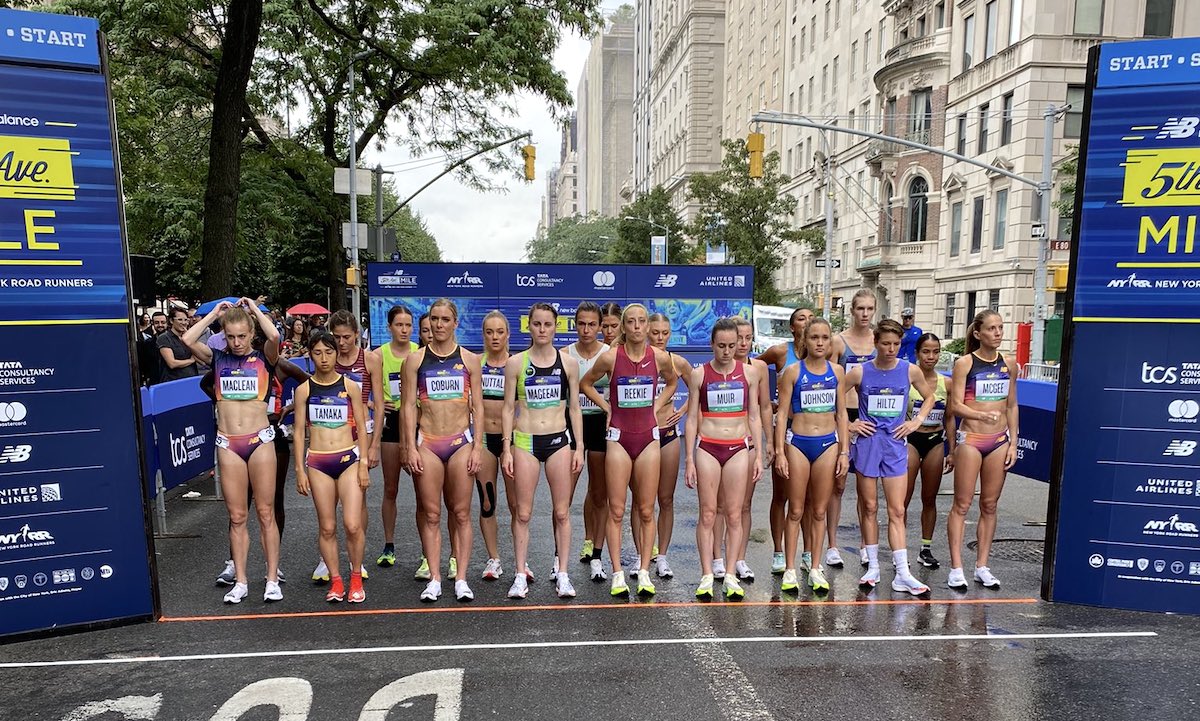 Another fine weekend of results for Irish athletes, whilst Paul Tierney started a race on Friday and is still going strong. Lindie Naughton reports.

Ciara Mageean rounded out her best ever track season in some style when finishing second in the 1500m at the Diamond League finale in Zurich on Thursday evening (September 8).

Race winner was double world champion Faith Kipyegon of Kenya, who was taking the Diamond League title for a third time. As a long season drew to a close, Kipyegon’s time of 4:00.44 was well below her best and the same went for Mageean. She finished in 4:01.68 — well off the Irish record time of 3:56.63 she had run in Brussels less than a week earlier.

Mageean then flew off to New York, where she lined out in the Fifth Avenue Mile – a race sponsored by New Balance, for whose professional team she runs.

Not entirely surprisingly, it proved a race to far for Mageean, who finished well down in 17th place with a time of 4 mins 30 secs. Ahead of her, a revitalised Laura Muir, who had seemed to be suffering the impact of a long season in Zurich, was not only winning but setting a new course record of 4:14.8.

In the men’s race, Andrew Coscoran was Ireland’s only representative and he finished a fighting 15th in 3:55 only a week after running a personal best time of 3:35.43 for 1,500m in Padova.

Saturday at the races

Yared Derese of Carrick Aces and Kate Purcell of Raheny Shamrock AC were the winners at the Ratoath Half Marathon, held at Fairyhouse Racecourse in Co Meath on Saturday (September 10).

Derese’s course record time of 65 mins 29 secs gave him a clear victory over Dunboyne AC’s Peter Somba who finished second in 69:07. Third in 70:16 was Paul Moloney of Mallow AC.

Purcell, fresh from her W35 silver medal at the World Masters Mountain Racing Championships a week earlier, finished in 78 mins 1 sec. Sarah Baryga of Sli Cualann AC was second and first W40 in 81:36 and Denise Toner of Clones AC third and second W40 in 82:16.

The race incorporated a national championships for teams of three, with the Raheny Shamrock women and the Crusaders AC men taking the senior titles. In the over 35 category, the winners were the Brothers Pearse AC women and the North Sligo AC men, while in the over 50 class, the Mayo AC women and the Grange Fermoy AC men came out on top.

More racing on the roads

At the Lakes 10km in Blessington, Killian Mooney of Dundrum South Dublin AC was the winner in a time of 31 mins 57 with Gillian Clyne first woman in 40.21. Out in force for the 5km race was the O Gibne clan of Drogheda-based Ace AC with Ruarcan beating his brother Oisin for victory in 17 mins 34 secs and sister Caer fourth and first woman. Slightly further back was mother Sinéad.

Winners at the Dromiskin 5km, Co Louth on Saturday evening were Hiko Tonosa of Dundrum South Dublin AC in 14:35 and Michelle Finn of Leevale AC in 16:21. Both athletes train with the Dublin Track group.

In Roscommon, at the Ros Run Half Marathon, Peter Kehoe of Roscomon Harriers was the winner in 82 mins 57 secs, with Sarah Keane of Abbeyknockmoy RC first woman in 97:46. Making it a Roscommon Harriers double in the 10km was Adrian Smith who finished in 35:21. Fourth and first woman in 41:01 was Emer Gaffney of Athlone IT AC.

Finn Valley AC’s Joanne Campbell, was first home of the women in 42.46, followed by Caroline Ward of Tir Chonaill AC and Nancy Mc Namee of Ramelton.

On a wet and miserable Sunday, Colin Coyne of St Abban’s AC won the Medic Half Marathon in Monasterevin, Co Kildare with a time of 76 mins 4 secs. Jennifer O’Sullivan was first woman in 88:30.

David Spalding of Ballydrain Harriers was the winner of the Portaferry 10km on Friday (September 9) in 33 mins 12 secs. First woman in 41:20 was Katie McKittrick of Willowfield Harriers.

Robbie Hagen clocked a time of 5 mins 31 secs to win the Mill Hill Mile in Annsborough on Tuesday (September 6) . A close second in 5:34 was junior athlete Tom Crudgington of Newcastle and District AC, followed by Oliver Robinson, another junior, of East Down AC.

Joanne Mills of Newcastle and District AC was first woman in 6:51, followed by Newry AC junior Eve Welsh in 6:59 and Claire O’Rourke of Murlough AC in 7 :25.

At the corporate Grant Thornton 5km, held in Cork city on Tuesday, Andrew Hobbs of Johnson Controls was the winner in 16 mins 39 secs, with Siobhán Hoare of Grant Thornton first woman in 18:50. Team winners were O’Mahony Pike Architects. Zak Hanna was in Spain over the weekend, where he finished second in the Canfranc Vertical Kilometre behind emerging Spanish mountain runner Daniel Osanz on Friday (September 9).

Hanna and the Kenyan Philemon Kiriago lead from the start of the 4km race but were caught by Osanz, who took the lead just before halfway and pushed on to win in 34 mins 29 secs.

A surge from Hanna saw him catching Kiriago in the later stages of the race to finish second in 35 mins 7 secs. A day later, Kiriago finished second in the classic 16km race.

In the Aosta Valley, Italy, Paul Tierney started the Tor des Glaciers 450km race on Friday last week, and is still going as we write. After over 60 hours, the jovial ex-hurler is in fourth spot and well known for finishing strong in the second half of these mountain epics. Hopefully he’s done in time for next week’s round-up.

Tracking can be found here: https://torxtrail.com/en

At the Providence Friar Cross-Country Invitational, Attleboro, Massachusetts on Friday (September 9) Laura Mooney of Tullamore Harriers fourth in the women’s 5000m race in 17:49.6 , followed closely by Niamh O’Mahoney of An Riocht AC, in her freshman year at Providence College, in 17 mins 50.4 secs.