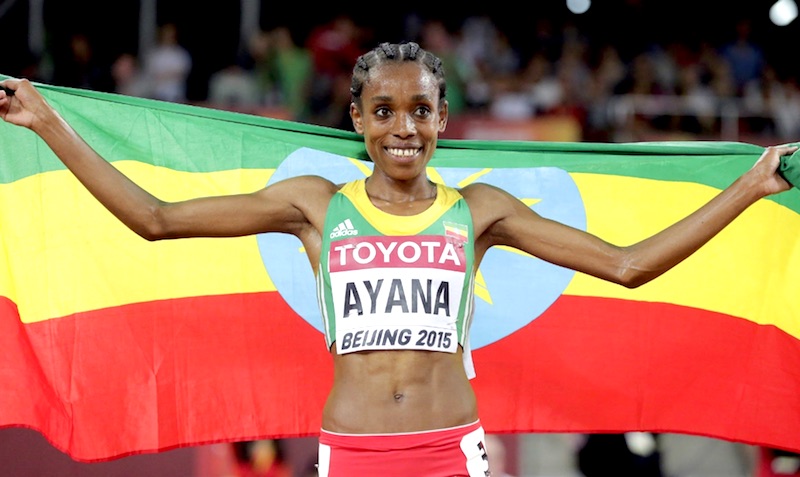 Almaz Ayana’s debut over 13.1 miles at the Delhi Half Marathon is in doubt due to rising pollution levels in the Indian capital.

Ayana, the world 10,000m champion is scheduled to make her debut in the half marathon in Delhi on November 19. However, due to rising air pollution levels in the city, the Indian Medical Association has called for the “immediate” cancellation or postponement of this year’s event.

In some areas of the city, pollution levels are 30 times the World Health Organization’s recommended limit.

On Monday, the IMA wrote to Delhi Chief Minister raising its concerns about the half marathon going ahead – which is expected to see more than 34,000 participants take part in the different events. The IMA urged organisers to move the race to later date when the air quality improves.

“The organisers of the Delhi Half Marathon have a duty to take into consideration the air quality at the time of the marathon so that no runner suffers any adverse health effects because of exposure to hazardous levels of air pollution,” said the IMA.

Anticipation has been building to see if Ethiopia’s Ayana, who shattered the 10,000m world record at the Rio Olympics in 2016, could transfer her stunning times to the half marathon distance.

Following the IMA’s concerns about the rising air pollution and safety of this years event, Bharti Airtel, the title sponsors for the last 10 years have threatened to pull out of future editions unless Delhi’s government urgently address the situation.

In a statement, the company said: “Air pollution poses serious health risks and it is important that these concerns are addressed urgently and appropriately by the authorities for Airtel to continue associating with the event next year and beyond.”

“We have received a lot of feedback from our customers and citizens at large expressing concern on holding the marathon in view of the prevailing air pollution in the city.”

The organisers Procam initially declined to comment but following growing pressures released a statement of their own calling the demands for cancellation or postponement as “shortsighted and misplaced.”

“The Airtel Delhi Half Marathon is inherently a panacea for the pollution issue plaguing Delhi,” said the organisers in their response. “The Race Day keeps cars off the designated 21kms of the city, and salt mixed with effluent treated water that is used to wash the course, ensures that the dust pollution is negated making the Race Day a far more conducive environment for running.”

“It has been scientifically established that runners and people with active lifestyles are better suited to be able to deal with the ill effects of a polluted environment and are known to have better immunity,” added Procam.

Also scheduled to compete is world champion Geoffrey Kirui. Kirui, who won the men’s marathon at the World Championships in London this summer, set his current personal best of 59:38 in Delhi two years ago.

The president of the Athletics Federation of India (AFI) Adille Sumariwalla, has also said that the half marathon should go ahead as planned.

Sumariwalla said to the India Times: “(If) Beijing, which is the most polluted city in the world, can have Olympics, what’s wrong in having a marathon in Delhi?

At the present moment, the half marathon has not been cancelled or postponed. However, the government has today (November 9) announced plans to reintroduce car rationing to try and curb the levels of pollution.

From the November 13 to 17 privately owned cars with even and odd number plates will only be allowed into Delhi on alternate days and further developments between now and November 19 could determine the fate of the half marathon.