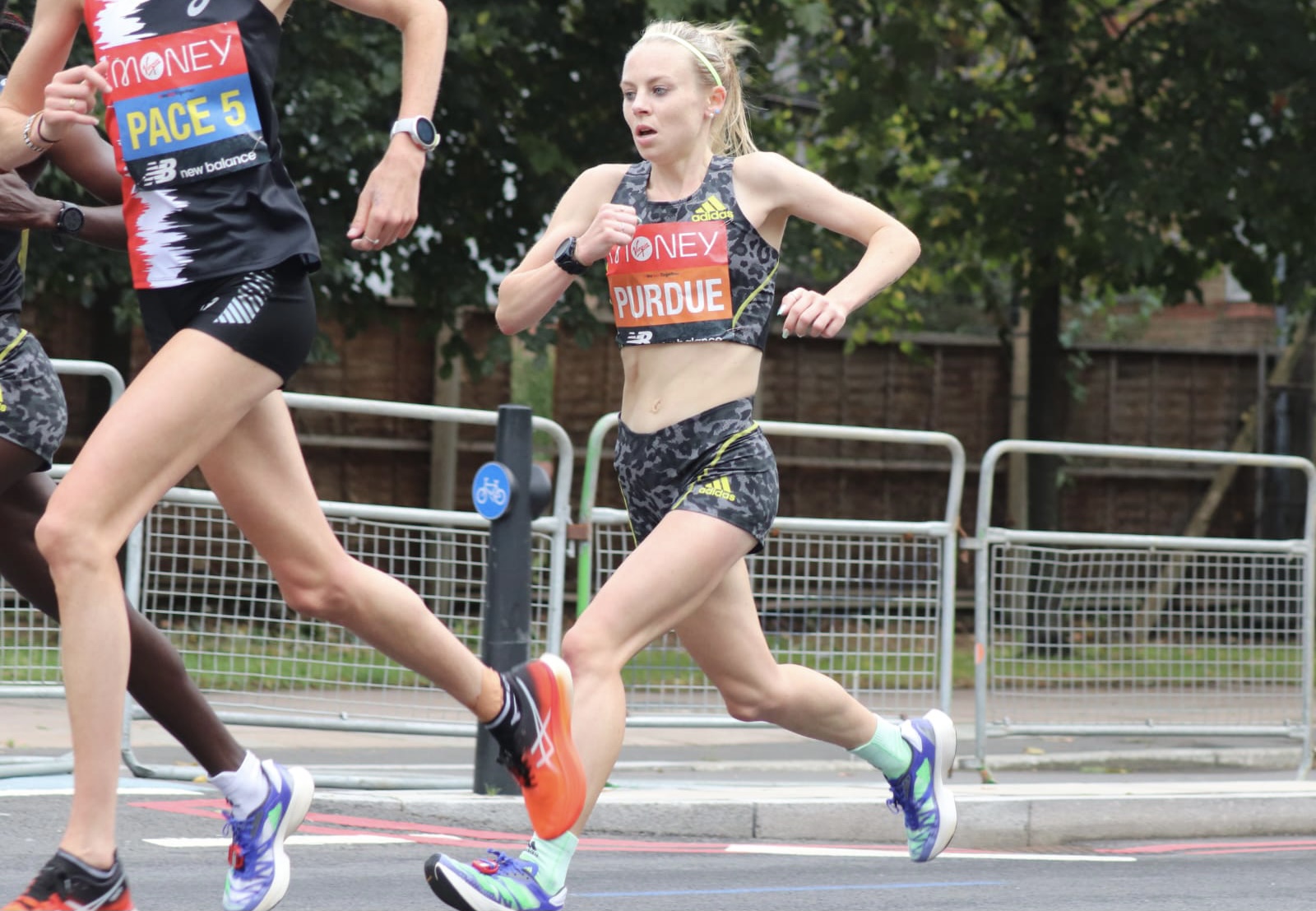 I am going to start this article with a simple question. How good is it to see marathon running back on the streets of London? For me personally, it is one of my favourite weekends of the year, and I’ve been involved or cheering on the side of the course since 2005, with this year my first as an accredited media representative.

That’s enough about me. Straight to the elite races.

The women kicked off the action with a stellar field including World Record holder Brigid Kosgei, 10km World Record holder Joyciline Jepkosgei (although that WR was broken whilst she was racing today!) and Lonah Salpeter, the seventh fastest woman in history, alongside a high-quality domestic field headed up by Charlotte Purdue.

The first half saw a large pack go through 5k in 16:21 and 10k in 32:43, with ten athletes crossing through halfway in 68:51, unprecedented depth at this stage of a marathon.

The pack thinned over the following miles, reduced to five by the 35km point, led by Joseline Jepkosgei in 1:53.57 as the New York Marathon winner made a break for the lead. That split was just one second shy of what Mary Keitany ran in her 2:17.01 time, which stands as the women’s only World Record.

Whilst the pace slowed, it turned out to be a decisive by Jepkosgei who continued to move away from those behind her. She crossed the line in 2:17:43, a significant lifetime best that moves her to seventh on the all-time list. Although Keitany’s women-only WR lives another day, the race was a history-setting marathon, being the first time five women have finished in under 2:19. Behind Jepkosgei, there were PBs for the two Ethiopians who completed the podium, Degitu Azimeraw (2:17:58) and Ashete Bekere (2:18:18).

Brigid Kosgei finished fourth in 2:18.40. A shout out to Shalane Flanagan who, just seven days after running 2:38 in Berlin, finished in 2:35:04 from the mass start.

Charlotte Purdue was an athlete with a mission. Having missed out on selection for the Olympics in Tokyo, the Aldershot, Farnham & District athlete made her goals for the race clear – try and better Mara Yamauchi’s PB to go second on the all-time list.

Having been paced by Eilish McColgan for the first half, which was reached in 71:44, it became a lonely run for Charlotte; however, she rallied to both pick up the pace and catch up the those dropping off in front of her. It was certainly a mightily impressive run, clocking 1:43:31 for 30km and 1:58:30 for 35km. Her pace slowed ever so slightly in the closing kilometres, but crossing the line in 2:23:26 saw Charlotte take over two minutes off her lifetime best to reclaim third spot on the UK all-time list, falling just 14 seconds short of Yamauchi’s best.

Behind her, there was a PB of over a minute for Clapham Chaser Rose Harvey (2:29:45) which rewarded her with thirteenth place and second British across the line. She was followed by Samantha Harrison in just her second marathon after Manchester in 2019, who’s 2:32:22 is a 19 minute PB. Natasha Cockram finished fourth Brit, just 10 seconds back with 2:32:32. Becky Briggs, whilst also losing a little time in the second half will likely be pleased with her 2:34:34 – a strong showing after her difficult debut in Kew. The next British finisher was actually off the mass start, as Chloe Richardson with a fine debut performance of 2:37:08.

Fast Running by the Men, too

The field may have been missing four-time London Marathon winner and World Record holder Eliud Kipchoge, but that did not mean the quality on show was any less.

Seven men have run under or match 2:03 in history, and four of them took to the Greenwich start line, alongside a further two sub-2:04 athletes.

The leaders went out as fast as expected, reaching 10km in 29:13 and halfway in 61:26, although reigning champion Kitata had fallen off the pace before the 5km point.

With no clear leader, the group went through 20 miles in 1:33.45, running at a similar pace as Eliud did when setting his 2:02:37 course record. Once on The Embankment Ethiopian Sisay Lemma, who finished third in the elite-only race last year and did not finish in Tokyo eight weeks ago, put a decisive break in to build a clear gap on the others.

Much like Jepkosgei in the women’s race, this turned out to be an unassailable move, seeing him cross the line in 2:04:01, 27 seconds ahead of Vincent Kipchumba  seconds clear of third placed Mosinet Geremew.

The domestic field was headed up by Jonny Mellor, returning after injury ruled him out of the Olympic marathon trials in March, alongside Mo Aadan, Josh Griffiths, Andrew Davies, Matt Leach and Weyney Ghebreselassie.

Three British men were making their marathon debuts in the elite field; birthday boy Phil Sesemann, Jordan Crowe and Doug Musson. It has been quite a year for Sesemann, starting out with an indoor track season including the 3000m at the European Indoor Championships. Fast forward seven months and the Yorkshireman has since run a 62:47 half marathon as he transitions to the roads.

About 80 minutes into the race, Sesemann started to move ahead of the other leading Brits, and that was not a position he relinquished with the help of the self-titled ‘marathon maverick’ Jake Smith on pacing duties. Jake’s help was clearly appreciated, with Phil running well inside the World Championship qualifying standard of 2:11:30, it was certainly becoming a debut to remember. However, Phil learned the hard way how the last part of a marathon can feel (whilst much slower, I can definitely sympathise!), with a tough last few kilometres along the Embankment where his pace considerably slowed, by about 5 seconds a mile. He hung on, however, to cross the line in seventh in 2:12:58, a mighty fine debut. Josh’s dad was also running, with the pair attempting to break Tommy Hughes’ father-and-son World Record for the quickest combined marathon times. They fell less than a second short, sadly. The day’s action had started with the elite wheelchair races, where Swiss duo Marcel Hug and Manuela Schar both broke the course records with 1:26:27 and 1:39:52 respectively.

Hug, who won four golds at the Paralympic Games, including in the marathon, broke away from 2019 London winner Daniel Romanchuk just before the halfway point and took a considerable chunk off the previous course record set by Kurt Fearnley in 2009. David Weir finished third.

When 7 out of 10 is perfect
Best of the rest