Into the mountains again 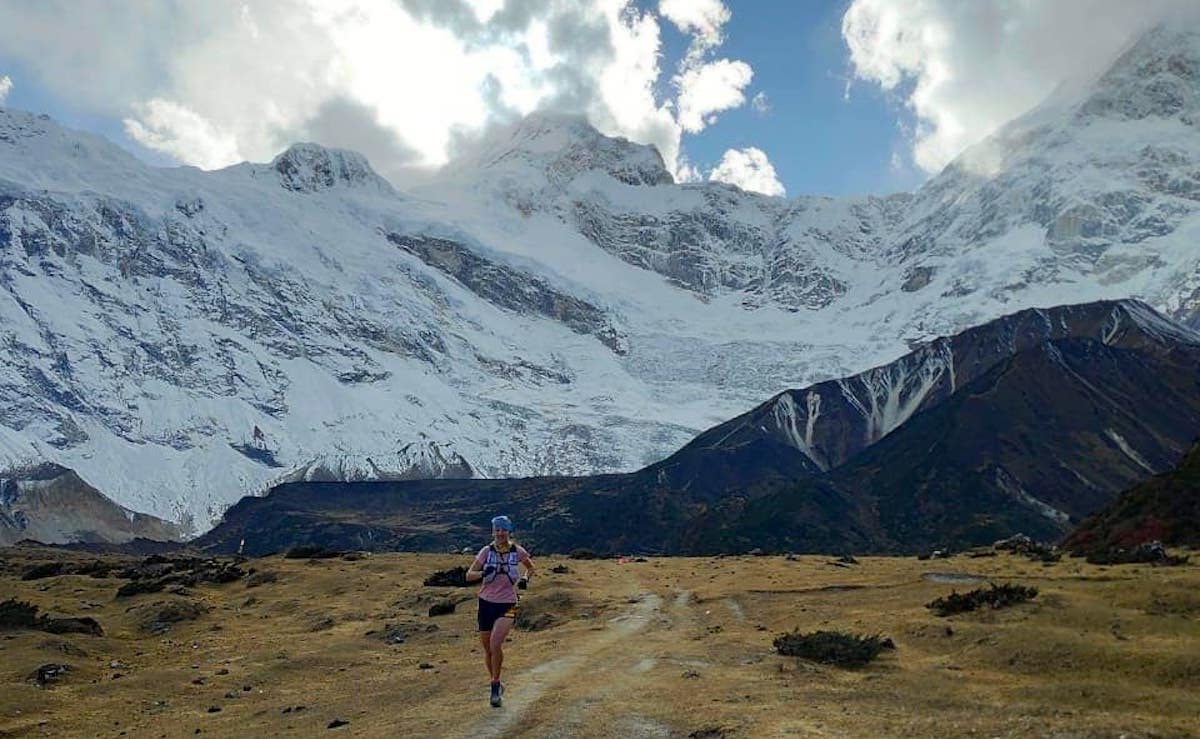 In her latest Fast10 blog Holly Page continues to race more often than a…. we’re not really sure of anyone or anything who races quite as often as Holly. Catch up on the latest adventures below.

5am. I can see the headlights of a waiting car outside but seem to be locked in a guesthouse. I stumble around in the dark trying to find someone to open it. “Namaste, Namaste”, I call as I find a sleeping security guard and try to shake some life into him. Bleary eyed, he comes to the rescue, opening the door and allowing me to start my journey to Manaslu Mountain Trail Race.

A long bus ride to a bridge to meet the rest of the runners. Patchy phone signal. Turns out it’s the wrong place. Flagging down a dusty lorry, we hitch a ride to the right bridge 20km downstream and sit and wait for the bus of cheery folk on their way from Kathmandu.

We’re greeted with friendly faces and delicious oranges from the event organisers as we make our bumpy way to the race start village.
Manaslu Mountain Trail Race is a nine day stage race, though stages seven and eight are “hiking” days and don’t count in the overall results. It’s just over 190km with over 11,000m of climb.

The race is organised by Richard Bull and Lizzy Hawker, pioneers in the promotion of trail running in Nepal, putting on various events throughout the year, for the right reasons; low-key, non-commercialised and with a focus on giving back to local communities.

Five star service in the mountains

The race is supported by a team of cooks and a mule train, which means that not only do you need to carry just your “day bag”, you wake up to a cooked breakfast of eggs, pancakes, porridge, endless tea and coffee… there’s a packed lunch, a hearty hot soup waiting at the finish line each day, afternoon tea at 4.30pm and then a seemingly bottomless amount of food at dinnertime. Needless to say I think I actually put on weight during these nine days rather than losing anything!

Although conditions in Nepalese mountain villages are certainly “basic”, it felt like a total luxury compared to my experiences on the previous week’s Dhaulagiri trek and Annapurna mountain bike ride where I’d been carrying everything myself, including melting snow on the glacier drinking water.

Toeing the startline on the first day I was a little apprehensive as to how my (hopefully no longer fractured) foot would cope with the inevitable stress it would be put under. I hadn’t run a step for a month. I had my poles at the ready and a non-competitive mindset. I had to remember what a privilege it was just to be there, running in such places is such a luxury.

Most people in the mountains are subsistence farming and wasting energy through running would understandably be considered a frivolous endeavour for them. Uphill from the start

We began by winding our way up the Budhi Gandaki valley, almost 4,000m of climb and 2,500m descent over the first two days, so it wasn’t entirely uphill! Due to the linear nature of the event, there were no cut-offs, and so people could take as long as they needed on each stage. After a quick river wash (at least at the lower elevations!), it was fun to cheer everyone on as they came into the finish line throughout the afternoon every day.

There was a wonderful community feeling amongst all the participants; being with a small group means there’s real opportunity to properly get to know each other; as one of the guys said “it’s like ten years of friendship in nine days”.

By day three it felt like we were really in the mountains, views of Manaslu appeared and the culture became more Tibetan. Running up to 4,700m in my shorts and T-shirt in horrible snowy conditions was a little on the chilly side but otherwise we were really lucky with the weather.

After dinner each evening, we had a briefing by race organiser Richard, his dry sense of humour could land him a stand-up comedy gig if he wanted it, always managing to make jokes even when everyone else was feeling pretty tired! I’d picked up a stinking cold by the fifth day; far from ideal as we headed into the higher altitudes, but it didn’t dampen my spirits too much.

I even managed to gain some confidence in my foot and clocked the fastest time on four of the seven stages. It was quite a risk to even start the event as I could have done a lot of damage, but hopefully I’ve been sufficiently conservative to let it continue healing.

Nepal has always been a top destination for trekkers but the trail running scene is really taking off with events springing up across the country. For me the events that Lizzy and Richard organise (Manaslu in November and Mustang in May) really are something special; I’m coming away with the most wonderful memories and a strong desire to return to this beautiful country very soon! The “kid’s race” in Oman

I treated my foot to a whole week of doing bugger all exercise and stopped off in Oman, where I’d been invited to participate in the UTMB race there. Although my initial invite was for the 130 or 170km races, I said I would come for the 50km…”the kids race” as I liked to call it. Well, the kids race which is 53km with 3,400m+… I had hoped to be able to run it properly, but I knew that my foot was not fully healed yet and that’s a lot of descent in a pair of trail shoes…

So I donned my trusty waterproof hiking boots and a non-competitive spirit and crossed my fingers and toes that I would be okay.

I wasn’t exactly raring to go on the startline, I would quite happily have stayed in bed; my legs were so stiff when I set off, but I gradually got into the swing of things as I jogged merrily up the main climb.

Once the sun came out it became crazy hot, I felt a little bit like a poor lobster being thrown into a bubbling cauldron to be boiled alive, and the Gore-Tex shoes were wholly unnecessary in the desert!

But I had a nice time, working my way through the field as the overexuberant men started to fade with the demands of the course and despite stopping for lots of pictures and clomping around like a woolly mammoth in my boots, I ended up finishing 8th overall. I took the downhills very steady and my foot seemed to survive – hooray!

My watch informs me that I now need 120 hours of recovery, shame I only have about 100 until my next jaunt – a three day stage race in Patagonia. Then logistics, weather and foot pending, perhaps a little escapade up Aconcagua…