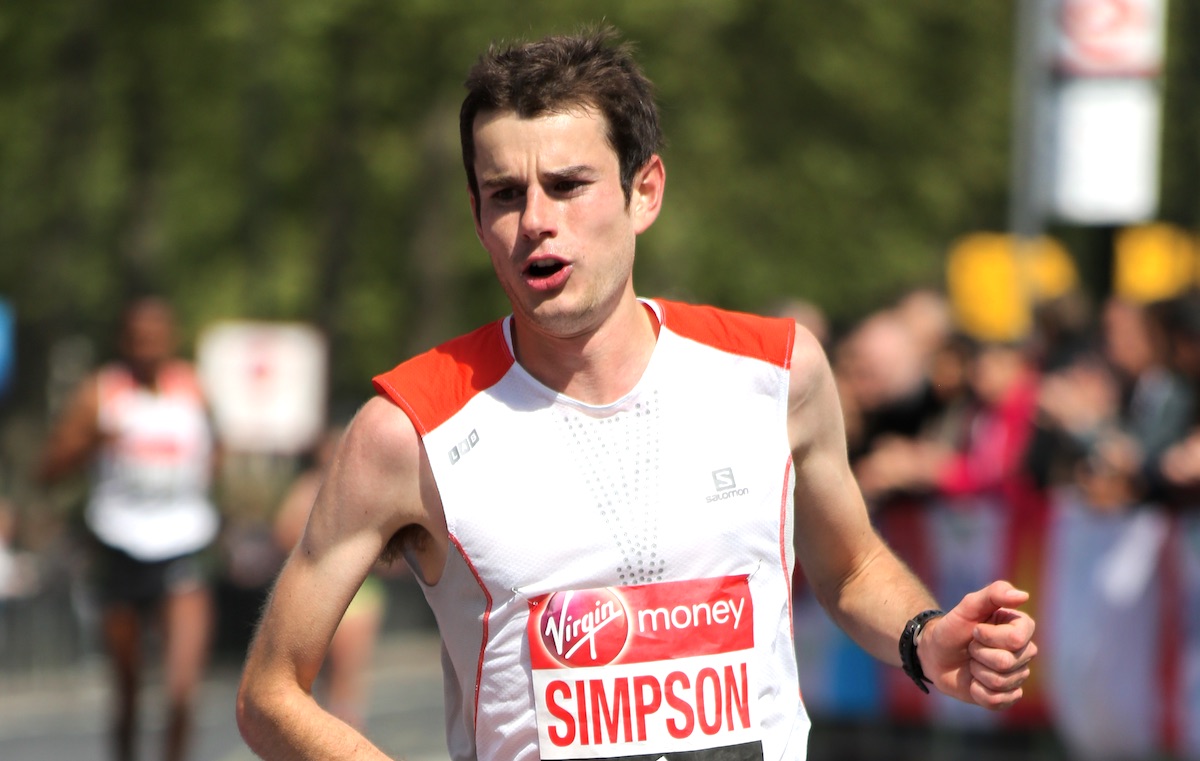 Robbie Simpson says he has to “run as fast as possible” at the Manchester Half Marathon on Sunday and “hopes it’s enough” to convince selectors he warrants a place on the Scottish team for the 2018 Commonwealth Games.

From a “major high”, finishing as the second British athlete at the London Marathon to a “major low” missing out on the World Championships due to injury, Simpson is all to aware of the rocky path you can have in running. Tomorrow that journey continues when he heads to Manchester hoping to post a fast enough time that convinces Scotland’s selectors he warrants a spot on the team headed for the Gold Coast next spring.

The 25-year-old, best known for mountain running, has enquired with Scottish officials how quick he would need to run but “they couldn’t really give an exact time,” he tells Fast Running. “I am just going to have to run as fast as possible and hope it’s enough. If it goes well and there is a good group of guys I feel like I can run a good time.”

Simpson admits he was “really disappointed to miss out on the World Championships” in what would have been his first GB vest in road running. His 2:15:04 time also achieved the standard for Scotland’s 2018 Commonwealth Games team, a silver lining now that he has recovered from the calf injury that alerted his summer plans.

However, the decision whether he is on the flight to the Gold Coast sits with the selectors, and with Olympian Tsegai Tewelde impressing recently with a personal best 63:14 at the Great North Run and third at the Great Scottish Run at the start of this month, there is a possibility that this form could prompt him to attempt the marathon standard before the end of this month, although it’s unclear what his intentions are at the moment.

“Tewelde’s running well and obviously in great shape, but I don’t know if he is targeting the Commonwealth Games are not, but there is a chance he could run the time before the end of October,” says Simpson.

It is understood that 20 athletes across all athletics events will be chosen, and most likely two but a maximum of three marathon places are up for grabs, one of which can almost be assured to Callum Hawkins, who finished fourth at this summer’s World Championships. And with his brother Derek, a fellow Rio 2016 Olympian, ruling himself out of any attempt after returning from a long injury, Simpson has every chance of making the team.

The Deeside runner, who has spent much of his running career off-road, representing Britain at numerous world and European Mountain running championships, was the underdog to earn a World Championships spot at the London Marathon, but finished ahead of many more established British road runners, only second to the tremendous debut marathon by Welshman Josh Griffiths.

“It was probably one of the best moments of my career,” says Simpson on his personal best performance in London. “Looking back now I think I could have ran even quicker because at the end I felt I had a bit left, but I was so happy to come through and finish second. After that, I was looking forward to having a real go at the World Champs and try to move up to the next level, but it wasn’t to be. But London was an amazing day, so hopefully, I have a few more days like that.”

While obviously disappointed to miss out on the World Championships this summer, the Scotsman is not one to dwell on his misfortune. “I have to take positives by not competing at the World Champs. I am from a mountain running background, so I tend to spend my summers competing in mountain races, and fortunately, while I couldn’t compete on the road, I was still able to run uphill, so I ended up spending my summer running a lot of uphill races. Even though it was gutting to miss out on the World Champs I still enjoyed my summer.”

When asked how his return to road running has gone, he says: “I wasn’t sure a couple of weeks ago how things were because I missed a lot of road training. I can feel really good after a couple of weeks or I mightn’t make too much progress, but thankfully it’s gone really well and I am feeling good.”

“I ran the Aberdeen Half Marathon at the end of August, and that was the first time I could properly run 21km on the road without any problems. I didn’t race Aberdeen at full effort, it was really just a test run to see how my calf was, and thankfully it was ok after that,” adds Simpson.

Following the Aberdeen Half, he then returned to Switzerland to defend his Jungfrau Marathon title, a marathon with a mixture of road, trails and mountains, finishing second this time around, but encouragingly after his injury improved on last year’s winning time, posting 2:58:49.

In September, the news also broke that Petro Mamu, who Simpson has finished runner-up to in many major mountain races and considered the ‘best’ mountain runner in recent years, was banned from the sport after failing drug tests at two major championships this year. The ban was reduced from two years to only 9 months because of the Eritrean’s ‘cooperation’.  Learning that you could have been denied numerous moments on top of the podium is difficult for any athlete and Simpson admits he’s left “wondering whether the guy who beat him into second place in many of the big mountain races was clean or not” in the other races.

But the mountains are still Simpon’s first love, it’s where he has enjoyed his most successful years, though this he “was keen to spend this year focusing just on road racing”, but his injury gave him the time to reflect on the training he was doing up to that juncture.

“Being injured really opened my eyes up to the way I was training, as it was quite intense, and actually I needed the mountains during the summer to break it up. The mountains allow me to keep my leg strength up and reduce the risk of injury,” he explains. “It works well for me doing both and I think over the winter I can really give road running a good go and then in the summer I can go back to the mountains. You lose a bit of speed, but at the same time I come off quite fit and strong.”

Looking ahead to Sunday’s Manchester Half Marathon Simpson is amongst the favourites to take the top podium spot.

“I think I have got a chance to win, but there are a couple of other good guys too. I would like to aim for 65 minutes so we will see where that gets me. Looking at the field there are a few guys who could possibly run that too or faster, he says.

Challenging Simpson, who has a 64:39 half marathon PB on Sunday will be Luke Traynor, making his debut over the distance. The Glasgow City runner clocked a 29:08 personal best for 10,000m this summer, while other strong entries include Jack Morris, Ben Fish and Richard Weir.

Following Sunday’s race, there will be an anxious wait before Simpson discovers his performance is enough to convince the selectors. He knows he “can’t be guaranteed a place” even if he wins, but regardless he intends to spend the coming months training for a marathon race.

“I just have to train away and hope I am picked,” he says, “but if it’s not to be I will  target another marathon, possibly London and hopefully have another good race.”