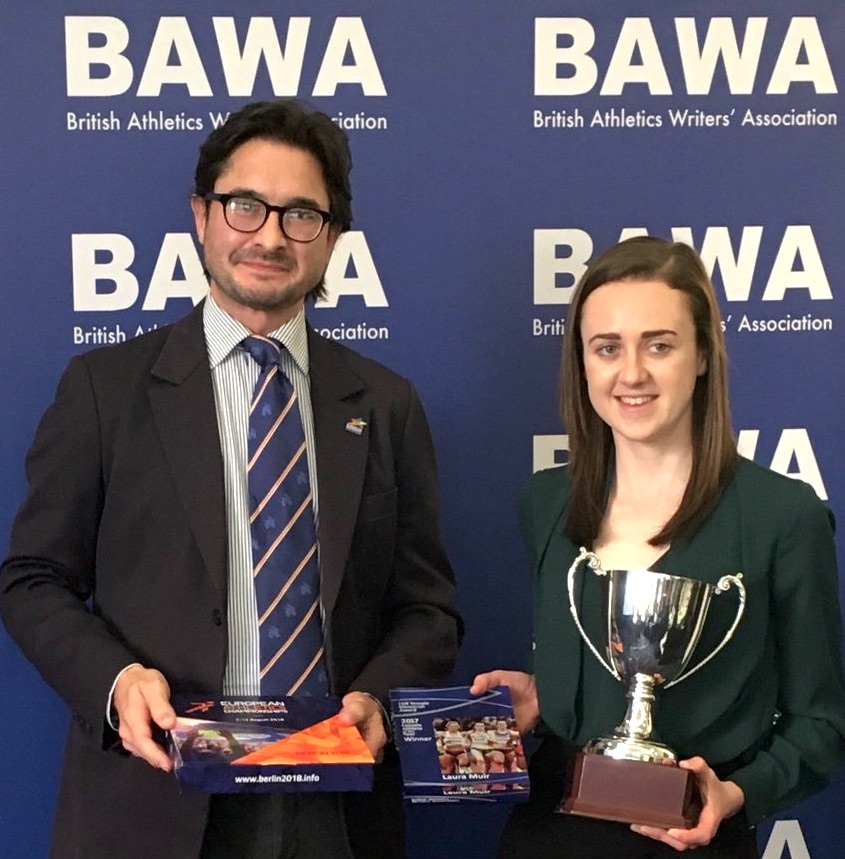 Mo Farah and Laura Muir have been named the UK’s Athletes of the Year for 2017 by the British Athletics Writers Association.

Farah, now a 10-time global gold medalist and Muir, who won two golds at the European Indoors received the honours at the BAWA Awards lunch in London on Friday (November 17).

Farah took the Male Athlete of the Year honour for a record seventh time following his final track season that saw the 34-year-old win the 10,000 metres at the IAAF World Championships in London in addition to victory in the Great North Run.

24-year-old Muir was named Female Athlete of the Year at the close of a season that saw the Scot claim double gold in the European Indoor Championships in Belgrade over 1,500 and 3,000m before finishing fourth in the 1,500m at the World Championships as well as sixth in the 5,000m.

While also completing her veterinary degree, she also claimed British outdoor records in the mile and indoors over 1,000m and 5,000m. Muir edged out Dina Asher-Smith and Asha Philip, two members of GB&NI’s 4x100m relay squad that took silver at the World Championships. And she revealed that chasing more glory at the 2018 European Championships in Berlin and the IAAF World Indoor Championships in Birmingham is on her radar.

“It’s exciting to have another home champs at world indoors,” she said. “I really love racing indoors. But for me, I don’t feel too much pressure on me for next year. I’m completing my final year of studies and that’s my big target. At the same time, I’m training really well. So I’ll want to go to the Europeans in Berlin and come home with a medal.”

Dame Mary Peters received The Ron Pickering Memorial Award for Services to Athletics for her work in providing opportunities in supporting talented young sportspeople and the community at large in Northern Ireland. The 78-year-old, who won pentathlon gold at the 1972 Olympic Games in Munich, continues to be active in her charitable Sports Trust that has assisted the likes of Graeme McDowell and Michael McKillop.

Jonnie Peacock waltzed his way to the Male Para Athlete of the Year award for the second successive time. The 24-year-old Paralympic champion, currently preparing for a Strictly Come Dancing outing in Blackpool on Saturday, regained his 100m T44 title at the Para World Championships in London.

Wheelchair racer Sammi Kinghorn landed the Female Para Athlete of the Year prize for the first time. The Borderer, 21, gained her maiden global titles with 100 and 200m T53 gold at the Para World Championships in addition to 400m bronze and a clutch of world records throughout the year.

High jump prospect Tom Gale won the Jim Coote Memorial Award for junior male athlete of the year following his bronze medal at the European Under-20 Championships and a string of strong showings amid senior competition.

The Lillian Board Memorial Award for junior women went to sprint hurdler Alicia Barrett who landed silver at the European Under-20s and also secured the British senior title over 100m hurdles.

Soon-to-be Dancing On Ice contestant Perri Shakes-Drayton skated to BAWA’s Inspiration Award, chosen in recognition of an athlete who has made an outstanding performance in a single event, performed well against the odds, or is retiring after a long and distinguished career.

Shakes-Drayton has battled back from a horrific knee injury sustained in the 400m hurdles final at the 2013 world championships in Moscow that left her requiring multiple surgeries which rendered the Londoner unable to compete again until 2016. This summer, the 28-year-old was part of the GB&NI 4×400 relay squad that took world silver.