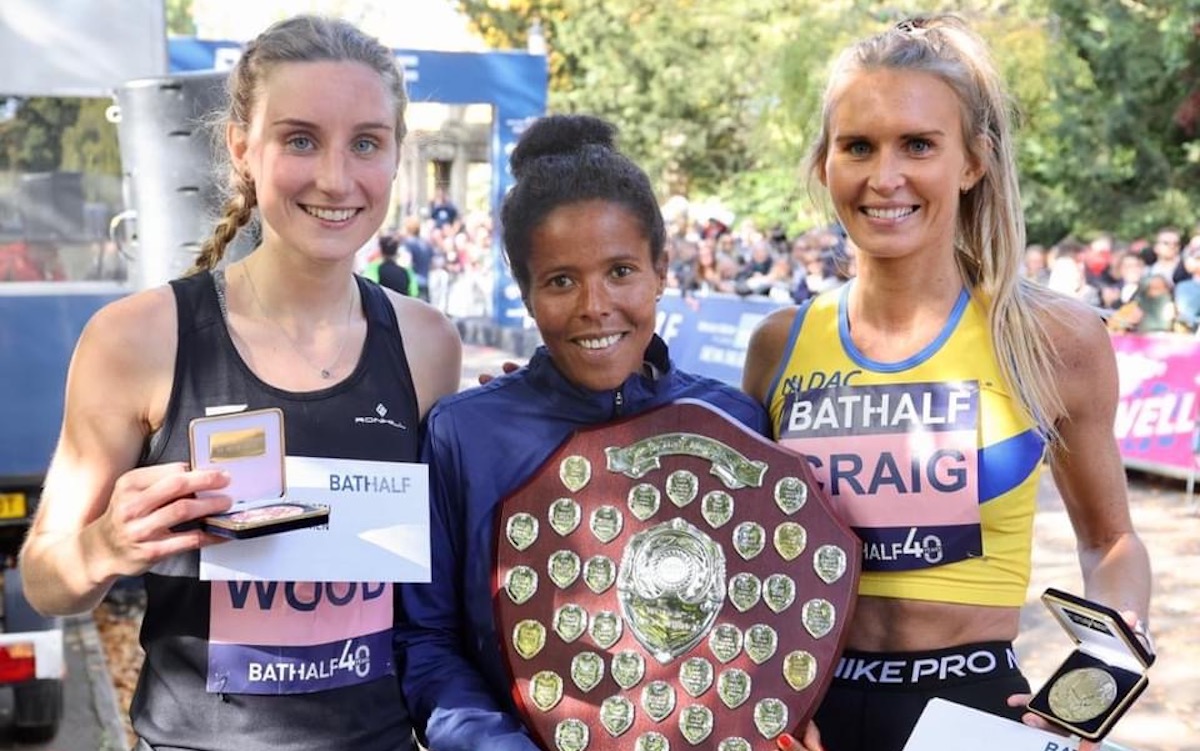 Cross Country returns with a vengeance in Cardiff, Partridge and Connor impress in Portsmouth and Atsede Gidey runs a blistering time in Bath. Gill Bland brings you the news.

One of the highlights of cross country season is the British Athletics Cross Challenge. Saturday saw the first in the series being run in Cardiff. The race was also part of the World Athletics Cross Country Tour so the quality was always going to be high. The women’s race (6.4k) was won by a familiar sounding name – Pamela Kosgei (20:31). She is indeed the younger (18 years old) sister of Brigid and this was her first race on European soil – not a bad start at all!

After showing fantastic form at the Road Relays last week, Amelia Quirk backed that up by coming home second and first Brit in 20:34. Jess Gibbon was third in 20:44. Elle Twentyman ran 20:50, Jenny Nesbitt 20:57 and Megan Keith 20:58.

In the men’s race (9.6k) Edward Zakayo won in 26:20. Having been runner up to Mahamed Mahamed at English National Cross Country Championships in February, Emile Cairess turned the tables to take the domestic win in 26:39 (fourth overall), with Mahamed fifth in 27:06, closely followed by his brother Zakariya in 27:16. Alex George ran 27:37 and Callum Elson 27:49.

The England Masters Cross Country Team Selection race took place in Markeaton. Adam Stokes (v35) was fastest over 9.6k in 36:33 and Juliet Potter over 6k in 23:20.

Other available XC results at the time of writing are as follows:

It was a great Sunday morning’s work for the Partridge/Connor household at the Great South Run as Lily topped the women’s podium in 54:29 and her partner Ben the men’s race in 47:19. It was a pretty tight race on both counts though with all the podium placers within thirty seconds of each other. Natasham Cockram was second in 54:35 and Steph Twell third in 54:51. Battling with Connor all the way, it was Ellis Cross who got closest, clocking 47:32 and Omar Ahmed with 47:49. On the previous day Zak Seddon clocked 14:51 for the victory at the Great South Run 5k with Cassie Thorp ninth overall and first woman home in 16:47.

Some INCREDIBLE times from our elite and club male entrants at today’s #GreatSouthRun! 🏅👏

Looked like it was a battle all the way pic.twitter.com/0EVdF54dgU

In Peterborough the Great Eastern Run was won in 65:57 by Norwich’s Logan Smith. Chris Darling was next home in 66:15 and Peter Robinson in 66:27. Fastest female by some margin was Highgate’s Nina Griffith in 76:03, with Alice Belcher runner up in a still-rapid 77:47 and Rosie Wild third in 79:12.

Road racing around the UK

A lovely day for racing meant more fast times at the Bath Half. Our mystery parkrun lady from last week, Atsede Gidey, won in a storming 71:54. Jessica Craig was second in 74:52 and Sophie Wood third in 75:40. A pack of three men raced ahead to leave over a minute between them and the rest of the field. The medallists all finishes in under 66 minutes – Kadar Omar 65:03, Jonathan Cornish 65:35 and Fredie Hessian 65:43

From the dark blues to the light blues – it was Cambridge’s turn to host the Town and Gown 10K. Running for the “C-Squad” Alistair Steele was pronounced first, though he and Camrbidge & Coleridge’s Fredrik Krylander both crossed the line with 32:58 on the clock. Fellow C&C AC runner Matthew Slater was third in 33:25. Jo O’Regan (St Neots) is showing some fine form at the moment and despite 10Ks not being her normal wheelhouse, clocked a brilliant PB 35:45 win. Cambridge and Coleridge were back again for second place, thanks to a 36:17 from Clare Thurgood, with Sheffield’s Eve Pound third in 36:58.

The Cabbage Patch 10’s flat course, prize pot and actual cabbage-prize always makes for a fun race and this year was no different. 1500m runner Joe Wigfield earned a gold medal and cabbage in his first ever race longer that 5k. He came home in 48:41 to beat Dylan Evans’ 49:00 and Finn Mcnally who matched his bronze placing from last year, running 49:28. For the womn, Hannah Viner was a confident winner in 56:37 – over a minute faster than her PB set at the Great South Run last year. Teresa McCormick took silver in 57:14 abd Vicki Ingham bronze in 61:32.

Marathons at home and abroad

At the Amsterdam Marathon it was the day of the Ethipian debutante’s as Almaz Ayana, Genzebe Dibaba (2:18:05) and Tsehay Gemechu (2:18:59) filled the podium on their first competitive outing over the distance. Ayana obliterated the course record, running 2:17:20. V50 Emma Stepto of Redruth ran 2:53:25 to be first British woman home. In the men’s race Ethiopia’s Tsegaye Getachew clocked 2:04:49 for the win. First Brit was Ben Fish in 2:23:41. At Amsterdam Half Marathon Joe Sagar finished fifth in 67:41.

Personally, I really rate Yorkshire Marathon – it’s a great course and the support is proper Yorkshire loveliness. So, though I wasn’t racing it this year I’m always keen to pore over the results. 2:22:56 was the winning time this year for Benard Bosuben and 2:54:18 for Samantha Antell. Sarah Lowry (2:54:25) and Keri Pearson (2:58:37) rounded out the women’s podium. Tom Charles (2:24:41) and Patrick Martin (2:28:47) were second and third for the men. We believe that may have be Charles’ third marathon in a month including Berlin and Chester…

Chris Burgoyne was fastest over 26.2 at Chelmsford Marathon, breaking the tape in 2:34:54. Anna Farello topped the women’s rankings in 02:54:33. In the Half Marathon the wins went to James Nial in 75:50 and Jackie Stretton (seventh overall) in 84:35. New Forest Off Road Half Marathon wins went to Georgia Wood and Dominic Townsend.

Owen Davies won the Salomon Cappadocia Medium Trail CMT, taking in the 63 km and f 2030+ m variation in altitude in only 5:21:59

Despite having won many hundred mile races, Centurion’s Autumn 100 has eluded Debbie Martin-Consani who has placed second twice – until now. 2022 was the year for her as so took the women’s victory in 17:58:57. Harry Geddes only has two hundo’s to his name, one being a fourth place at A100 last year. This time he upgraded it to first in 14:52:35.

Annaka Charters took a fine victory at the Run to the Sea 50km in Bournemouth finishing in 4:02:42 with the men’s title going to to Peter Lawrie in 3:36:17.