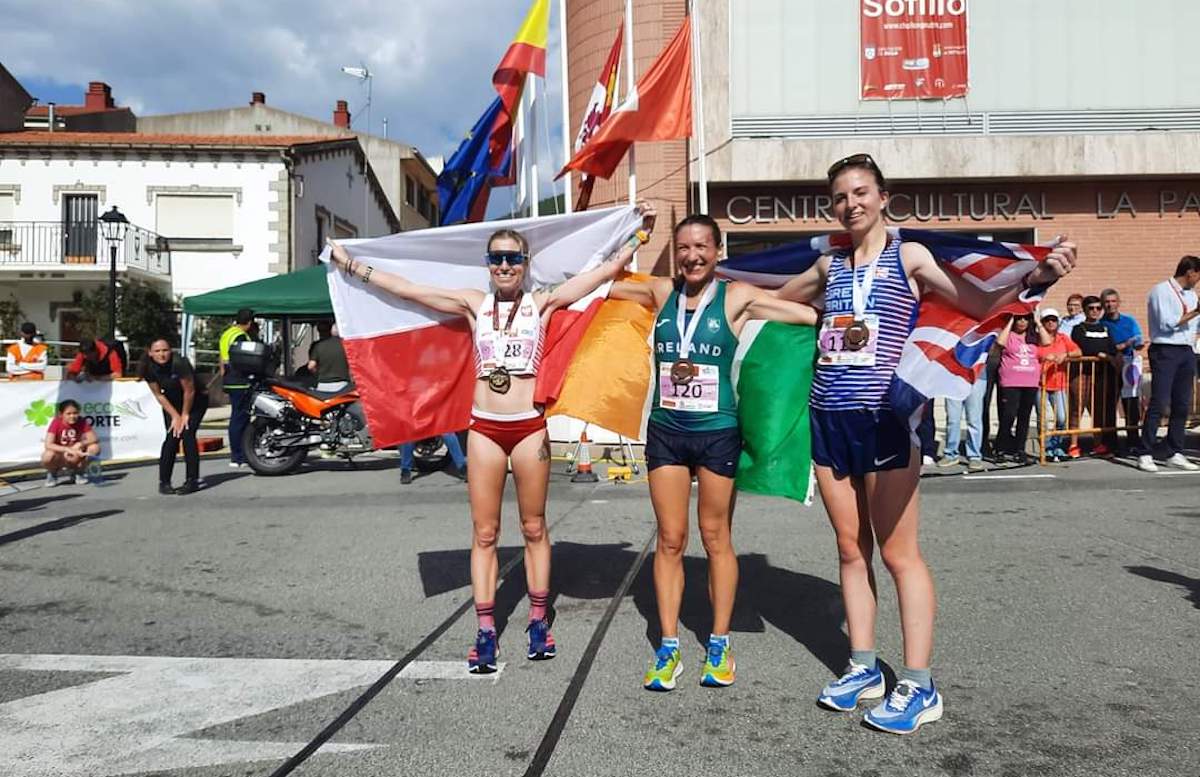 The IAU 50k European Championships took place in Avila, Spain on Saturday and GB’s Ali Lavender took the lead in the early stages. Ireland’s Caitriona Jennings took over to claim European 50k gold after her World 100k bronze in August but Lavender held on for a brilliant second-place finish in 3:21:26. That time puts her 5th on the GB all time list. The GB women’s team had some great performances overall, resulting in a team gold. Sally O’Gorman was fourth in 3:22:23, Rebecca Bunting fifth in 3:26:04 having been two minutes clear at the front of the race at one point, Chloe Richardson was 14th in 3:49:56 and Elizabeth Renondeau 24th in 3:55:30. The Valsir Mountain Running World Cup reached its conclusion at the Chiavenna-Lagunc Vertical Kilometre. Scout Adkin ran a brilliant 38:55 for second place, with Austria’s Andrea Mayr taking the win in 36:34. While not at this race, the series winner was Joyce Njeru of Kenya. After injury and post-covid issues, Jacob Adkin showed that he is returning to fine form, winning the men’s race in 32:11 – just 12 seconds clear of Italy’s Matteo Eydallin. Both Scout and Jacob are off to the World Mountain Running Championships in Thailand next month.

Marathons around the world

Kenya’s Phillimon Kipchumba won the Munich Marathon in 2:07:28 and the fastest British man was Highgate Harriers’ Tom Cowling in 2:49:25. It was a double win for Kenya as Agnes Keino took the women’s gold in 2:23:26 with Hyde Park Harriers’ Flick Burton running 2:58:58 to palace tenth and first British lady home.

Elsewhere in the world, Julia Davis was in fine form at her first post-partum marathon. Not only did she win and come fifth overall, but she set a new course record of 2;42:50 at the Palma Mallorca Marathon.

Back on home soil there was plenty of fun to be had in all forms of racing. XC is just starting to kick off (results are notoriously difficult to get hold of in time for the round-up so do send them in) but before it gets into full swing it was time for a classic in the club-calendar – the National ERRA Autumn Road Relays at Sutton Park. Tonbridge AC took the win in the women’s race in 58:26 thanks to Lucy Thompson (15:48), Phoebe Barker (14:20), Nicole Taylor (14:08) and Lucy Reid (14:10). Salford Harriers were second in 58:37 and Aldershot, Farnham & District third in 59:09. Fastest of all the legs was a lighting speed run from Bracknell’s Amelia Quirk who clocked 13:38, with Lincoln Wellington’s Abbie Donnelly logging 14:00 and Blackburn’s Jess Judd 14:02.

Roads and Parks around the UK

This morning we have seen perfect conditions for running and some of our speediest runners have already crossed the line.

Dan Bradley (75:18) edged out Matthew Jones (73:50) at Tonbridge Half Marathon with Oliver Waymark collecting third in 76:43. Helen Gaunt was over 10 minutes clear of her nearest rival, taking gold in 79:42.

The parks of London were apparently filled with runners this weekend. Richmond Runfest hosted a range of races over two days – Kew Gardens AIR 10K was won by Jordan Bryant (36:20), Imogen Parker-Elms and Lily Zechmann (both 38:44). On Sunday, both half marathon winners took their victories with over three minutes clear – Ollie Garrod in 72:51 and Clare Rosdeth 83:38. The marathon top spots went to James Baker in 2:37:18 and Rachel Dent in 3:15:18.

If you wanted to run a 10K this weekend and didn’t then there’s no help for you as it seems like every town had its own race. Here’s a whistlestop tour of some of them.