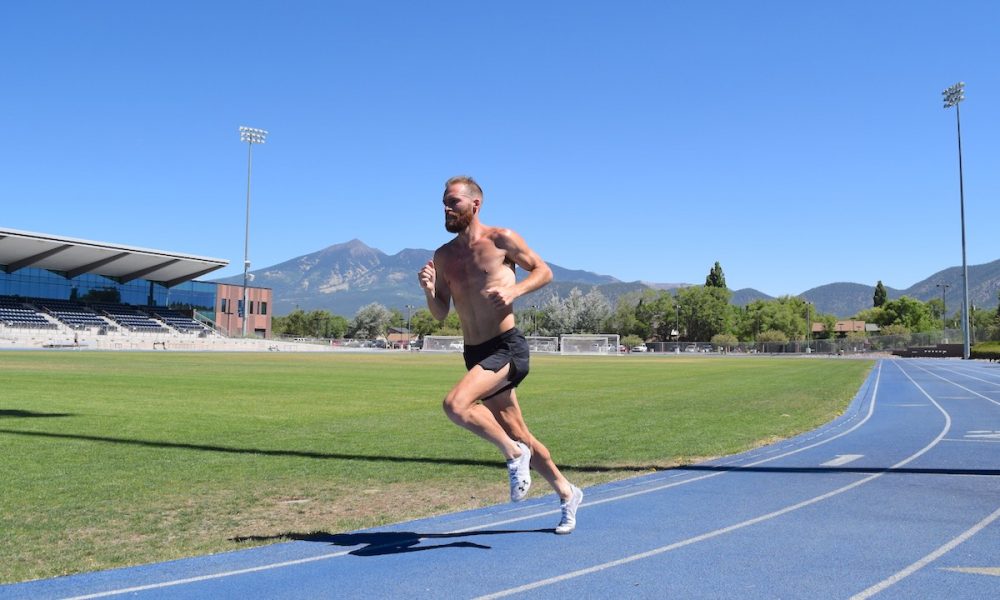 The Arizona-based athlete recently ran a big 28:36.05 10,000m PB at the Portland Track Festival in Oregon to comfortably qualify for the European Championships in Berlin.

Stephen Scullion is an athlete whose name has been in the mix in discussions about the cream of the British and Irish endurance talent crop for nearly a decade.

The 29 year-old Irishman is something of a stalwart of the elite end of domestic road racing, running consistently under 30 minutes for 10k since 2010, and adeptly turning his hand – or racing spikes – to the country too.

The multi-faceted distance runner ran for Ireland in the European Cross Country Championships in 2013, where he finished 63rd, and competed in the World Mountain Running Championships the previous year too.

This year, however, Scullion is concentrating on road and track success, and if the second half of 2018 is anything like as impressive as his first then he could find himself fighting for a medal in the German capital.

On Saturday night the Flagstaff-based athlete ran a huge 22 second PB when finishing fifth at the prestigious Portland Track Festival in America in a European Championships qualifying time of 28:36.05.

We chatted to the amiable Northern Irish star about his success so far this year and how he’s managed to improve so impressively over every distance from 10,000m on the track to half marathon and the marathon on the road.

Fast Running: Well done on your new 10,000m PB! You finished well inside the qualifying standard of 28:55, can you tell us about your race strategy?

Stephen Scullion: I’m happy with the result. The fact I can suggest it was pretty comfortable tells you how hard I’ve been working over this past year or so.

I actually had a conversation with Andy Vernon before the race, and mid-conversation it became pretty obvious to me it was important I didn’t kill myself in the race. Racing around 90-95% effort gave me every opportunity to recover a little faster to help preparations for the European Champs, which are only just over eight weeks away (the men’s 10,000m final is on August 7th in Berlin).

Usually, I’d go really hard with two to three laps to run, but that’s the point of the race – I knew I was well under the time, and that I didn’t have two to three weeks to recover.

FR: You chose not to race the Highgate Harriers 10,000m, was that because you didn’t feel recovered enough after your fantastic marathon performance (2:15:55 PB) in London?

SS: With London, it was a somewhat similar situation to the Portland 10,000m – I knew I was fit and able to run the standard, but to be honest I was actually a lot fitter at the end of February.

I came off the Houston Half Marathon (where Stephen ran another big PB of 63:16) and trained really well in Flagstaff for another four to five weeks, averaging around 100 miles a week for over two months of work at 7000ft, but I ended up getting sick, and then I fell in the snow.

So my ambitions for a big result at London changed a little and I decided to just try and hit the European qualifying standard. I knew that was well within my capabilities if I was able to get training going smoothly again after the World Half Marathon Championships (where Stephen ran 65:19 in hot and windy conditions in Valencia) and get to the London start line healthy.

Maybe that actually helped – because of the hot temperatures, I ran with a slightly cooler head. Highgate was just a little too early, I recovered quickly, but it’s not easy to go from being very good at burning fat and running 5:05-10 per mile, to trying to run 4:35 per mile, that takes a few weeks, or even months for some people. FR: A couple of weeks before the London Marathon in April you had top performances in the Omagh Half Marathon and the Titanic Quarter 10k in Belfast on the same weekend. (Stephen ran 67:01 and 30:29 in a 24 hour period) How did you manage it?

SS: That was just a bit of fun! Sometimes training solo can be tough, and I just had this idea in my head that I could win both races. In the scheme of things, the times weren’t anything I don’t already do in training.

The Friday before the half marathon I had 15 miles around 5.10-15 planned, (and I ran four miles on road at 7000ft last week much quicker than I raced the Portland 10,000m), so mainly I just use these races as training sessions.

The organisers do a great job, and it’s like having a marked loop for a 10-13 miles threshold session. Then you get treated like a little celeb post-race, and funnily enough I had just sucked at the World half, came home hating life, then I rock up to these races and people think I’m great, so that’s pretty cool!

FR: You seem to be in the form of your life, what do you put that down to?

SS: Keeping things simple, being disciplined with my social life and working hard. In 2013 I ran 7:58 for 3000m, and then just a few weeks later ran 64:46 on the very tough Omagh half marathon course in Ireland – the same course I just ran 67:01 on that double race weekend – trust me, that’s worth about 63:30 at Houston.

In 2013 I used to run 70-80 miles per week and retired every 12 weeks, probably partying once or twice a month too! Andrew Hobdell was coaching me then and he’ll tell you, I used to text him saying ‘Andy, that’s an 85 mile week, wow’!

So it might be surprising to some people with my new PBs, or these little breakthroughs, but there will be a few coaches and athletes out there who have had an impact on my career, and they’ll know it’s no surprise, and I’m sure they’ll also know it’s just the beginning.

The only difference now is I can accept losing, I don’t quit every four to five months, and I’m a much calmer person, so it’s easier for me to train consistently well, without going crazy. I’ve had a few coaches and athletes tell me I could break 3:40 for 1500m and 2:10 for a marathon with my range of skills and physiological profile.

FR: Who’s coaching you these days?

SS: Stephen Haas is my coach, he was an American distance athlete and ran 28:20 for 10k and 7:50 for 3000m. He was a good runner, but probably an even better agent and coach. He’s lived and trained in Flagstaff for five or six years now, and he’s worked with athletes who are far better than me.

I also communicate with Alan Storey, who I grew very fond of during our short period of work together. Alan has helped me with the physiological side of things, and race prep for London amongst other things.

Alan is by far the most knowledgeable person I’ve ever had the pleasure of picking their brain in this sport. For example, things like the heat before London, conversations about dealing with that, or just politics sometimes within the sport. We’ve had a laugh or two about some issues I’ve perhaps come up against, many of which were mainly self-inflicted!

But he’s become a very good friend, and somebody I hope I will always be able to rely on if I’m ever in need. Alan told me after a few bad races he’d be there forever whether things went good or bad. That’s a really nice thing for anybody to say to you.

FR: Where do you live these days?

SS: I live between Belfast and Flagstaff Arizona. Stephen (Haas) has put a really good set up in place for me in Flagstaff, but I also work with Athletics Northern Ireland to produce a similar set up in Belfast, most recently during March and April this year.

I was able to spend my final eight weeks leading into London there, and had access to physio and physiological profiling in the sports institute, which helped monitor speeds for London fitness.

FR: Do you have any races lined up before the Europeans now?

More than likely I’ll be focusing on the 10,000m as priority number one, and then hopefully the 5000m will be a nice bonus with no pressure.

FR: Can you give us an insight into a typical week’s training?

SS: We keep training super simple, which I manage to fit around my job as a website developer. I try to run 100 miles a week, most weeks, providing I’m not trying to recover, travel or race. All my training is on Strava, there are no secrets!

I respond well if there’s a consistent pattern to my training, so I aim for four to five-week blocks where I do a medium long run every week.

Wednesdays are usually 12-14 miles, Sundays are 16-18 miles, nothing crazy, just getting it done, sometimes adding a little progression in there. Mondays, Wednesdays and Thursdays are really simple, double runs at an easy pace, often 6:30-7:30 pace but it’s irrelevant, it’s just ‘easy’.

Tuesdays and Fridays are a little more specific, but as I feel like I respond well off mainly strength type training, there’s nothing crazy going on during these sessions either. One example might be 8-12 miles of threshold running, sometimes 6-8 miles at 5:30 pace, then 4-5 miles at 5:10 pace.

However, it’s not about training really hard, or training pretty hard and living like a beast, or being willing to dedicate the other 22 hours of your day to being obsessed by improving. I can’t express that enough!

Relax in sessions, relax in training, but focus on being a much better professional off the track.

Every third or fourth week, if my body allows we can do a slightly more key session, and I can get after it a little more then.

FR: Do you train with anyone or mostly solo?

SS: In Flagstaff I have plenty of company for most runs during the week, but for sessions I’ve mainly been solo.

In Belfast it works very similar – I have company for runs with a few guys who are actually training for 32 marathons in 32 days, the ‘CU32’, they are Noel McNally and Niall Farquharson.

So that works pretty well, I don’t mind sessions solo, but it’s tough when my coach travels to races and I’m completely solo.

Similar in Belfast, some sessions for the marathon I’d be doing 25 miles with 3 x 5 miles in there, completely solo. That can be tough, but it’s something we’re trying to work on, and to make sure I have somebody cycling or running with me.

FR: Finally, is there anything our readers wouldn’t know about you that you think would make us laugh?

SS: I believe the earth is flat! (We THINK Stephen’s joking!)