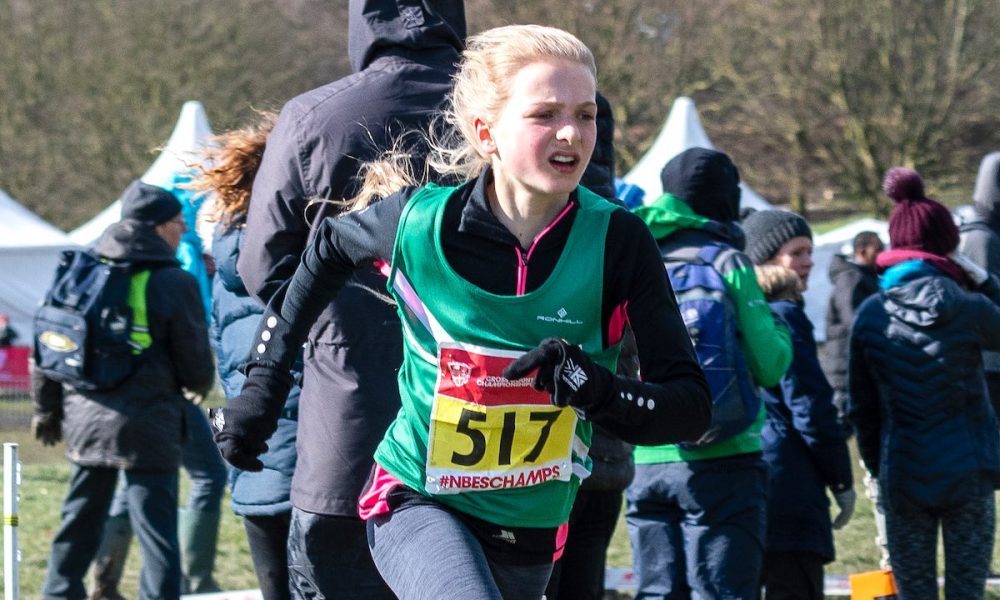 When Bea Wood crossed the finish line at Salisbury parkrun in an incredible 16:56 at the end of May, her time was soon confirmed as being the fastest ever for an U17 athlete in the UK – she’s still just 14 years old.

A month earlier Wood clocked 16:38 for three miles at the London Mini-Marathon, beating her nearest rival by an incredible 27 seconds.

Her most recent success came at last weekend’s Wessex Young Athletes’ League meeting at Woking, when she won her 1500m race in a new PB of 4:26.3, cementing her position at the top of this year’s U15 rankings and placing her eighth on the all time tables.

As is often the case, Wood’s super fast track and road times have come off the back of a hugely successful cross country season, which saw her take titles at the SIAB Schools and Home Countries International at Wollerton Park, the English Schools cross at Leeds and the South West Inter Counties at Yeovil with apparent ease.

The only ‘blip’ on her otherwise perfect cross country record was a bronze medal at the Southern Championships at Brighton, but even then the precocious young talent had come into the event still struggling with the after effects of flu!

Her most recent PB over 1500m knocked two seconds off her previous best recorded just three weeks earlier. Just eight days before that the speedy teen had run yet another PB for the distance at her first mixed race at a BMC meeting at Street in Somerset. How did the diminutive City of Salisbury athlete feel about her first experience of racing on the track with male runners up to five years older than her?

“It was really strange, it was very intense and there was a lot of pushing from the boys!” she explains. “It soon became clear that it wasn’t like track races I’d done before, it wasn’t about positions but everyone was out for themselves and a time, including me! I was pleased with my time but still wanted more.”

That statement sums up the South Wilts Grammar School student. She always wants more from her racing, and is keen to keep improving her 1500m time as the season progresses.

“I’ve wanted to top the all time U15 rankings for ages, (a position currently occupied by Chelmsford and Great Britain’s Jess Judd, whose time of 4:21.03 seems within reach for Wood at her current rate of progression), and I have until September to do it, as I turn 15 in October,” she explains. “I have a couple of track races coming up but the next big event to aim for is the South West Schools Championships at Exeter on June 16th, followed by the English Schools in July.”

Wood’s carefully planned racing schedule is in large part down to her coach, Dave Amey, an athletics stalwart and a member of City of Salisbury AC for more than 60 years.

Amey has coached Wood ever since she arrived at the club when she was 11 years old, leading her track sessions every Tuesday and Thursday (where she trains with the boys, including 4:39 13 year-old Lukas Bailey).

She also takes part in a cross country club at school on Wednesdays, but an easy run on the weekend is her only other session of the week, unless she’s racing. She never listens to music when she’s running, preferring the sound of her own breathing, which allows her to better concentrate on her rhythm. Bea and her City of Salisbury club mates were unable to use the track from November last year until this March after the council handed management of it over to the adjoining school, making her achievements all the more remarkable.

Swansea AC and Great Britain’s endurance talent, Verity Ockenden, who regularly trains at Salisbury, recently wrote for Fast Running, and she explained, like Bea and her club mates, how disruptive the track ban had been to her training.

The younger Salisbury athlete added: “It was really hard as we had to train on slippery pavements in the dark instead of a well-lit track, I’m so glad we’re allowed back on it now!”

RELATED: Getting back on track at Salisbury

Such is her love for the track she names it as her favourite surface to race on, as she says “it’s really exciting, it’s all about times and then after your event you can just relax and watch other people competing”. That said, Wood is also a big fan of cross country, adding “although it’s messy and muddy and the weather can be awful, I still love it, every course is different – I love road too, I love it all!”

The rankings topping athlete clearly has an innate passion for the sport, and compliments her fitness with tennis, football, cycling and swimming when she can fit it in, alongside family walks up mountains in Cumbria, the Scottish Highlands and Snowdonia. The Woods spent the recent half term in the Welsh mountain region walking and camping, perhaps highlighting one of the reasons why Bea is so active herself. The youngster’s success at City of Salisbury AC has so inspired her dad, Stuart, that he has joined himself up to the burgeoning South West club: “I won’t be competing much myself, although I would like to try some 10m races and half marathons at some point!”

Who is it that inspires Bea?

“On an elite level it’s definitely Laura Muir, I so admire her for juggling her degree and international running so well, and she seems so down to earth,” she enthuses. “My cross country coach at school, Mr Butt, is also really supportive and takes us to all the school competitions, and I love spending time with Molly Hole from my club and school too (Molly currently tops the U17 high jump rankings with her 1.79m PB).

“However, I’m just generally inspired by anyone who runs, it takes a special kind of person, a strong person, to push themselves in this sport.”

Once Wood has finished her final track season as an U15 (during which she hopes to run under 4:21 and top the all time age group rankings), she may try a 3000m race before cross country training begins.

“I’ve only ever run one 3k on the track but that was in PE at school, I hadn’t warmed up at all and I was wearing trainers,” she explains. “I ran about 9:45 so I’d like to see how much quicker I could run with better preparation and kit!

I’d also like to do my first 800m at some point, but most importantly I want to continue to enjoy my running. One day I’d like to get to the Olympics and the World Championships of course, but for now, it’s all about enjoyment.”

Set for #parkrun tomorrow? This did happen last week… 14 year-old Bea Wood ran the quickest women's time at parkruns across the UK!