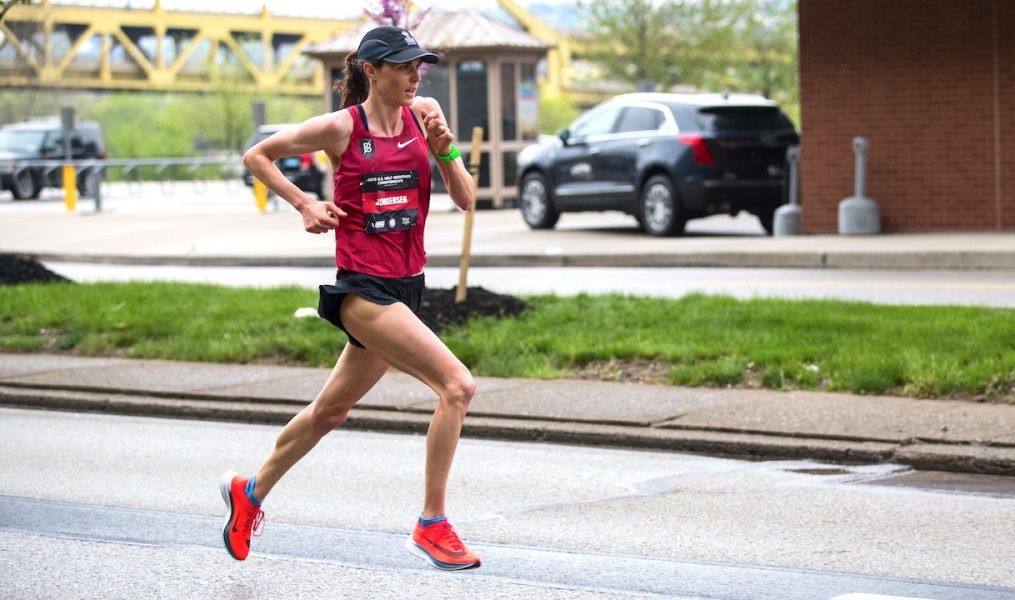 The Olympic triathlon champion turned marathon runner has been documenting every step of her journey towards Tokyo 2020.

Everyone should have goals, ambitions and dreams, but most, even those who are the best at their craft, keep the loftier of these ambitions to themselves or only reveal them to their inner circle.

Gwen Jorgensen isn’t your average person or athlete though, and when the reigning Olympic triathlon champion decides to set an almightily high target, she tells the world.

In November 2017, a few months after giving birth to her son, Stanley, the 32 year-old announced she would transition to the marathon determined to win Olympic gold in the running only event.

Jorgensen didn’t say it quietly or aim to give herself a wide window of multiple Olympic cycles to do so. She publicly announced it to all 270,000 of her social media followers and the world. And most impressive of all? She aimed to achieve the feat at the next Games, Tokyo 2020.

“A big goal motivates me,” Jorgensen tells Fast Running. “I find that when I set a big goal, it holds me accountable and excites me for training.” Putting this in perspective, no American woman has won Olympic gold in the marathon since Joan Benoit Samuelson in 1984. This was also actually the first time women raced over 26.2 miles at the global competition.

Since making the bold announcement, the only American woman to ever win triathlon Olympic gold has been documenting her journey on YouTube and across social media, covering every moment in training and races to life away from running as a new mother.

Team Jorgensen behind the camera

Leading the team behind Jorgensen is her husband Patrick, who wears many hats alongside being a supporting husband. He is an integral part in documenting the journey and driving the ‘Gwen Jorgensen brand’. “I believed documenting this story was incredibly important as Gwen takes on this challenge,” he says. “I think back to our time spent in triathlon and I would have loved to recall on old footage to relive our story. I also want to show that Gwen is a normal person that works incredibly hard.”

Team Jorgensen has definitely achieved that so far, but what makes the coverage stand out from other athletes who are active online is the level of professionalism in the content produced. From the video editing to the soundtracks in the background, it is ‘Hollywood like’ at times.

“My job is to help steer Gwen to the finish line first, but building and developing her brand is something that is also important,” he continues. “I want to bring a level of professionalism to endurance sport that is usually missing.

“Earlier in the year, Gwen’s photographer and I had this master plan of all the videos we would capture, but I don’t think we have followed the plan once. We plan all of the logistics but we strive to just document the process and not create.”

To date, Jorgensen has one marathon to her name, which was a few months after the Olympics in 2016. Without any specific marathon training, she debuted with 2:41:01 in New York. Most impressive of all, the Wisconsin native completed a three-race triathlon six days prior.

“I definitely have more miles in my legs now, but I still need a lot more,” she says looking back on her debut marathon. “In triathlon, when I started I needed to just ride to get the miles in the legs. The same is true in running now. I just need to get in the miles, and that will take a lot of time.”

Leaving no stone unturned on her quest to conquer the historic distance, she is training with Amy Cragg, Shalane Flanagan and a host of other talented athletes, under the watchful eye of coach Jerry Schumacher at the Bowerman Track Club. Not bad company at all! “I like to surround myself with people who are better than me,” she explains. “This shows me what the world standard is and pushes me to step up to their level on a daily basis.

“The Bowerman Track Club is phenomenal. I am so honoured to be a part of the group, especially since I am an unknown. We don’t know what my limits are in running. I believe I have room for a lot of improvement and I’m so thankful Jerry agreed to help me.

“The women on the team are as good as they come. They are welcoming, honest, nice, caring, and thoughtful. I run with the girls daily and always feel refreshed after meeting and running.

“We chat and the runs just fly by. On hard workout days, everyone is uplifting and encouraging. It makes you want to be a better person, just being around them.”

Her first ‘real test’ over 26.2 miles as a full-time marathoner is in Chicago this October, where she forms part of a stellar field that includes Jordan Hasay, training partner Cragg, Mo Farah and Galen Rupp.

However, going back, her first race after deciding to focus on the marathon was in February, where she clocked a quick 15:15 over 5000m. Following that she posted an impressive 31:55.68 to win the 10,000m at the Stanford Invite in April, slicing almost two minutes off her previous best.

“I wasn’t looking for a PR at Stanford, instead I wanted to race for the win,” she says. “I was hoping the pace would have been faster, but I was pleased with how I raced tactically.”

That performance was seven months after welcoming her son, Stanley into the world. It was a big moment for Jorgensen, who returned to training seven weeks after giving birth.

When asked about her transition back to running post birth she explains that wasn’t straightforward: “I found it slow. Looking back, it seems like a very fast transition after seven weeks.

“I started run/walking, but it was painfully slow and I didn’t feel like myself. I started back with one minute of running followed by five minutes walking. It took almost another two months to be able to do a continuous 20-minute run.”

Her son celebrated his first birthday in August and when asked if motherhood has changed her outlook on running, sport and life she adds: “My goals are the same after giving birth to Stanley, but I have found if I come home and am worried or stressed, all that disappears the moment I see my son.

“I have never labelled myself as an ‘athlete’ first. I always have thought of myself as a person first, so it’s now nice to just say ‘I’m a mom’ when people ask me who I am.” As mentioned, Jorgensen has been documenting her story with fly on the wall coverage, and, if her journey was a fairy tale, we mere mortals would be in awe as we watched her smash PBs and win races before celebrating with marathon gold in Tokyo.

However, this is the real world, and her debut over 13.1 miles at the Pittsburgh-hosted USATF Half Marathon Championships in May, showed us that things don’t always go as they were scripted.

She ran a debut 70:58 to finish fourth, a good half marathon performance – but when your name is Gwen Jorgensen ‘good’ doesn’t quite cut it, even if the only athletes in front of you are Aliphine Tuliamuk (PB 69:16), Sara Hall (PB 69:27) and fellow debutant Rochelle Kanuho.

“I was hoping I would be in the mix for the win, so to come away outside the podium is not something I was happy with,” she says “It was a tough race. I found the course to be hilly with a lot of turns.

“Aliphine, Sara and Rochelle were outstanding. Aliphine and Sara were tough from the gun, taking it out and really racing the course. I struggled and was exposed on my weakness. But, the race was so well put on. I loved being there.”

This was the first plot twist and credit to Jorgensen and her team for publishing the ‘Humble pie for breakfast’ video within hours of crossing the finish line.

It detailed the morning of the race right up to her thoughts post-race, and it helped to show the human side – and a low point – in her journey.

She returned to training and bounced back with two 10k performance of 33:10 and 33:21 in July and August and now has her eyes and focus firmly fixed on the Chicago Marathon in October.

The whole world will be watching and, regardless of the outcome of the race, it is another stepping stone towards Tokyo 2020. But let’s not forget even making the US team will be an achievement given the current strength and depth of American women’s distance running.

Finally, when asked how she deals with the expectations placed on herself and the added pressure from so openly sharing the journey with the public she says: “My family and friends are a great distraction. It helps as well that I don’t see myself as an athlete, but instead as a person, and a mom.”

A take away that all athletes can learn from Jorgensen is dream big, set lofty goals, and don’t be afraid to fail. If you are happy to, document and share it with the running world. As fans we want to see it all; the wins, the dedication, the bruises and your life away from running. Most importantly, it lets us see that athletes like Jorgensen are only human, which helps us to dream big too.

17 year-old Grace Brock runs 34:24 10k debut in Worcester
Marc Scott is the UK’s fastest over 5k this year… but he wants more