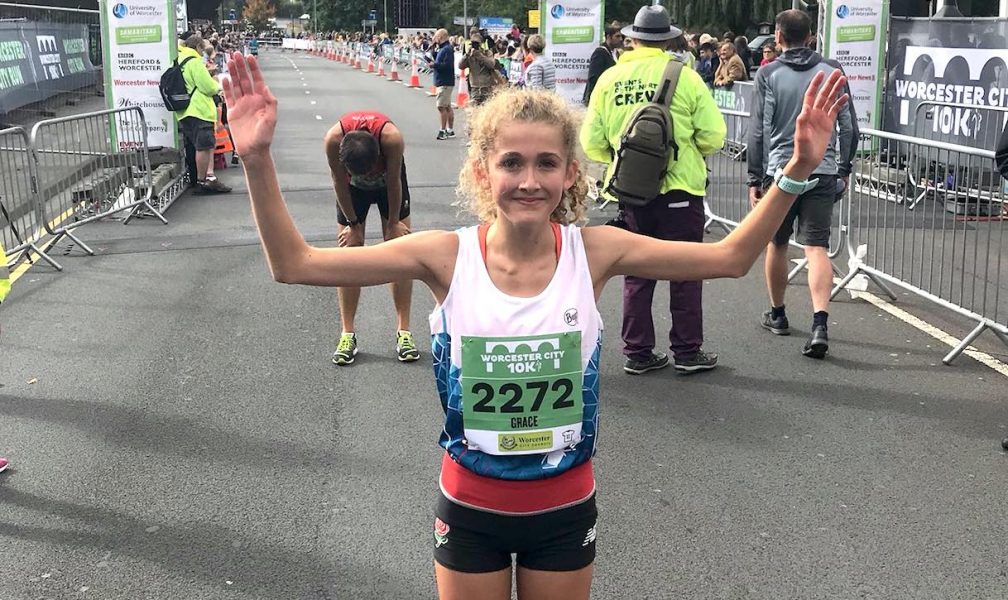 Fast times by teenage athletes seem to go hand in hand with the South West road race and Sunday’s event (September 16) witnessed one of the fastest – if not the fastest – 10k’s by 17 year-old Grace Brock.

Brock’s phenomenal 34:24 10k debut saw off competition from Louise Small and Jo Moultrie along the way. What is even more incredible is that she only turned 17 six months ago, and is a mere month into her new U20 age category.

In 2014, Worcester AC’s Jenny Nesbitt not only upset the form books but destroyed them when she beat world marathon record holder, Paula Radcliffe. Nesbitt was just 19 years old when she ran an uncannily similar 34:21 on her own debut over 10k.

Looking at the rest of Brock’s performances this year – and her future plans – it would seem the Cornish youngster has much to be excited about.

While it is difficult to say where her time ranks her in the all-time rankings as a 17 year-old in the UK (RunBritain rankings don’t break results down by age – just age category), or worldwide, it is certainly the fastest 10k for her age in at least a decade.

Her parkrun PB of 16:51 recorded in August at Brighton & Hove took her to the top of the all-time UK U17 rankings. The Penwith College sixth form student is no slouch on the country, either. She won the Cross Internacional de Italica in January before taking the titles at the Southern Cross Country Championships and then the Inter-Counties.

Brock was only beaten to the National cross country title by Liverpool’s Ella McNiven, who herself has just turned 17. The future is certainly bright for this country’s teen athletes.

Can we keep the younger generation in the sport and ensure they transform their young talents into senior glory?

Brock is intent on doing just that. The Year 13 pupil is keen to combine her university education with elite-level athletics in the US, and has already visited Portland University’s campus in Oregon.

“It is a great set up there, with the city and the forests, and the chance to train at altitude just one hour away from the campus,” she enthuses. “I am also set to visit Providence and Boise State universities before I start to make a decision in November.”

Before she jets off to America next autumn, she has unfinished business on home turf.  With the cross country season about to kick off in less than a month, the British Athletics Cross Challenge Series is high on her list of priorities.

RELATED: A look ahead to the racing season

“I’m also really looking forward to running the championship races, and hope my increased mileage will help my endurance over the country,” she adds.

The self-coached athlete has gradually upped her training following an end of track season break, and reaped the benefits on Sunday with her superb 34:24 debut. Providing an insight into her training methods and what an average week looks like, she says: “I have been running and racing for six years now, so I just know what works for me and what doesn’t. My mum is a licensed coach so I can ask her questions if I need to, and can train with others at Cornwall AC too.

“I tend to run easy miles on Monday and Wednesday, a grass session on Tuesday – which will be anything from one to five minute reps – a tempo run finishing with hills on a Thursday, and I always completely rest on a Friday.

“Saturdays are for beach training, something I’m very lucky to be able to do living down here in Cornwall. I tend to mix it up on the beach, but it usually involves repetitions of an 800m loop with some sand dune efforts. Sundays are long run days, which I have recently increased to 70 minutes.

“I have also really focussed on improving my nutrition and sleep to allow for the extra miles.”

Adequate rest and recovery are crucial for any athlete

It is even more so for one so young, with the added energy-sapping long journeys to races that come with living in the South West of England.

“My mum is amazing as she drives me to all my races, and my college has been really supportive with allowing me to leave early on Fridays so I can get to places like Liverpool the night before big events,” she explains.

Further, the teenage star is also mindful of the need to work on injury prevention as she asks more of her body with every race, together with good quality kit.

“I am very lucky to have Andrew McCauley as my strength and conditioning coach, as he is always assessing my weak areas and giving me exercises to help me correct any issues I may have,” Brock adds. “I am also really grateful to At Your Pace (Cornish sports shop) for their support in providing me and the rest of their youth squad with vests and shoes.”

Support is such a key ingredient in any athlete’s progress through the ranks, particularly in the teenage years.

Brock not only has to juggle her final year of school, where she is studying geography, psychology and history at A Level, with elite athletics. She also has to stay healthy, focused, but most importantly of all, stay as in love with the sport as she is right now to succeed at the top.

With the support she has from her family, club, college, physiotherapist and At Your Pace, there is every chance she will continue to achieve great things in athletics.